Man, winning a series is tough. At least, it seemed that way in this afternoon’s game, which flirted with becoming an evening one. The Diamondbacks and Rockies battled long and hard for a late-April victory, plowing through their bullpens in the process. Ultimately, though, one team was unable to answer the bell in the late rounds.

Details about the pitching massacre and wild ride after the jump.

Arizona jumped all over Greg Smith right from the start. In fact, the Diamondbacks did six runs’ worth of damage in the first without even recording an out. The big damage: an RBI double by Justin Upton, a two-RBI double by Adam LaRoche, and a three-run bomb by Chris Young. Smith finally hobbled his way through the inning, working through an additional walk and another RISP spot with two outs, but his day was done after just one frame. Smith’s line: 1 IP, 4 H, 6 ER, 3 BB.

Of course, no six-run lead can be safe for these Arizona Diamondbacks, especially once they lost starter Kris Benson in the third to shoulder tightness. By that point, Benson had already given up a solo shot in the second, but it was his limited time in the third that started the unraveling. By the time he was pulled, the bases were already loaded with nobody out. Enter Leo Rosales, whose only goal seemed to be making Greg Smith’s numbers seem reasonable. He allowed all three of Benson’s runners to score and then added six more for good measure. Watch the collapse unfold between the third and fourth before your very eyes! Marvel at the ineptitude on display! See the bearded lady! But enough about Roseanne. Here’s the blow-by-blow:

For those who disdain counting, that’s 10 runs on 9 hits, 3 walks and a HBP. And yes, in terms of protecting a lead, that’s doing it wrong. A miserable stretch in every sense of the word.

As a litany of Diamondback fans prepared their torches for an assault on Mount Bullpen to kill the seven-headed beast, the clouds suddenly parted and a ray of sunshine leaked through. The offense broke through against Matt Belisle, who had handcuffed the D-backs through the fourth. In the fifth, consecutive doubles by Tony Abreu and Upton and a walk by Mark Reynolds chased Belisle, and Chris Young later added an RBI single to score two more. Suddenly, the score was 11-9 in the top of the fifth, and it seemed like the madness would never end.

Thankfully for the sanity of fans of both teams, the next two and a half frames were relatively uneventful. Only one baserunner reached in that span, another walk by Reynolds. In fact, other than Rosales’ nuclear meltdown while he struggled to get four outs, the bullpen pitched very well today.

The Diamondbacks were able to tie things back up in the eighth, tagging setup man Rafael Betancourt for two more runs. A leadoff single by Parra and a one-out double by Stephen Drew put runners on second and third. Johnson drove in a run with a groundout, and Abreu followed with a base hit to left to plate Drew. And just like that, the previous eight innings of craziness were rendered moot, as everything was reset for the ninth.

Arizona wasted a chance to win in regulation. Franklin Morales came in to pitch and promptly plunked Reynolds. Young and Snyder followed with back-to-back one-out walks to load the bases, but Hester grounded out to force Reynolds at home (on what was an extremely close play. Unfortunately, we got the wrong side of the call. Oh, and Tulowitzki was given a double on the play). A harmless fly ball by Drew ended the inning and the opportunity.

Bob Howry, coming off a 19-pitch eighth, retired the side with ease in the ninth to send the game into extras. And there, Kelly Johnson crushed a pitch into the seats in right for what ended up being the winning run. Juan Gutierrez cleaned up in the bottom of the 10th pretty easily to end up with his first save of the season, and there it was. A win. A series win. A relatively heart-attack-free finish. A decent outing from bullpen members not named "Leo." And our second straight series win after dropping three in a row.

As usual, seatbelts and arm floaties are required for maximum safety on the Fangraph. 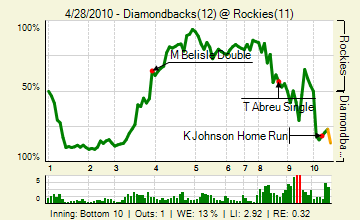 Let’s review the damage. Reynolds reached base the most times despite not getting a hit (3 BB, 1 HBP). Abreu added three hits. Young and Upton both had a pair of hits and a base on balls. Johnson had a knock and a walk. Even Dan Haren managed to get a pinch-hit single. Though most of the talk in this game was about Rosales’ abomination of a performance, the rest of the bullpen stepped up. Vasquez struck out four in nearly three innings, throwing 47 pitches. Heilman had a scoreless inning. Howry got the win for his sterling work. Gutierrez pitched a perfect 10th.

Only word so far on Kris Benson is that shoulder injury, the extent of which is not yet known. Though Kevin Mulvey had a good start last time out, I’m not sure we want Benson to be out for any significant time right now. And let’s be honest: only the late comeback by the offense kept this game from becoming 2012 for our tattered bullpen. Had the game ended after the fourth, I’m pretty sure various bullpen members would be packed into crates and tucked away somewhere by top men. Top men.

Tomorrow, the Diamondbacks are on early once again as they take on the Cubs in a 11:10 start. Your doctor recommends copious amounts of Maalox before watching.