Diamondbacks 1, Rockies 12: Did I Miss Anything?

Share All sharing options for: Diamondbacks 1, Rockies 12: Did I Miss Anything?

That loss would probably have hurt if I'd bothered to watch it at all. Mrs. SnakePit said she was going to help her sister pack up for moving house later this week, and I offered to join her: "I'm sure the Diamondbacks can do without me for one night," I said. It appears not. Still, if I was going to miss a game, then might as well pick one where the offense got shut down and our starting pitcher had something short of his best stuff, shall we say.

Details after the jump, but both due to the nature of the game and the fact I didn't see any of it, do not expect this to be one of my more insightful recaps.

Edwin Jackson joined a small, exclusive club this evening, albeit one he'd rather not be part of. He became only the fifth pitcher in Diamondbacks history to allow ten earned runs in an outing, the first to do so since September 2004. Here are all the members of our pitching hall of shame; links go to the boxscore in question. Trivia question: what's particularly remarkable about the first pitcher to do it, Eddie Oropesa?

Is there anything more that needs to be said about tonight's performance? Probably not. It was clear from very early on that Jackson didn't have his good stuff, with the Rockies teeing off almost at will. Three runs on four hits in the first, four on five in the second, and two more singles and a walk in the third saw AJ Hinch finally reach for the hook. Blaine Boyer came in from the bullpen with one out, walked three of the first four batters faced, including one with the bases-loaded, and ended up with four walks before escaping the inning. 11-0 to Colorado after three. Yes: taping boxes and shuffling storage bins was certainly preferable.

But, hey! We fought the Rockies to a 1-1 tie over the remaining six innings! Admittedly, one has to wonder how hard the Colorado hitters were trying, but the B-bullpen did okay. Boyer allowed one more run in his two innings, while Bob Howry and Aaron Heilman combined for 3.2 shutout innings of work, albeit in what can only be described as "low-leverage" situations. When Howry came in, Arizona's Win Probability was a princely 0.2%, and by the time Heilman showed up for the bottom of the eighth, it had completely flat-lined. Still, maybe it'll give them something to build on for next time.

The offense didn't handle Ubaldo Jimenez at all, though admittedly that's been par for the course this season, for every opponent. In six innings, they managed just two hits and no runs: He extended his scoreless streak to 22.1 innings, the longest in franchise history by a starter, and reduced his season ERA to 0.79. The nearest that the Diamondbacks came to breaking through against Jimenez was in the third, when Chris Snyder had a one-out double, and we had runners on the corners with two out, but Stephen Drew flew out to right-center to end the opportunity.

We had one other at-bat with a runner in scoring position until the eighth, when Justin Upton broke up the shutout, to the jeers of the Coors crowd. Somehow, the Rockies managed to hold on: it's the first time this year Arizona has lost a game by more than five, and the eleven-run margin of defeat was the worst for Arizona since we got clubbed 15-1 by the A's in June 2008. Still, the good news - apart from me missing the whole thing - is that it only counts as one in the standings (Pythagoras? Get outta here!), and so we'll come back tomorrow against a starter pitching on three days' rest with a chance to win the series. 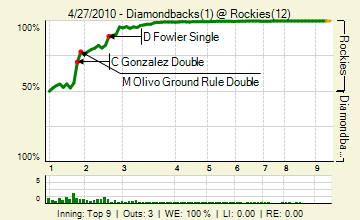 [Click to enlarge in new window at Fangraphs.com]
Master of his domain: Chris Snyder, +1.0%
God-emperor of suck: Take a wild stab in the dark, -37.2%

Back tomorrow, after some wound-licking, and we send our team-leader in ERA to the mound. That's Kris Benson, in case you had forgotten. It's an afternoon game in Colorado, so bear that in mind when scheduling activities.

[Answer to trivia question: Eddie Oropesa was the first Diamondbacks pitcher to allow ten earned runs in an outing... But most remarkably, he did it as a relief pitcher: only one bullpen arm has matched that feat since, Jimmy Gobble for the Royals in 2008. That was also the infamous game which saw Mark Grace pitch]