Diamondbacks 5, Rockies 3: If I had a Hammel, I'd hammer in the early innings...

Share All sharing options for: Diamondbacks 5, Rockies 3: If I had a Hammel, I'd hammer in the early innings...

Arizona leapt out in front early, using a three-run homer by Adam LaRoche in the first to take the lead. From there, Dan Haren settled down nicely after a lead-off homer to Carlos Gonzalez, one of the players for whom he was traded by Oakland, and allowed only one more run through the end of the eighth inning. The ninth inning proved to be as... "interesting," shall we say, as ever, with Chad Qualls allowing a walk, two hits and putting the tying run on base, but struck out the potential winning-run in Jason "I'm sorry, but I'm not telling you what for" Giambi.

Details after the jump, though it's hard to type when I'm still breathing into a paper-bag.

Denver played like Denver early on, with the Diamondbacks doing all their damage in the first couple of innings, and with two men out. In the first, Justin Upton walked, Mark Reynolds singled and Adam LaRoche then crushed a pitch deep into the bullpen area at Coors to give Arizona an early 3-0 lead. The Rockies wasted no time replying, as noted above, but the D-backs returned the run, with interest, in the second inning. Chris Snyder doubled to lead things off, came home on a sacrifice fly by Kelly Johnson, and a Stephen Drew double was followed by an Upton single, to make the score 5-1 in the middle of the second inning.

And that was it. For twelve consecutive scoreless half-innings. The Rockies starter was gone after three frames, apparently the victim of a groin injury. While this meant we got into the Colorado bullpen early, that might not have been such a good idea, given the Rockies relievers came into this game with a league-best 2.29 ERA. They showed why this number is not an illusion. In six innings of work, the Diamondbacks managed only one hit - and that by Haren - while striking out seven times, and not getting a runner past first-base.

Fortunately, two things were in Arizona's favor. Scoring five runs in the first two innings, and the return of Good Dan Haren. Some pitchers have problems in Coors, but not him - tonight was his sixth start in Denver, and he is now 4-1 with a 2.63 ERA. Oh, and the ten strikeouts he managed tonight gives him a sick K:BB ratio in the park of 43:5. After allowing a single with one out in the second, he pitched six no-hit frames, until he tired in the eighth, being sent out there (for understandable reasons), despite being over a hundred pitches.

Colorado pulled one run back there, but Haren ended his night with a nice double-play ball off his 115th pitch of the night. His final line: five hits, two walks and two earned runs. Between him and the Rockies' pen, JoeStock informs us that "The game had 29 batters go by without a hit during the middle of the game." And then, of course, there was the little matter of the ninth inning to get through. I was surprised to see Qualls out there, given he has already appeared in more games than any other Arizona reliever: this was his 11th appearance, a number surpassed in the NL by only two pitchers, neither of them closers.

And... Well, to cut a long story short, it wasn't pretty, but it got there. Qualls needed to throw more pitches - 32 - than he had ever thrown in an Arizona uniform [you have to go back to September 14, 2007 for such an outing, when he was with the Astros], before he finished striking out the side. That was around a walk, and two singles, which brought in a run, extending the overall problems for Arizona in the ninth, and keeping Qualls' ERA at an unhealthy 9.00. It's only the tenth time in NL history, a pitcher has got a save, while throwing 32 or more pitches and getting all his outs by the K. 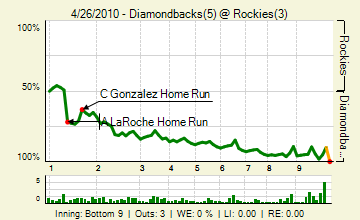 A good start to the road trip, and one that brings Arizona to within one game of .500. The only thing that stands between them and that mark is some guy called Baldrick James or something, who pitches for the Rockies tomorrow. Surely that will pose no problems...