Diamondbacks 8, Phillies 6: Reynolds Wraps It Up

Share All sharing options for: Diamondbacks 8, Phillies 6: Reynolds Wraps It Up

A nice showing at the plate by the Diamondbacks made up for some sketchy starting pitching, and the bullpen gave us three scoreless innings, as they put together enough runs to win the series from the defending NL Champions and split the home stand.  All in all, not a bad way to spend a spring afternoon.

Neither starter was particularly impressive on the mound this afternoon, as evidenced in the fact that both put up an ERA of 9.00 on the day.  Rodrigo Lopez's problems started early- well, immediately, I suppose, as he started off the game giving up a single and a home run.  After that, however, the Green Lantern did settle down for a while- he allowed one more single in the first, but he only allowed one more base runner until the fifth inning.  But in the fifth, he ran into trouble, pretty much of his own making.  The Phillies started off the inning with a bunt, but Lopez threw the ball away, and the runner eventually came around to score to put the Phillies up 3-0.

Meanwhile, the Diamondbacks hadn't had too much luck at the plate.  They threatened in the second, but couldn't manage anything else, and they looked to be having another quiet day on offense up until then.  But then the bottom of the fifth started.

There was some concern around here- Upton's at-bat included him fouling a pitch off his shin, and he was pulled from the game after the inning.  Early reports are that he's got a contusion on his shin, and he is day-to-day at the moment.  [Thanks to rockkstarr12 for the update.]  He was replaced in right field by Cole Gillespie.

The Phillies fought back to regain the lead in the sixth, with Werth hit a sacrifice fly for a run and then a two-run double by Carlos Ruiz giving them a 6-5 lead.  That was the end of Lopez's day, and after an attempt to score in the bottom of the sixth failed, he looked to be in line for the loss.

Or was he?  After a scoreless inning from Esmerling Vasquez, the Diamondbacks again put the tying run on third, but couldn't close the deal.  Leo Rosales gave us a tense eighth inning that was, ultimately, harmless, and we set forth to try again in the eighth inning.

A single to Drew led it off.  Cole Gillespie stepped up and smacked a double, only to see Drew gunned down at the plate on a good throw.  However, not all was lost, as Mark Reynolds came up next and hit a double deep to right field allowing Gillespie to tie it up.  An intentional walk to Adam LaRoche backfired for the Phillies, as Chris Young stepped up to bring in Reynolds and LaRoche.

There we found outselves, two run lead, going into the ninth inning- and Chad Qualls comes in to close.  As we all reached for our antacids, Qualls handled it well.  Ground ball, strike out, strike out, and the Diamondbacks had won the game and the series.  Not without some worry and concern, of course, but a win is a win.

So, a good game from our offense- fifteen hits and six walks, with every starter except Upton with a hit.  The bullpen gave us three scoreless innings, and that's just what we needed.  Leo Rosales picked up the win for his nerve-wracking eighth, and Chad Qualls got his fourth save on the season.  It was noted that Qualls seemed to be keeping his pitches down in the zone better, so maybe we've got room to be optimistic about him. 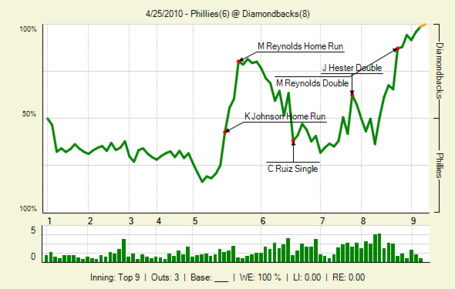 So, a good end to a somewhat disappointing home stand, and we're on the road promptly.  An eleven game road trip looms, and we'll start that off tomorrow against the Rockies.