In the Diamondbacks' seven wins this season, they've scored an average of 8.5 runs/game. In their nine losses, they've allowed an average of 6.2 runs/game. Do you think at least one of these days we could prevail in a low-scoring game? Maybe eventually, but not tonight. Following last night's home run barrage, could the hitters continue the trend tonight? The magic eight ball says no.

Tonight followed the old adage of "Second verse, same as the first." Once again a Diamondbacks starting pitcher threw a spectacular game; once again he leaves with the game tied; and once again, his bullpen gives up a loss.

Tonight was another one of those beautiful baseball games started by the youngest member of the rotation, Ian Kennedy. He and catcher Chris Snyder had a fast pace from the beginning, throwing strikes and throwing them well. He had the Philadelphia hitters off balance, 22 of his 29 batters were first pitch strikes, and he induced 10 ground ball outs. The first four batters in the Phillies lineup - Victorino, Polanco, Utley, and Howard - went a combined 0 for 16 with three strikeouts. It was the #5 hitter, Jayson Werth, that proved particularly troublesome tonight. Two of the four hits Kennedy allowed were solo home runs. Werth's came in the 2nd inning, and Raul Ibanez hit his in the 7th to break up Kennedy's streak of 15 batters sat down in a row.

While Kennedy was keeping Philadelphia's batters in their dugout, Arizona wasn't having much more luck against former (long-ago) Diamondback Nelson Figueroa. Hitters had scattered three hits and two walks in the first 4 innings with nothing to show for it, but then the 5th inning came along. Chris Snyder singled to lead it off, and Kennedy executed his first career sacrifice bunt to perfection to move Snyder to second base. Mark Grace said in the booth, "Alright, let's tie it up here," but Kelly Johnson had something better in mind - taking the lead. He smashed a ball to deep center field that Shane Victorino just turned around and watched, and the Diamondbacks had given Kennedy a 2-1 lead. Kelly Johnson, in case anyone hasn't noticed, is having a monster start to the season - his 6 home runs are tied for 2nd in NL, and his .800 slugging percentage and 1.231 OPS both lead the NL.

Ian Kennedy truly looked solid out there on the mound. The bases were clear most of the night, and really his only two mistakes were both hit out of the park. He often shook off Snyder to pick what he felt confident enough to throw in the situation, and the result was a gem of a start. He had 48 pitches through the first 3 innings; barely over 100 through 7. (His last 3 starts saw an average of 99 pitches over fewer than 5 innings.) In fact, Kennedy hit for himself in the bottom of the 7th inning and pitched 8 innings for the first time in his big league career. That 8th inning started off a little nerve-wracking with a leadoff double by Carlos Ruiz, but Kennedy settled down and retired the next three Phillies to leave Ruiz standing at second.

Kennedy left the game with a 2-2 tie and his team would not be able to get him the win, but would they get a win? How many of you said, "Oh gee, 8 innings from the starting pitcher would be great, our bullpen can probably pull it together enough for one inning." If you thought that, you would be WRONG. The lack of a left-handed specialist in the bullpen hurt the Diamondbacks this evening - Juan Gutierrez came in for the 9th inning, and after two outs, gave up a solo home run to That Guy From Planet of the Apes, Jayson Werth. One more run would be all the Phillies needed; a one-run deficit was too much for Arizona to overcome. Against Ryan Madson (he of the 7.71 ERA) in the bottom of the 9th, Gerardo Parra singled up the middle, but Snyder and pinch hitter Tony Abreu struck out to end the ballgame. 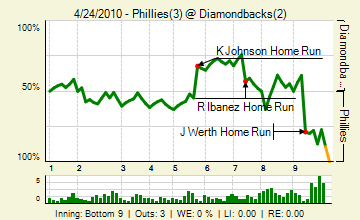 The horrible bullpen numbers that are sure to be floating around the articles tomorrow aren't very pretty. Mentioned during the broadcast: in the past 13 2/3 innings pitched by the Diamondbacks bullpen, they've allowed 23 hits, 20 runs, and 8 home runs. Including tonight, the Diamondbacks have been outscored 22-7 in the 8th and 9th innings this season; 19 of those runs have come in the 9th inning for an inning ERA of 13.50. I don't know if Arizona still ranks below Kansas City Royals and Washington Nationals in bullpen ERA, but tonight is just one more game (for a total of 7, I believe) that the bullpen lost for the team. Everyone here wants change, and we can only dream that after this week's performances, change has to be coming.

It was a pretty quiet Gameday Thread; what, do people actually go OUT on Saturday nights? Actually, I would've gone out too, only my stomach decided that I should stay home, so I let Jim go out for dinner and beer while I took over this recap. We haven't even reached 700 comments yet, soco led the way with 128, and I barely beat out Joe for second place 81/77. All present were: soco, NASCARbernet, kishi, Jim McLennan, Rockkstarr12, 4 Corners Fan, snakecharmer, Wailord, JoeStock, hotclaws, pygalgia, blank_38, DbacksSkins, katers, IHateSouthBend, luckycc, and DBacksUA.

Tomorrow is a day game, first pitch at 1:10PM local time. Rodrigo Lopez faces Kyle Kendrick, and kishi is on the recap. I don't want to say that I think we need a complete game from Lopez to even have a shot at winning, but it's hard not to think that. Let's take the series tomorrow and worry about the upcoming road trip after that.