Arizona tied a Chase Field record with five home-runs, AJ Hinch was ejected for the first time this season, and the bullpen held on for the victory, despite allowing another ninth-inning run and making things rather more nerve-wracking than they should have been. Still, the win's the thing: especially since we beat a left-handed starter for the first time this season, and I also get to write a recap that uses the words "Diamondbacks" and "victory" next to each other, something I haven't done for a regular-season game in more than six months.

Details of this...oh, let me savor it...Diamondbacks victory after the jump. Boy, I enjoyed that.

It's amazing how quickly this game turned around in the space of two at-bats. The middle of the fourth saw a distinctly unhappy crowd at Chase Field: the line in the score-book, "J Werth safe at home on error by center fielder C Young, J Werth scored," will tend to do that to the viewer, even though on the replay, it was clearly a 100% BS call - Chris Young had caught the ball, and drooped it afterward, while transferring it to his throwing-hand. Scott really should have asked the opinion of the other umpires - is it just me, or has the umpiring this season been particularly poor so far?

AJ Hinch came out and had a really lengthy discussion with second-base umpire Dale Scott about the blown call; eventually getting himself tossed. However, Chris Young didn't exactly help his case by drifting off, apparently bored with the whole scenario, to center-field while Hinch was still debating the merits of the case with Scott. It was probably the most lengthy discussion I've ever seen, though the amusement factor resulting from it was rather limited by it taking place approximately 80 yards away in center-field. Fortunately, it didn't prove a game-decider, though seemed at the time it might.

That run gave the Phillies a 2-0 lead, Cole Hamels having scored the other one in the third, doubling and then coming home on a triple. The D-backs had handled him on the mound no better than at the plate to that point: he had retired nine of the ten Arizona batters faced, with a a Young seeing-eye single into the hole being the only exception. However, second time through, we did a little bit better. As in, we went 5-for-9 with three homers, all of those hits coming in a five-run fourth.

With one out, Justin Upton singled and Mark Reynolds crushed his sixth home-run of the season, heading towards Fatburger territory, if perhaps a little short on length. Adam LaRoche then delivered his first long-ball in an Arizona uniform, in his 45th at-bat, and after Young singled, Chris Snyder completed a happy inning by going deep to left for another two-run shot. The Phillies fans - who were there in number (and I can't blame 'em: where would you rather be in April, here or Philadelphia?) - were a good deal quieter after that, which made for a much more pleasant gameday experience. We, meanwhile, started chanting "HAAAA-mels... HAAAA-mels..." after each shot. 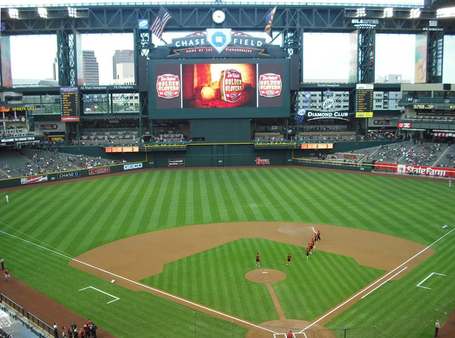 Kelly Johnson, miffed at not getting his chance in the fourth, joined in when leading off the fifth, and gave himself a multi-homer game when in the same position in the seventh, greeting the Phillies bullpen with what is already his fifth home-run. I mentioned to soco that I like it when our second-baseman is slugging .700: that was selling Kelly short, as the actual figure is .769. His OPS of 1.195 is the best by any qualifying second-baseman in all of baseball: thus far, he has been a stellar pick-up and an amazing bargain; very nice to realize we have him under control for next season too.

Meanwhile, Kris Benson was proving an equally-reliable nugget from Josh Byrnes' dumpster-diving. He matched his first outing with another quality start, comprising six innings of work and two earned runs, in almost the same number of pitches (97, three less). Benson allowed two more hits, but countered that by not walking a batter, of which I approve. He went out there in the seventh, but back-to-back hits got him lifted, to a warm ovation.from the crowd. Leo Rosales got two ground-balls and struck out the ever-dangerous Utley to end the threat - one inherited runners scored, but Johnson's second home-run in the bottom of the seventh restored the margin to four runs.

Juan Gutierrez pitched a perfect eighth - outside of one bad outing, he has been solid, and would still seem to be the most-likely candidate to replace Chad Qualls if he falters. But what would this team be without drama? Four-run lead in the top of the ninth was, according to fangraphs, a 98.3% and that got as high as 99.5% after Aaron Heilman got two outs, after a lead-off walk. I can certainly tell you that it did not feel like the Phillies were 200-1 longshots at that point, and the RBI single that followed seemed inevitable. With the tying run on-deck, in the shape of Utley, Qualls was summoned.

We had shifted our location to the concourse for the ninth - we had no interest in being trapped in the garage for the fireworks, but this worked out quite well, as it allowed for the necessary pacing about with each pitch. What? We still have a 98.7% Win Probability? Fangraphs clearly had not taken into account that this was the Diamondbacks bullpen we were talking about here. However, Qualls did what he does best, and got a groundball to LaRoche, and after a very quick jig of delight, we whizzed out of the park. 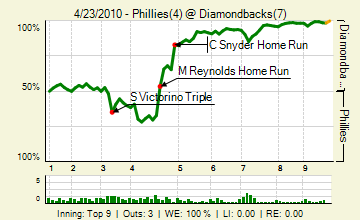 Not a bad evening for the offense, with the exception of Gillespie, who went 0-for-4 with three strikeouts, and the only time he put the ball in play, hit into a twin-killing. Young had three hits, Johnson and Upton a pair each, and Snyder reached three times, with two walks in addition to his home-run. The recap is a bit late, since I had to fiddle around with the internet when I got here, so I haven't had a chance to read the GDT, but kudos for a civilized political discussion (something impossible, and hence banned, on many SB Nation sites). Though as a legal immigrant, my opinions on that topic are probably somewhat different from many posters [I don't view it as any different from being carded when you buy alcohol - as happened to me tonight at Chase, even as I pointed out to the server that SnakePit Jr is old enough to buy his own!]

Anyhoo... We cruised past 1,110 comments, television or no television. with 'Skins leading the charge on 215, and Wailord and justin1985 cracking three digits too. Also present, in varying numbers: IHateSouthBend, NASCARbernet, unnamedDBacksfan, katers, snakecharmer, emilylovesthedbacks, JoeStock, pygalgia, 4 Corners Fan, Muu, Rockkstarr12, hotclaws, BattleMoses, soco, skoormit, luckycc, Dallas D'Back Fan, SeanMillerSavior, piratedan7, brian custer and rdf8585 (welcome!), so thanks to all for their contribution. We face a Phillies spot starter tomorrow, so hopefully, we can smack him about as much as we did one of their frontline guys.