Well. That was...interesting. Arizona held their own, after a very shaky first inning from Edwin Jackson. They battled against Chris Carpenter, almost got into a brawl with the Cardinals, came back, and looked like they might have a chance, tying things up at four at the end of the eighth inning, with Carpenter gone.

And then the bullpen happened, in the shape of Chad Qualls and Bob Howry. They combined to give up more runs before getting the second out in the ninth, than Jackson gave up in the first eight. That would be "five", if you have no interest in doing the math. Incendiary details after the jump.

The game did not start well for Edwin Jackson. The Cardinals were aggressive early, and a lead-off double was followed by a hit batter. A sacrifice fly moved the runner up, and a shallow fly was enough to score the first run when Justin Upton's fired the Jupzooka, but rolled a fumble and sent the throw sailing clear to the backstop. Grumblings from Mark Grace followed, but were extinguished when a home-run was dispatched out of the park. 3-0 Cardinals, and as noted, we were facing one of the most dominant pitchers of the past five years. And he struck out the D-backs in the first, around a walk.

But the dynamics got interesting in the second, after Jackson hit Chris Carpenter on the forearm. It didn't look deliberate, but the two exchanged words as a clearly-miffed Carpenter took his base. When the next batter grounded into a double-play, Carpenter tried to take out Kelly Johnson at second-base, going in standing up, and more argy-bargy ensued, with the benches clearing as a result. Order as restored, but it was clear the Carpenter was still upset by the whole thing - no retaliation followed...tonight. But if I know anything about Tony LaRussa, there will be something in a later series.

Jackson settled down a lot after that; he seemed to get stronger as the evening went on, hitting 97 mph later on, and finished by retiring the last eight batters faced, to end the longest start by a Diamondbacks pitcher this year. He continued to generate ground-balls, including a couple of double-plays, and finished with twice as many outs on the ground as in the air. He allowed seven hits, and the only damage after the first was when a one-out triple by the Cardinals in the sixth inning, came home on a wild pitch. Jackson threw 106 pitches, being efficient after the first, and it certainly helped that he allowed zero walks.

Meanwhile, the offense was slowly clawing their way back into the game, though not without struggles. Arizona struck out a season-high 14 times - Justin Upton went 0-for-4 with four strikeouts, and I think is now tied with Jason Bay for the NL lead, on 22 K's [Mark Reynolds, who didn't play tonight because of his niggling leg problem, is some way back on 17] We got two runs in the third, on back-to-back doubles by Tony Abreu and Stephen Drew in the third, and then two more in the eighth, on a double by Johnson and a wild-pitch. The former drove in Cole Gillespie, who made his major-league debut and doubled down into the left-field corner. Gerardo Parra was unimpressed.

So, game tied, both starters gone, and I kinda fancied our chances as the Cardinals bullpen had been quite heavily taxed on Wednesday night, after their starter only went three innings. I was very surprised to see AJ Hinch turn to Chad Qualls for a third consecutive day. I know he'd been good yesterday, but he has only done it twice since coming to Arizona: one of those times, the third outing was for a single batter and the other was compelled last year, in that Florida series where we double-headered and played 22 innings in one day. Today, we did have other options, with Gutierrez the only bulpen arm used yesterday. Why they weren't used, I've no idea.

But before I could look anything up, Qualls rendered it moot, hanging a pitch - I'm going to talk about this in more detail tomorrow - which was promptly sent screaming out of the park to about the picnic areain deep right-center. From there, the inning went single, sacrifice, RBI double, enter Bob Howry, single, three-run homer. 9-4 Cardinals, and in the space of one out, our Win Probability had gone from 50% to 0.8%. The latest Walmart-sized slaughterhouse left Qualls' ERA at 10.80, Howry's at 12.60, and overall, the Diamondbacks' pen has now allowed 35 earned runs in 43.2 innings, a collective ERA of 7.21 and possessing a record of 2-5. 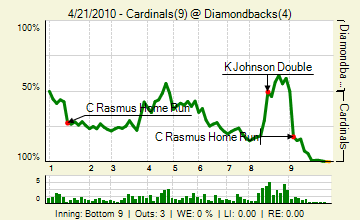 No doubt where the blame for this one goes. A certain "someone" "accidentally" - or so they claim - posted an eel picture in the thread. They will not be troubling us any longer. Otherwise, it was fun, with a number of (mostly) friendly visiting Cardinals fans boosting the post count to just shy of 1,500, with what appears to be a record number of posters, 41. 'Skins, skoormit and 'charmer cracked three figures: also present, Dallas D'Back Fan, Wailord, kishi, [he who shan't be named], Clefo, spants, emilylovesthedbacks, luckycc, hotclaws, IHateSouthBend, katers, PhoenixFly, 4 Corners Fan, unnamedDBacksfan, TBender, RiverRat, pygalgia, NASCARbernet, Zephon, G.O.B., ZonaBacks10, Muu, Fiona, ol Pete, Voxx, singaporedbacksfan, ClemsonGirl, Rockkstarr12, soco, SeanMillerSavior, BuzzKillington, stlcardinalsfang, muidomi84, Sprankton, Turambar, piratedan7 and dima1109. Thanks to them all for their participation.

So, my recap record goes to 0-4, and we have an off-day tomorrow, with the Phillies coming to town for a weekend series. Should be kind of hitterish, since Philadelphia and Arizona are currently #2 and #3 in the National League for runs scored. Just as long as Messrs, Lopez, Benson and Kennedy can all pitch complete games, we should be ok. I'll be back in the morning with the SnakeBytes, and later in the day, a look at the struggles of Qualls.