Diamondbacks 9, Cardinals 7 or: How I Learned to Stop Worrying and Love the Diamondbacks

Share All sharing options for: Diamondbacks 9, Cardinals 7 or: How I Learned to Stop Worrying and Love the Diamondbacks

If you wouldn't believe me if I told you that Dan Haren was perfect at the plate going 4-4 with a RBI, then you would probably have an even more difficult time believing me if I told you that the bullpen recorded a hold, a save, and pitched three hit-less innings. In a game filled with four home runs, a triple, lots of hits, a balk, and even a runner being picked off, it was one that you definitely did not want to miss. Yep. You should regret missing this if you did. Mmmhhmmm.

More inside jokes and baseball stuff after the buh-buh-buh-bounce.

Whatever confidence we had going into this game was quickly obliterated within the first few minutes. As Skip Schumacker reached on a wild pitch after striking out, a lot of sighs were heard at Chase Field. The Cardinals took advantage of this leadoff blunder and jumped on Haren. After a homerun by Ryan Ludwick, St. Louis was looking back at us with a 2-0 lead. Hidden beneath all of the mishaps, however, was the fact that Haren struck out the side. Perhaps a sign that he had settled in and would dominate for the rest of the game? Hint: It's not.

The Diamondbacks rallied back in the bottom of the first, going toe-to-toe with Kyle Lohse and the Cardinals. With some quality at-bats from the heart of our lineup, Justin Upton and Adam LaRoche drove in a pair of runs to tie things up. Although a double play from Mark Reynolds put a halt to the potential damage, the tone of the game was set. This team won't go down easy.

The top of the second inning clearly proved that Dan Haren was "in it to win it." He continued to mow down the Cardinals lineup and struck out the side once again. He even knocked his first hit of the game. Unfortunately, Dan would run into another miscue in the third inning, allowing back-to-back homeruns to Ludwick and Albert Pujols. It was clear that he did not have his best stuff, something we really haven't been treated to so far this season. I'm not sure what Haren's career high is for homeruns allowed, but I'd make a bet that this ranks among his highest.

The Diamondbacks, again, answered back with some timely hitting and some nice 2-out RBIs. I can't provide any firm statistics, but so far this season it appears that the team is doing much better in each of those departments. While the record doesn't reflect that just yet, it definitely looks like they've improved. Gerardo Parra drove in the walked pair of Reynolds and Young to tie the game at 4-4. Chris Snyder then walked and Dan Haren knocked his second hit of the game to give the D-Backs their first lead. Toe-to-toe. Arizona took a 4-5 lead heading into the fourth inning. Yeah, four.

The fourth inning was littered with even more runs. Dan Haren and Kyle Lohse continued to get hammered. St. Louis sent eight batters to the box and finished with three runs on five hits including a triple. The Diamondbacks countered with six batters, three runs, and two hits. It's important to take notice of this point in the game, though. Starting with the final out in the fourth inning, the Diamondbacks retired the next 16 Cardinals batters. If that isn't "Say what?" worthy than I don't know what is. Oh yeah, Dan Haren also notched his third hit of the game in the fifth. 'Nuff said.

Chris Snyder drove in the final run of the game in the sixth inning on a shallow single. As soon we scored the ninth run, this one was over because the Diamondbacks have now won 69 straight games when scoring nine runs or more. The last time we dropped such a game was May 17, 2006 when we lost 14-10 to the Padres. What better way to top it off though without Haren's fourth hit of the game. Only three other pitchers since 2000 have had four hits in four PAs: Micah Owings for AZ vs. Pit (September 27, 2007); Bobby Livingston for Atl vs. Cin (July 16, 2007); and Livan Hernandez for Sfg vs. Chc (August 11, 2001). Definitely something you would regret missing. Yep. Mmmhhmm.

Haren also became only the third Diamondbacks pitcher to allow seven earned runs and still get the win. The last one was Rick Helling, eight years ago to the day, vs. Colorado (5 IP, 7 ER, we won 9-8). Seems to be an April thing - the other was Curt Schilling on April 25, 2001 vs. Florida (7 IP, 7ER, we won 10-8). Additionally, the Diamondbacks left 13 men on base in only eight innings - the most in such a contest since August 11, 2002, when they beat the Marlins 9-2.

Juan Gutierrez came in and mopped the floor in the 7th and 8th innings without allowing a batter to reach. Chad Qualls then wrapped up a 1-2-3 ninth inning to complete his second save of the season and ensured an amazing D-Backs victory. 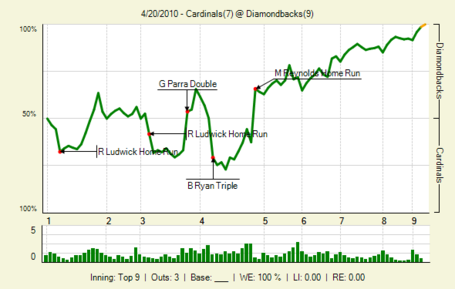 Another wild and crazy gameday thread. I haven't thumbed through it just yet, but I'm sure it has all of the typical ramblings about eels, matinees, oranges, or whatever it is that you crazy people talk about these days. BattleMoses took the top spot with 141 comments. The percentage of those comments related to the game is yet to be determined. snakecharmer, DbacksSkins, IHateSouthBend, and hotclaws all topped 100 comments in that respective order. The rest of the group included Voxx, jd is legend, muidomi84, Zephon, Amit, brian custer, dima1109, Rockkstarr12, kishi, Muu, luckycc, piratedan7, DKuon, Jim McLennan, singaporedbacksfan, katers, Wailord, unnamedDBacksfan, Craig from Az, Clefo, NASCARbernet, RiverRat, spants, mrssoco, Dallas D'Back Fan, IndyDBack, emilylovesthedbacks, ol Pete, 4 Corners Fan, and of course soco.

Such an awesome game surely deserves such an awesomely late and procrastinated recap. Lots of thanks to Jim for the stats, trivia, and other bits that were included. Please direct all of your recap related questions and complaints to him.

We look to try and extend the win(ning) streak as Arizona rolls into a beautiful day tomorrow. Seriously, a high of 63 degrees? That's the baseball gods telling you to go see the game. We'll be taking aim at Chris Carpenter (2-0, 3.50) as he squares off against Edwin Jackson (1-1, 3.50). Carpenter has been a bit of a thorn in the D-Backs hitters sides lately, going 3-0 over his past five games against Arizona while posting a 3.13 ERA. St. Louis tinkered with their rotation to get Carpenter in on this game so we'll need to make them pay for it.