Share All sharing options for: Diamondbacks 2, Cardinals 4: An Eye-Witness Report 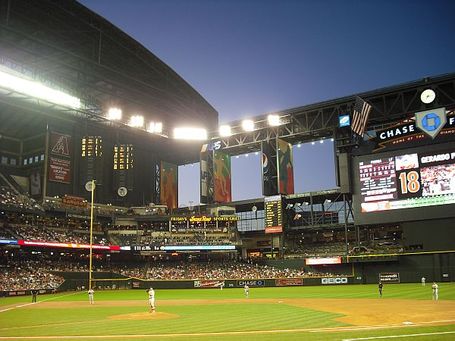 As wailord has already done a sterling job of recapping the game, I don't see much point rehashing the details of the autopsy report. Oh, look: our starting pitching was solid; the bullpen sucked; we wasted opportunities to score more when we had the lead. Or "business as usual" over the past few games. Instead, here are a few pics around Chase last night; I'm contractually not allowed to show any actual game action, but trust me, that's for the best. 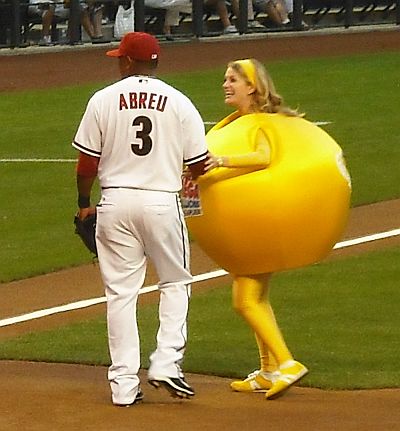 "This is my rookie hazing, right?"

I was sorely tempted to write a caption involving Russ Ortiz's wife, but that'd be too low, even for me. Actually, last night's game was brought to you by the Arizona Lottery, so it was the Mega Millions lottery ball (or some such similar game) that took the mound to throw out the first pitch. Though "throw out" was a severe exaggeration: for obvious reasons, it's difficult to get any velocity when you are inside a giant round costume, and the ball barely rolled halfway to the plate. As the above picture shows, poor Tony Abreu seemed deeply embarrassed to be catching the pitch. 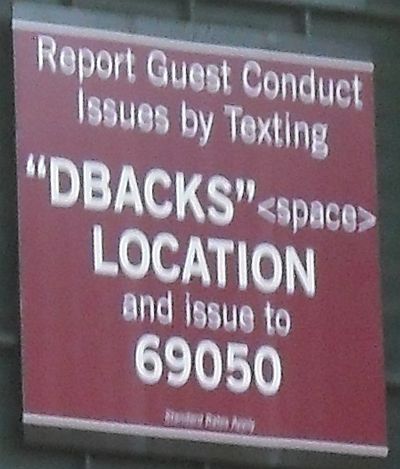 File for future reference the next time the Cardinals are in town.

I'd previously had a good opinion of St. Louis fans, but if the Neanderthal examples infecting Chase last night were anything to go by, we may have discovered a species even more insufferable than the local Cubs supporters. It was like being stuck in the middle of a herd of braying donkeys as they shrieked the name of every Cardinals batter to come to the plate. Worse still: yelling "Swing!" as a pitch goes towards the plate is not funny, not clever, and does not require you to stand, whoop and high-five your neighbor if the batter does take a shot. I'm sure these are not the majority, but we'll be crossing the Cardinals off the calendar for future Chase visits. 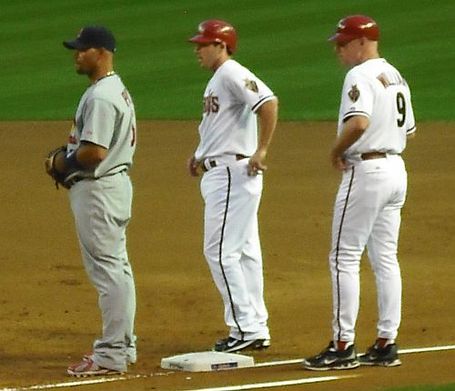 "Ok, you knock Albert down, and I'll slit his hamstrings..."

In terms of the game, although we jumped out ahead early, it didn't feel at any point like a comfortable lead, with the Cardinals stranding base-runners at will. It was almost a matter of time before they scored, and their doing so just after Rodrigo Lopez had struck Fat Albert out on three pitches, sucked the life from the stadium. The crowd got back into it in the eighth, but Stephen Drew's inning-ending double-play killed the momentum completely. I have to say though, seems like Pujols got some pretty favorable calls, especially on checked swings which we had a good angle on from our seats behind the Cardinals dugout. 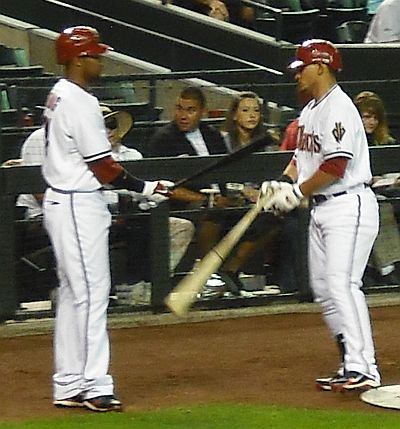 Again, however, it was the bullpen - with a little help from some bad defense - which proved decisive. I didn't see any replays, but at the time it felt like LaRoche was trying to throw home on the groundball, before actually having a hold of the ball. LaRoche has now matched last year's error total in just nine games with the Diamondbacks. And still hasn't hit a home-run... Johnson's throwing away of the the ball into the dugout was just embarrassing. The Cardinals fans around us loved it. Qualls continued to look very wobbly in the ninth: I'll be writing something up on his early troubles in the next couple of days.

All told, while I enjoyed the seats, the company, the garlic fries and the Coldstone ice-cream, it was an immensely frustrating experience in general. I'm hoping for better things all round. when I return to Chase on Friday, to see us take on the Phillies.