Suspect wanted for the kidnapping and subsequent murder of Ian Kennedy’s Win against the San Diego Padres, April 18th, 2010. Win was declared dead on arrival by Arizonan coroners. Time of death is approximated at 3:40pm, MST.

Victim was last seen less than an hour before time of death at Petco Park in San Diego, California. Kennedy’s Win was last seen leaving with a suspect described as 6’ 3” and 210 pounds, brown hair, late 20’s Hispanic male. Suspect was wearing a red shirt and white pants, and had a red hat perched upon his tanned scalp.

Last known activities of the victim include pitching 5 shut-out innings, sustained by a tepid Diamondbacks offense. Initial investigation indicates that the victim had some fun early in the afternoon the shoulders of a Mark Reynolds RBI single. Tony Abreu had being standing on second after a single and a steal.

That would be the extent of offensive action for either side until the top of the 6th. The Diamondbacks and the Padres traded with scoreless frames with only the D’backs getting more than one hit in an inning. Reynolds added to his one-man onslaught by slugging a solo home run to lead off the 6th, bringing the Diamondbacks to 2-0. Things still looked fine for Kennedy’s Win, even with a shaky effort by Rosales that might have ended in an earlier demise for the victim. He quickly put two Padres on by giving up a single to Adrian Gonzalez and a walk to Chase Headley. Dr. Reynolds must have been looking for a heartbeat, though, as he bailed out Rosales with a fantastic third to first double play.

In the 7th inning is when things turned for the worse for the victim. Aaron Heilman was tasked with protecting the lead and promptly gave up a solo home run to former Diamondback Scott Hairston. He seemed to have settled down for a bit, getting Nick Hundley and David Eckstein out after a little bit of work. Trouble’s a tough dame, though, and she was lurking around the corner to seduce Heilman with her womanly charms. Evereth Cabrera singled and then stole second to set up Jerry Hairston, who messed around with a few pitches before slamming a double to deep left, scoring Cabrera.

The victim’s vitals at this point were near flatline, and needed help fast. Unfortunately for Kennedy’s Win, Juan Gutierrez stepped up to pitch, manical grin smeared across his face. He walked Gonzalez to get to Chase Headley, but that poison was just as deadly to victim. Headley ran up the count to 2-2 before lashing a ball to deep center over Chris Young’s head. Hairston, who had stolen third, easily scored, and Gonzalez came hustling around from first to bring the score to 4-2. Young tried to get back to the plate in time, but Abreu spiked the ball, allowing Headley to score an inside-the-park home run, which has been theorized as the cause of death for Kennedy’s Win.  Additional tests will have to wait for an official autopsy.

Should you have any details for this gruesome crime, please call the Soco Crime Investigator’s Tip Line: 1-555-555-SOCO.

Funeral arrangements have been made with the family. Rusty Ryal and Stephen Drew have generously donated an additional run in the 9th inning on a Ryal single and Drew double combination, making the end score 5-3 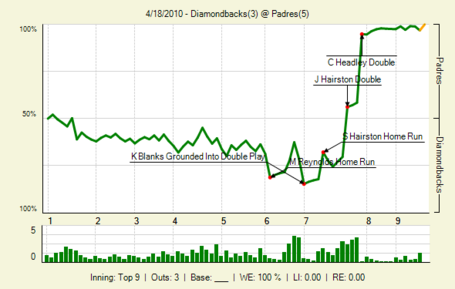 Lively GDT up to a certain point, namely right before first pitch.  We racked up over 400 comments before first pitch, largely on the shoulders of the Coyotes continued playoff adventure.  We ultimately ended with exactly 1000 as the game ended, though the discussion apparently still rages on.  Only one poster braved the triple digits, and that would be me with 253.  22 other friends joined me to talk about baseball, food, eels, education, and 'Arry 'Otter: 4 Corners Fan, Rockkstarr12, snakecharmer, DbacksSkins, kishi, Jim McLennan, BattleMoses, Wailord, emilylovesthedbacks, unnamedDBacksfan, Zephon, mrssoco, katers, NASCARbernet, dima1109, TheDBackFan, hotclaws, brian custer, SongBird, IHateSouthBend, mfan2010, DBacksUA

Quick turnaround for the Diamondbacks, who return to the grind Monday with a matchup against the St. Louis Pujols.  It doesn't get any easier from there, with the two-straight NL Champion Illadelphia Phillies coming to town for the weekend series.  No word yet on Conor Jackson's apparent leg tweak, so if anyone has some news, let us know in the comments.