Diamondbacks 0, Padres 5: In Which The Offense Evaporated

Share All sharing options for: Diamondbacks 0, Padres 5: In Which The Offense Evaporated

My concern going into this game was starting pitcher Kris Benson. He had hardly pitched in the majors since 2006, and the results when he did were unimpressive - an ERA of 8.46. However, this evening, Benson was certainly not the problem, giving Arizona a quality start by allowing only two runs in six innings of work. We would have been delighted to accept that from him before the game began. Our #5 starter? Yes, please, and twice on Sunday.

However, the hitters just didn't (hit, that is), and the bullpen coughed up some more walks, hits and runs. So, no real change there. There'll be stuff after the jump. But - and you can trust me completely on this - there will be no eels.

Probably no better place for Benson to be pitching than Petco, but the way this started did not exactly bode well. A single back up the middle almost decapitated our starter, and he then hit the poor, inoffensive David Eckstein, and walked Adrian Gonzalez. If you're keeping score at home, that's the based loaded with no-one out, and every Diamondback fan in the nation wondering what Kevin Mulvey was doing tonight, and why he was doing it somewhere other than the mound at Petco.

However, a double-play and a pop-out limited the damage to one run, and it seemed as if that made Benson realize that he could still pitch in the major-leagues, as he settled down thereafter very nicely. He feels a lot like a 2010 version of Doug Davis, in that Benson needs to use the corners of the strike-zone to be effective, and has no problems with working out of the stretch, or putting a batter on if he thinks he has a better chance of getting the next one up.

He scattered six hits and four walks over six innings, loading the bases up twice more, in the second and the fifth. But no Padres crossed the plate on either occasion, and the only other run Benson allowed was when the Padres' catcher got hold of a hanging curve-ball, and deposited it into the left-field bleachers. Otherwise, that'll do, though he got more outs in the air than on the ground, which may not play as well in Chase as it does at the capacious, sea-level Petco. If my schedulemath is correct, Benson's next start will be either against the Phillies in Phoenix or, should they skip him because of the off-day, against the Rockies in Coors. Let's see how he does in either.

It's time to send Jordan Norberto down. Even in a minuscule sample size, it's painfully obvious that his control is just not major-league ready. Of the six batters he faced this evening, three more trotted down to first on a free pass, including another one with the bases loaded, run giving him a total of six walks in just three innings of work. That's an untenable rate for any major-league pitcher, and he needs to go back down to Reno to sort that out. That would probably mean a return of Esmerling Vasquez, since Clay Zavada was last seen hitting the DL for some reason, leaving us LOOGYless. However, there's not much point bringing someone in to walk opposing lefties.

The seventh which resulted pretty much put the game beyond reach; we had to use Bob Howry to finish off the inning after the burst of NorbertoFAIL. With the bases still loaded, a single scored two inherited runners, and a potentially-recoverable two run deficit was now five, and basically insurmountable. Blame for the inning must, however, be squarely placed on DbacksSkins. In blatant defiance of my edict handed down on Thursday, he posted a picture of an eel in the Gameday Thread. I deleted it swiftly, but the damage had already been done, and three runs ensued. I trust you have learned your lesson, young man.

As for the offense... Well, there basically wasn't any. We were four-hit by a combination of a disturbingly-dominant Kevin Correia, who struck out one short of his career-high nine, in only 5.2 innings of work. One of our four hits came from Benson, whose last at-bat in the majors was back in July 2006. Conor Jackson and Justin Upton singled off Correia, and both men stole second, while Kelly Johnson doubled with two outs in the ninth. Mark Reynolds continued to struggle, going 0-for-3 with three strikeouts. On this road-trip, he is 2-for-20 and has been fanned eight times. 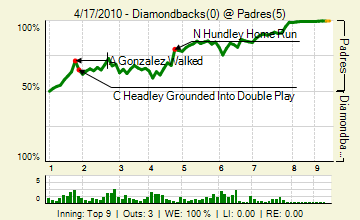 S'funny how things change. On Thursday night, we were one out away from taking our first series in Dodger Stadium for approaching three years, and going to a record of 6-3. Then, Stephen Drew lobbed the ball into the stands, and less than 48 hours later, we find ourselves looking up at .500. Time to find out what this team is made of, because the 2010 honeymoon is clearly over. Preventing the sweep tomorrow, then facing the Cardinals and Phillies will certainly be an interesting test. The team will be glad to hear, since I am now 0-3 in this area, that  I won't be recapping for a bit. Tomorrow is a scheduled socorecap, Sprankton is covering Tuesday, and wailord will be pinch-covering Monday, since Mrs. SnakePit got us some nice dugout seats for Monday's game, so I won't be about to do that.