Diamondbacks 3, Padres 6: Bullpen Blows Lead, Needs to be Blown Up

Share All sharing options for: Diamondbacks 3, Padres 6: Bullpen Blows Lead, Needs to be Blown Up

Some problems cannot be resolved without C4, and this may be one of them.

On a night the Diamondbacks fielders put on a clinic on how to be a defensive stud, the bullpen put on a clinic of what not to do - mainly, allowing the leadoff batter(s) on base and giving lots of free passes. The lead Arizona battled to gain was once again lost in the late innings by relievers who clearly aren't playing up to their potential. While this game did have some up sides, it will be difficult to see them through the clouds of steam coming from the starting pitchers' ears.

Gory details, should you really want them, after the jump.

The last time Edwin Jackson took the mound, he received 15 runs of support. He would have no such luck tonight. Jackson played with fire in the first inning, allowing two walks and throwing 24 pitches, but got out of it with no damage. He just about halved that in the second inning, helped along by a fabulous, off-balance double play turned by Stephen Drew and Kelly Johnson to end the inning. All around the defense was truly spectacular. Two double plays from our middle infield, excellent picks at both hot corners, and running grabs in left field. Where last year's defense would have crumbled, this year's shone, and while in the end it didn't make a difference in the win-loss column, it means a lot knowing they have truly improved.

The Diamondbacks' scoring started and ended in the third inning. Conor Jackson singled to lead off the inning and Drew followed that up with a walk. After Justin Upton lined out to center and Mark Reynolds popped straight up to catcher (he was practically back in the dugout by the time it was caught), it looked like leadoff base runners would be stranded again. But Kelly Johnson put a good at-bat on Jon Garland to earn a walk and loade the bases. Garland walked in Chris Young on four straight pitches (they were nowhere close to the zone - meet the new and improved CY, now with more plate discipline!) with the bases loaded to give the Diamondbacks a 1-0 lead. Gerardo Parra followed with a single to right to score two more runs. The Diamondbacks' 2-out run production continues to be stellar, and they ran Garland's pitch count up to nearly 80 after three innings.

Edwin Jackson responded to this 3-0 lead by promptly walking the pitcher Garland. Luckily, a double play followed, and Jackson would keep the Padres from even threatening to score the rest of his time on the mound. Jackson scattered three hits and four walks over his six solid innings of work, and only one baserunner reached third against him. It was a very strong outing from our new #2 starter. Meanwhile, Jon Garland managed to make it through five innings with the only blemish being the 3rd, thanks to some baserunning blunders. Both Conor Jackson and Justin Upton were out at second trying to stretch singles to left field into doubles. Jackson was nearly safe on his, but his momentum carried him off the bag. Upton was caught jogging to first base and couldn't make up the speed to get to second. And there were several balls hit, particularly off the bat of Stephen Drew, that would've been long gone in Chase Field. Then, the San Diego bullpen made quick work of the Diamondbacks hitters - four innings, four relievers, 12 men up, 12 men down. See, Diamondbacks relievers, that's what a bullpen is supposed to do.

The momentum had clearly started to shift to the other dugout. Jackson was pulled after the sixth inning at 109 pitches, and Bob Howry came in for the 7th. A leadoff double came around to score to make it 3-1, but Parra kept it that way with a running grab at the wall in left. The real drama came in the 8th when Aaron Heilman put two men on - The Gnat David Eckstein and The Thorn Adrian Gonzalez - with one out. When Chase Headley popped out to Reynolds at third, it seemed like he might escape unscathed. But Heilman couldn't find the strike zone if it had come up and introduced itself to him. Will Venable walked to load the bases and Kyle Blanks walked to score Eckstein. Scott Hairston then worked a 3-0 count but eventually also popped out to Reynolds, barely in front of the wall. The lead was intact, but not safe.

Juan Gutierrez came in to pitch the 9th inning for Arizona. This was not any sort of slight against Chad Qualls, Qualls had simply thrown 49 pitches in two high-stress innings the previous two days, so it was Juan's turn to spell. But, he too couldn't find the plate, and those leadoff walks will bite you in the butt. With two outs and a runner on third, it was Eckstein who smacked a shot to left field just out of the reach of Parra, and that tied the game at 3-all. Adrian Gonzalez was intentionally walked to face Headley, who promptly deposited Gutierrez's third pitch into the right field bleachers. Those dreading a third straight night of extra-innings baseball probably didn't mean for the game to end in a loss, but there it was... a 3-0 lead gone in three innings to end in a 6-3 loss. 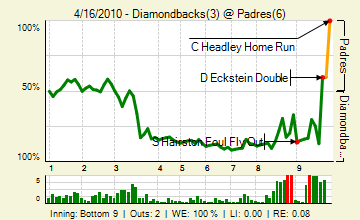 It was an interesting gameday thread tonight. Some lurkers showed their faces - welcome, Dallas! - and our attention seemed to be split a few different ways. Though that's not exactly different for us. Once the 8th inning started though, it was pretty much doomsville. When I took the roll call nearly 200 posts ago, 'Skins led the way, and I joined him in triple digits. All present were: snakecharmer, unnamedDBacksfan, DbacksSkins, kishi, Rockkstarr12, 4 Corners Fan, NASCARbernet, Pyromnc, JoeStock, piratedan7, singaporedbacksfan, Fiona, katers, hotclaws, emilylovesthedbacks, Wailord, Esther Schindler, SaveUsY2J (back from the netherworld), Dallas D'Back Fan, pygalgia, njjohn, Wimb, BattleMoses (oh no, there are two of him!), ZonaBacks10, and Amit.

There were some positives on the defensive side, and it's just one game out of 162. But three blown saves is just painful, and if our bullpen can't get it together ASAP, it's going to resemble 2009, and that will make nobody here very happy.

Steve Gilbert announced on Twitter that it is Esmerling Vasquez being sent to AAA Reno to make room for tomorrow's starter Kris Benson. He'll be opposed by Kevin Correia, off of whom Arizona batters hit three home runs opening week. If this week has been any indication, the starters won't play into the decisions. One can only hope for a large run differential (much like Correia received his last start) and a solid start by Benson to relieve the relievers. Tomorrow's game is at 5:35; be there or be under a rock hiding from all the mess.