I had a terrible sense of doom as soon as Chad Qualls started pitching in the ninth. Somehow, even the two-run lead just didn't feel "secure". And when he walked the lead-off LA batter, that doom became a feeling of inevitability. So it proved. After coming within one out of taking their first series victory in Dodger Stadium since August 2007, the Diamondbacks couldn't hold on. Despite a sterling pitching performance from Dan Haren, the bullpen couldn't hold on to the 3-1 lead they were given: Aaron Heilman allowed a two-run homer, Qualls gave up another two runs in the ninth, and Blaine Boyer took the loss, retiring one of four batters he faced.

I think losses like this are probably more painful than the blowouts. Because if last night was a game we probably shouldn't have won, this was one we certainly should have. Weeping, wailing, recriminations and finger-pointing to follow after the jump. And, perhaps surprisingly, some reason for hope.

The Diamondbacks took advantage of some Dodger mistakes - on and off the field to score two runs in the second. A fly-ball by Chris Young was lost in the dusk, and dropped in for a double. After he stole third-base [getting such a jump he could have walked there], Joe Torre opted to pitch to John Hester rather than walk him and go after the pitcher: an RBI single ensued. Haren bunted over the catcher, and a groundball by Conor Jackson was fired high and wide into the dugout by Rafael Furcal bringing in another run. Los Angeles threatened to comeback immediately. An Abreu error, a single and a wild pitch put men on second and third with no outs. But Haren calmly struck out the next two batters, then AJ Hinch did not make the Torre mistake - though I think this was purely Dan's decision - walking the #8 intentionally, and then fanning the pitcher with the bases-loaded to end the threat.

After extending Hiroki Kuroda for 48 pitches through two innings, the Diamondbacks appear to have given up on that plan, with the next six outs taking him only 19 pitches. As a result, despite a nine-pitch first, by the end of the fourth, Haren had thrown more pitches than his opposite number, 76-67. Interestingly, the Dodgers'' #8 was up with a base open and two out again, but as it wasn't the tying run on second, Haren pitched to him. And fanned him, but Hester flat-out clanked the third strike. However, no damage ensued as a nice play by Jackson, playing 1B for the first time this year, ended the fourth.

The Diamondbacks extended the lead in the fifth, with Haren scoring the third run. He doubled down the left-field line, and Jackson's third hit of the night brought him in. However, the Dodgers got on the board in the sixth, with a leadoff walk to Mrs. Ramirez coming around to score. It might have been worse, but Haren fanned Martin with a man on third and one out, and then ended the inning with a flyball to Justin Upton. The runner made third on a stolen-base, and it took an impressive bit of backing-up by Stephen Drew to save a wild throw down by Hester - between that and a number of balls clanking off his glove, I will be happy to see Chris Snyder back tomorrow.

I was surprised to see Haren, at 111 pitches, hit for himself in the top of the seventh. He allowed a leadoff single in the bottom-half, then got a shallow fly-out to center, and was pulled after 121 pitches, the most he has thrown in a game since matching that number on August 16, 2007 when with Oakland. Haren went 6.1 innings, allowing six hits and two walks (one intentional), while striking out seven LA batters. However, it was probably one batter too long: I can see why Hinch wanted to save the bullpen, but Aaron Heilman promptly blew the lead, with a two-run homer to Matt Kemp, tying the score at three. If a tiring Haren hadn't allowed that lead-off hit, we might still have had the lead.

Still, Heilman got the final two outs, around a walk to Mrs. Ramirez, making it a fresh game in the eighth. Upton certainly took the starting over to heart, launching a bomb into the bleachers in left-center, leading off, and giving the Diamondbacks the lead right back. He then preserved the lead with a great grab up against the fence in right-center, of a deep drive of Esmerling Vasquez; with a runner on first, that would probably have led to the game being tied again if he hadn't got there. It's probably the first nominee for the Play of the Year end of season award, and kept Arizona with a one-run lead into the ninth.

The Diamondbacks tacked on an insurance in the ninth. Hester doubled, taking advantage of Mrs. Ramirez's glacial range in left, was bunted to third by Augie Ojeda and scored on an infield error. A walk to Drew then loaded the bases for Upton, but he fouled out near the first-base dugout, and Mark Reynolds grounded out to first on an excuse-me swing. That set the stage for Qualls, seeking redemption for Thursday's blown save, but facing the top of the Dodgers order - and, if any of them got on, Mrs. Ramirez as the tying run. Ulp. And a lead-off walk, followed by a wild pitch brought that possibility to fruition...

Ramirez singled. One-run game. Loney singled. Tying run on second. And at the plate was Casey Blake, whose double off the wall last night had cost the save. On an 0-2 pitch, Qualls got a bouncing ball to Drew, whose defense had been near-impeccable all season to date - but he hurried his throw and lobbed what would have been the final out into the dugout. As a result, Qualls became the third Diamondbacks closer in franchise history to blow ninth-inning leads on consecutive nights: the two previous victims being Jose Valverde on May 28-29, 2006, and of course, Byung-Hyun Kim in the 2001 World Series.

So, for the second consecutive night, we went into extra innings - the Giants, due next up to face the Dodgers, must have been loving this. Arizona went down 1-2-3 against Broxton, and then Blaine Boyer came in, to try and shut down LA, knowing that there weren't many arms available in the Los Angeles pen beyond their closer. It didn't happen. A leadoff single, bunt, intentional walk, passed ball (another blot on the Hester copybook) and a single over the drawn-in outfield proved sufficient for the Dodgers. 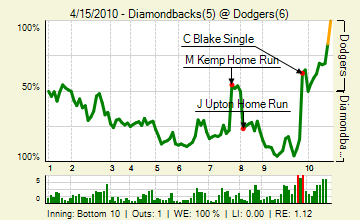 Well, I suppose we can be happy it wasn't the eighth inning that was the downfall of this team. No, tonight it was the seventh and ninth innings which were responsible. So much blame to go around: Hinch for leaving Haren out there. Haren, for not admitting he was gassed. Almost every reliever used: Heilman, Qualls, Boyer. Drew for his throw. Upton for popping up with the bases-loaded and one out in the ninth. Hitting .231 with RISP. So much fail. And yet... WE STILL NEARLY WON THIS GAME. That's the weird thing. We blew chunks in many ways, and still made a real fight of it. While the pain of it is undeniable, this just feels different from your 2009 Diamondbacks. Or is it only me?

And so, it's on to San Diego, where we'll try to take two of three and split the road-trip. Been nice if we'd only needed one of three to reach that mark, but there you go. We'll see what the back of the rotation, and in particular Mr. Anna Benson, looks like in PetCo.