Diamondbacks 9, Dodgers 7: In Which Tolstoy Was Like "Damn This is Long"

Having dropped the opener to the Dodgers, the Diamondbacks came into tonight's game looking to even the series at a game apiece, and stay over .500 in the process. Given the team's struggles against Los Angeles since they acquired that left fielder with moldy Tootsie Rolls for hair (9-19 against the Dodgers since mid-2008), they faced an uphill battle, especially depending on Rodrigo Lopez to outpitch Chad Billingsley. As it turned out, neither pitcher was that much of a factor in the ultimate outcome, and both were out of the game approximately 17 hours before the game finally finished.

After the jump, a lot of words about a lot of crappy baseball.

The word for Lopez's start tonight is probably "battling." It's tough to give up 11 hits in five innings (plus a walk) and dance around enough danger to give up just four earned runs. Granted, it's harder to be fazed by that after watching multiple seasons of Doug Davis.

Lopez was in trouble from the start. Furcal hit a little bloop single on a ball in on his hands, and promptly stole second on a bang-bang play. Kemp drew a walk. Ethier hit a ground ball to the right side that LaRoche bobbled, then tossed to Lopez, who couldn't catch the soft toss and booted it up the right-field line. Somehow it was scored a hit (the ghoooooost of Tulowiiiiiiiitzki!) and an error that advanced the runners, and a run scored. Manny followed with a sac fly, but Lopez somehow managed to escape by getting Loney to GIDP. Still, Arizona was already in a 2-0 hole.

Lopez worked around a pair of two-hit hits in the second, but in the third, another leadoff single and stolen base got him in trouble with Kemp, and Manny drove him in one batter later. Kemp got him again in the fourth with a two-run blast to straightaway center, and sitting on 90 pitches already, Rodrigo finally settled in for a 1-2-3 fifth.

Meanwhile, the Diamondbacks kept crawling out of holes, only to promptly fall into different holes and sprain their figurative ankles. It certainly didn't look good in the first three innings, with Billingsley's only blip being a ground-rule double by Drew in the first. They were making Billingsley work a bit, though, and his pitch count continued to be almost as high as Lopez's. In the fourth, Drew took a fastball away and powered it over the fence in right center for a home run. Upton followed with an infield hit, and LaRoche slapped a double into the gap to put runners on second and third with just one out. A pair of sac flies by Reynolds and Young was enough to tie the game at three.

Trailing again in the fifth, Arizona took two quick outs turning the order over. But Drew drew a walk (having been crushed twice already, Billingsley clearly wanted nothing to do with him in the third at-bat), Upton smacked a double, and LaRoche followed with a base hit up the middle to score both runners. Just like that, the game was tied.

In the sixth, Gerardo Parra pinch hit for Lopez, and was intentionally walked with a base open, kind of a surprising move. Jackson has struggled against Billingsley in his career, but he had also seen him three times that day already, whereas Parra was cold off the bench. CoJack made them pay by roping a double around the bag at third, giving the Diamondbacks a lead and chasing Billingsley in the process.

But it wouldn't last. Boyer came in for the bottom half, and promptly gave up a double, single and sac fly to cough up the lead. Norberto came in to stop the bleeding, but gave up a single and a walk of his own to load the bases before striking out Loney. Howry spelled Norberto to face the righty Blake, and got him to foul out harmlessly to Snyder to get the D-backs out of the jam.

So after about three hours and 650 baserunners, everything was essentially reset for the final three innings. It was a sign of things to come.

Or was it? Justin Upton was up first in the seventh, and absolutely crushed a ball to center field to quickly give Arizona the lead once more. Afterward, the booth spent a considerable amount of time watching Upton sit in the dugout wearing a hoodie. That's how interested they were in this marathon of a game.

The Diamondbacks threatened further in the inning, working two walks to put runners on first and second with one out. But Ojeda grounded feebly into a double play and the threat was quickly ended.

Arizona continued to waste chances to increase their lead in the following two frames as well. In the eighth, Snyder reached on an infield hit and Ryal walked behind him. But Jackson grounded into a double play to quickly put the brakes on that inning. And in the ninth, Reynolds and Young reached consecutively with two outs, but Ojeda flied out.

Those wasted opportunities would prove costly. After mustering virtually nothing in the seventh and eighth, the Dodgers put together a rally against Chad Qualls, who clearly didn't have his best stuff. His sinker stayed up in the zone with little break, and his slider (with a couple exceptions that were fouled off by Loney) didn't have much bite. He got ahead 0-2 on Manny, but threw him a fastball right......down......Broadway that Manny pounded into the right-center gap for a double. He was promptly replaced by someone less fat and unkempt. After a tough at-bat against Loney (got ahead 0-2 but Loney kept fouling off sliders), Qualls struck him out with a fastball at the eyes. But he hung a slider to Blake, who was about 15 inches from ending the game on what ended up being an RBI double. Qualls escaped without losing the game, but the save was blown and it was time for bonus baseball! As if we needed bonus baseball in a game that had already run four hours to that point.

The teams traded zeroes in the 10th, although getting the Dodgers side out was a little more complicated. Rosales worked around a leadoff single to get a couple strikeouts (although after Kemp's K, they had Furcal caught between first and second and LaRoche dropped the throw over).

But in the 11th, everything changed. The planets aligned, yin and yang were equal, and karmic retribution swung our way. For with his bullpen severely depleted, Joe Torre turned to the former bane of our existence, Russ Ortiz. Ortiz never met a buffet he didn't like or a jam he couldn't get into, and sure enough, he helped the Diamondbacks take the lead one more time. Drew pulled a single into right to lead things off. Ortiz got Upton to pop out on an overpowering 81 mph fastball on 3-0, but looked wild in walking LaRoche. Reynolds followed with a sharp base hit to load the bases, and Young got the job done by roping a pitch into left that fell short of Reed Johnson in left. The chance of the ball being caught prevented more than one run from scoring, but the bases stayed loaded with one out and Ojeda finally cashed in with RISP, lifting a sac fly to center to score an insurance run. Ortiz tried his best to help his old team even further, throwing a wild pitch and intentionally walking Chris Snyder, then going to 3-2 on Rosales (0-3 batting in his career) before getting him to ground out on a 27-hopper up the middle.

It wasn't over without a little bit of a heart attack in the bottom of the 11th, when Loney reached on a leadoff base hit. But Rosales got Blake, Ellis and Martin to close out the game and pick up the victory, and after more than five hours of baseball, the Diamondbacks had earned a win.

Remember, please keep your hands and arms inside the carpet while you ride the Fangraph. 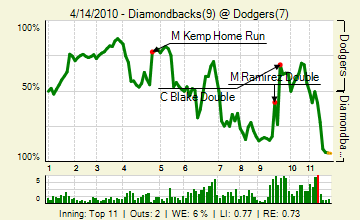 At some point later today, Dan Haren will take the mound for the series finale, as we try to win three straight series to start the season. You know, assuming someone can wake Vin Scully from his nap and convince the players from both squads that this won't ever happen again.