Share All sharing options for: Diamondbacks 5, Dodgers 9: The Kennedy Assassination

The paragraph above will be available in a less Scottish version, along with the rest of the recap, after the jump.

I don't know about you, but this wasn't quite the way in which we wanted to start the road-trip. Ian Kennedy took 100 pitches to get through 4.1 innings, and was victimized by the long-ball, giving up three homers and six earned runs over that time. Another blast, this time a three-run shot off Esmerling Vasquez, basically nailed any hope of the Diamondbacks mounting a comeback, though Arizona did show some late offensive energy, and did at least make the score look respectable.

Last time out, Kennedy pitched five innings, but didn't even get that far this afternoon, a result which was particularly disappointing after he looked fine in the first inning, retiring the Dodgers 1-2-3. He seemed to go to pieces in the second frame, loading the bases with one out on a double, a walk, a hit batter and a wild pitch, but limited the damage to a sacrifice fly, striking out his opposing number to end the frame. He retired Los Angeles in order again in the third, but then fell apart once again, going homer, double, homer, walk to open the fourth.

By the time he was pulled from the not-so grassy knoll in the fifth, he had allowed six hits and three walks, though in mitigation, the strike zone did appear to be somewhat inconsistent. Jordan Norberto came in with two men already on and one out, which I suspect may not be the best way to use him. His control was suspect in spring, and he walked two men here, including one with the bases-loaded to force in a run, but also got Russell Martin to stare at a 80-mph curve for strike three, after four consecutive fastballs in the 93-94 mph range has been fouled off. If Norberto can be consistently harnessed, he'd be very dangerous.

While my fantasy team appreciated the donation of three RBI to Andre Ethier by Vasquez, it didn't help his chances of surviving on the 25-man roster when we need a fifth starter, for Saturday's game in San Diego. Nick Piecoro reckons that Leo Rosales is the most likely to be Reno bound, but if I recall correctly, Vasquez still has minor-league options, and Rosales doesn't. This afternoon's performance won't have done Vasquez any favors. Rosales and Blaine Boyer finished off the afternoon's work without further significant incident.

On offense, Arizona certainly had their chances, with no less than 14 of their 34 at-bats - that's more than 40%! - coming with runners in scoring position. Clayton Kershaw, for the Dodgers, was effectively wild: while he walked five Arizona batters in 5.1 innings, he allowed one double and two singles, and struck out seven. One sensed this was probably going to be the case early on - Conor Jackson reached second-base with no outs in the top of the first, and failed to move from that spot.

With one out in the fifth, and the Dodgers lead still manageable at only three runs, we loaded the bases without a hit, on two walks and a hit batter. But Justin Upton grounded into a force at home, and Adam LaRoche flew out to waste the chance. And I tend to feel we could have done better than one run in the sixth, on an RBI single by Chris Snyder, after the first two men got free passes. While we did score three times in the seventh, on a two-run shot by Mark Reynolds and an RBI single from Kelly Johnson, that was it as far as production was concerned.

No shortage of men reaching base; Snyder and Chris Young each did so safely three times, while Jackson, LaRoche and Reynolds managed it twice. However, getting them home from there... Not so much. On the bright side, we continued our run of ongoing solid defense: through the first seven games of the season, the Diamondbacks have committed only two errors: that's the least in the National League, and obviously, a great improvement over last season  Long may that continue. 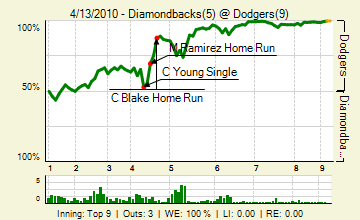 I must confess, my review of this contest on Tivo was more of a token gesture than anything detailed - seemed pointless to watch a game when I know it's going to end badly so I'll save my cutting-edge analysis for another day. Especially when it dragged on for three hours, 42 minutes: fortunately, Mrs.SnakePit had extended the scheduled coverage, but why does an eight and a half inning game take so long? That's the longest such for us since May 10th last year, when we beat the Nationals 10-8, in a game that had thirty hits between the two teams.

Tomorrow, we'll see whether good Rodrigo Lopez, as seen against the Pirates, was an optical illusion. Hopefully, that turns out not to be the case, and we can then hand the ball to Dan Haren on Friday. Let's get through tomorrow first...