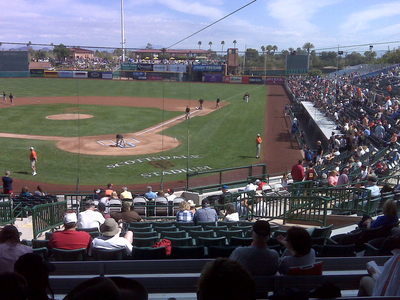 via Greg Salvatore's The D-blog

Here's another couple of numbers to take away from this afternoon's contest, that certainly played their part in explaining the loss:

Yup. The Giants were remarkably, freakishly clutch, hitting .700 with men in scoring position. A huge chunk of that, naturally, came in the frightful fifth. Augenstein had retired the Giants without much trouble in the fourth, sending them down 1-2-3, but that was far from the case in the fifth inning, as the Giants sent thirteen men to the plate. After allowing four hits, a walk and hitting a batter, Hinch sent in the cavalry to relieve Augenstein, in the shape of Newby. However, things went from bad to wor... No, make that atrocious to abominable, as it took Newby five attempts to get the third out of the inning, including a three-run jack to Bowker.

Add on a three-run ninth, when Blaine Boyer got swatted about (spoiling the otherwise beautiful symmetry of the Giants line for the day), and even though we are barely into spring training, our pitchers have already allowed 3+ runs in five different innings. AJ Hinch was not impressed, saying, "Those big innings are not what we want to see. That's a point that we'll recognize. Control the inning. Being able to stop the bleeding when you have the opportunity to." Of course, it doesn't help that you pretty much have a set list of pitchers you need to use, but it has hardly been an auspicious start for our hurlers, who have now allowed 31 runs in 25 innings of work.

The prospective candidates for the fifth spot in the rotation have fared especially poorly in their spring debuts:
Billy Buckner: 2 IP, 3 H, 2 ER
Rodrigo Lopez: 2 IP, 4 H, 3 ER
Aaron Heilman: 1 IP, 5 H, 4 ER
Bryan Augenstein: 1.2 IP, 4 H, 6 ER
That's a total of 16 hits and 15 runs in 7.2 innings of work. Ouch. We'll see whether Kevin Mulvey fares any better tomorrow, when he gets the start in one of the two split-squad games. Of course, it is horrendously early, but it's probably safe to say that on the first go-around, Buckner is currently the leader, albeit only because he's the sole one with an ERA in single-digits.

Despite those issues, there were some positives to take away from today's performances. Edwin Jackson worked two scoreless innings - he gave up a couple of hits in the second, and was the beneficiary of a sacrifice fly double-play, courtesy of Cole Gillespie in left-field, who got the runner at home-plate. Our starter said afterwards, "I felt pretty good for the first day. Stayed around the plate for the most part, commanded the pitches, not a bad first outing. Pretty much came with the full arsenal today just to see how it is." Juan Gutierrez also seemed sharp, fanning two of the three batters he faced, while Jose Marte and Roque Mercedes posted scoreless innings.

On the offense, Chris Young was the star of the day, going 3-for-4 with three RBI and falling a triple short of the cycle. He did strike out in the second with the bases loaded, but even there, reports indicate that he had a good at-bat and worked the count deep. His first-inning single was a bunt hit, and improving and using his speed was something he worked on in the off-season, saying "With my speed I should be able to bunt." Today showed this is indeed the case, so be interesting to see if there is another string to Young's bow in the regular season.

There were some other decent performances at the plate for the Diamondbacks this afternoon. Stephen Drew, batting lead-off, went 2-for-2 with a walk, while Miguel Montero reached safely three times, on a hit and a pair of free passes. Kelly Johnson doubled and added a walk, while Jeff Bailey, getting the start at first this afternoon, had a single and a walk. John Hester and Sean Coughlin both got knocks coming in as pinch-hitters. All told, Arizona got 13 hits and six walks, which would normally be a good day's work. However, the result of all that was still well short of what the Giants racked up in the fifth.

Moving on to other stuff, get out the paper bag and breathe into it, as Brandon Webb wants everyone to calm down about any thoughts of him hitting the DL. He said, "It's too soon to tell... Even two or three days in advance is too much to say. We're just day-to-day. That's all it is. Hopefully I'm ready by the third game of the season; that's definitely not out of the question either. I'm still aiming for that. But if there is a little setback, anything that I can get is better than what I got last year." However, it does seem the scheduled bullpen session, originally set for tomorrow or Monday, is now more likely to happen beyond that.

Good things being said about Tony Abreu at shortstop by AJ Hinch. "I’ve been impressed. I think he plays with great energy. He has a knack for finding the ball. He’s made a couple of acrobatic plays early on, which has been nice to see." Although we're only a few days in, it seems to be that Abreu and Rusty Ryal are the early leaders in the race for the 25th spot. Hard to say, however, whether they both might be better off playing regularly in Reno, rather than getting the very sparse at-bats usually available to the last man on the roster. However, it does seem likely that will be a position player, Josh Byrnes being quoted today as preferring not to have 13 pitchers on the roster.

Going forward, I'm not going to bother with Gameday Threads for these contests, unless it's being  shown on TV. We only had 35 comments today, and I was responsible for most of those. It's clear there isn't enough interest in participating to justify the effort involved on my part, so I'll just stick with recaps. Life's too short. I'll see you tomorrow for reports on the simultaneous double-header against the Rockies.