Share All sharing options for: Book Review: The Baseball Codes 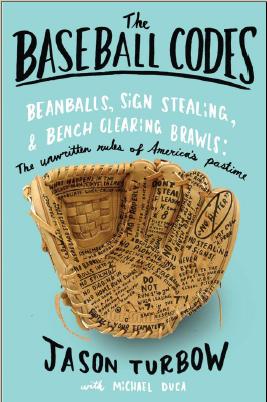 With the start of baseball season comes a slew of new books, and for a book nerd like me, it's one of the best times of the year.  Most books have little hope of breaking into the larger "baseball book canon," and many can be obviously dismissed on sight like this book by Mark McGwire's brother.  Still others are good to better books that deserve any fan's attention.

The Baseball Codes by Jason Turbow and Michael Duca is a book that tasks itself with attempt to provide a guidance to the overlapping and byzantine "unwritten" rules of baseball.  Given that unwritten rules are developed on the field and passed player to player, it is an area that is generally shadowed in mystery, misinformation, and misunderstanding.  To what should the baseball writer or fan think when Albert Belle breaks someone's nose while running to second?  Given the reaction at the time and even now, the observer of baseball has a completely different view from those that actually play the game.

Turbow and Duca's effort to break the silence is admirable, and they provide an excellent oral history of the game.  Last year, another book attempted to catalog baseball's code, but it suffered from a poor structure.  Anecdotes were inset in numerous pages, breaking up the flow of reading.  The Baseball Codes instead divides the book by various subjects and situations, and then using contrasting anecdotes within the chapters to provide a colorful look at an issue.  It results in a smoother read, and gives the authors a chance to build a stronger narrative with some of baseball's best stories.

And make no mistake, even if there wasn't an underlying theme of the "unwritten rules," this book would be gem simply for the wealth of stories.  Some are well-worn, like Yogi Berra chatting up the first baseman when he'd reach base, but then shutting up and concentrating when he was given the sign to steal.  The league was quick to pick up on this particular quirk and Berra had to learn to keep talking to hide his steal attempts.

Other stories are a bit more obscure like a rundown of significant batter attempts to throw their bat at the pitcher, or Nolan Ryan, one of the ultimate knockdown pitchers, getting spooked at throwing inside for a stretch after injuring someone.  Nearly all of the stories in the pranks section had me laughing, which most likely disturbed my wife in the other room.

The Baseball Codes is not without minor flaws, though.  Some of the shorter stories, especially those feature lesser known players, felt awkward to keep track of all the details.  If Codes suffers from anything, though, it would be that it is simply too short.  I can't imagine the amount of work it took to gather the wealth of information already in the book, but I certainly didn't want it to end.

Codes isn't just a collection of baseball anecdotes, though, and its central theme is certain to give some fans a problem.  Going just an informal survey of my observations interacting with fans over my short life, there's seems to be somewhat of a divide on the validity and place for the unwritten rules in baseball.  Codes ultimately comes down in favor of the rules, suggesting that their pervasive place within the game provides a degree of comfort and connection that can be hard to find in an industry that can so quickly spit out members.  It's a position I'm inclined to agree with.  Ultimately the rules, which evolve over time as different players and norms move in and out of the game, are insular and simply not for us.

It's from this point that the Baseball Codes moves from merely a good baseball book, to a better or even great one.  There is a difference between how baseball is viewed by players and by fans, and few sports have such a strong distinction between the two sides.  Fans care about the theoretical game: statistics, mathematics, attendance, an authentic experience.  Players care about the literal game, and each other.  Ultimate, as Turbow and Duca show, this is the greater purpose the unwritten rules serve, to pass on an oral tradition of the game.

I was nearly finished with the review a couple days ago as I was nearing the end of the book.  I had been reading it during my breaks at work, and about halfway through I knew I had to share it.   Yesterday, a gentleman came up to me with a copy of the book (remember, I work at a bookstore) introduced himself as one of the authors, Michael Duca.  We chatted for a few minutes about the book, and he signed the copies we had in the store.  Of course, one went home with me.