It promised to be quite an interesting weekend, shall we say, for myself and Mrs. SnakePit. There will be gambling, midgets (two separate sets), and our first trip to University of Phoenix stadium, for Wrestlemania 26 along with 70,000 other fans. And beer. I think there may be some beer consumed over the course of the three days. All this and a fantasy baseball draft will be squeezed into proceedings as well.

Details of everything after the jump. You can't resist, can you. 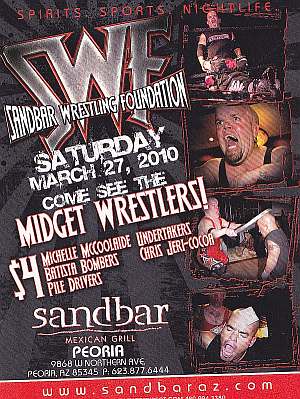 The weekend starts on Friday evening with Mrs. Snakepit-in-Law's 82nd birthday party. That's going to be at Casino Arizona - dinner and the Showstoppers show there, but I'll personally be keen to scope out what progress might have been made on the D-backs spring training complex being built nearby.

Saturday... I'm not quite sure how this happened, but somehow, Mrs. SnakePit has become the go-to person - and here goes some gratuitous Google keyword stuffing - for Arizona midgets, or Arizona little people, if you prefer [and some of them do, some of them don't]. Hence, that evening, we have two separate events to oversee: at Myst in Scottsdale, there's a Moulin Rouge-themed party for the owner's birthday, at which we are supplying the host. And later, on the West side at the Sandbar in Peoria, there'll be... Well, the flier on the left pretty much describes what'll be going on there.

That'll be a nice warm-up for Wrestlemania XXVI in Glendale on Sunday, which promises to be quite an experience, even if our seats are not quite as close to the front as we're used to for IZW shows! I think for that we are going to try and beat the crowds by going out there in the late morning - have lunch, maybe take in a movie at Westgate, before heading over to the stadium with everyone else. Not been there before, so even that will be something of an experience.

On that basis, trying to work out when to have the fantasy baseball draft was basically impossible. So I opted for democracy at its purest, and created a Google Docs poll to ask the other 13 managers what times on Saturday, Sunday and Monday they could make. The time which most ticked off as good would be the winner. Having received the ballots from 12 of them - and if you're the 13th, what happened? - things got even more complex, because no one time was acceptable to everyone. Tied in 3rd place, with six votes, were several slots: 10am + 11am Saturday, 3pm + 8pm Sunday, and 7pm + 8pm Monday. Runner-up, with seven votes, was 9pm Sunday night: whether I could make that one, personally, depends on how long Wrestlemania took, and probably more importantly, how long it took us to get out of the parking lot.

But the winner, with eight of the possible 13 votes, is 9am Saturday morning, Arizona time. So that's when it's going to be. Sorry if you are one of the five people for whom that doesn't work - get your draft lists in order, because the robot will be picking for you. There are a number of different ways through which CBSSports.com lets you do that, fortunately - having to manually rank 300 players in order of preference is not exactly my idea of a fun time. The one which I have used is "average draft position" - the orders from the live drafts that have already occurred are used to vote on a player's overall position. The top three right now are Albert Pujols, Hanley Ramirez and Alex Rodriguez, with the highest-ranked Diamondback, Mark Reynolds at #23.

I feel your pain, since that could well include me, since I am working on Saturday. Or supposed to be, anyway... :-) Maybe I can take a very, very early lunch-break or something - just to make sure my roster doesn't include Joe Nathan. But I have full confidence in my draft robot, who'll probably do better than I would. And if my team sucks, I'll have a ready-made excuse, and will be firing the draft robot, sometimes around the beginning of May. And it's not too late to sign up for your own league with CBSSports.com. You get 50% off the regular cost, we give the winner a free SnakePit shirt, and as a special, added bonus, you will also get a guaranteed slot in SnakePit Baseball for 2011. What more could you possibly want?

[CBSSports.com is an SB Nation partner and paying sponsor of the SB Nation baseball communities. This post is one of a series of sponsor endorsed posts related to the CBSSports.com Fantasy Baseball Commissioner League.]