Diamondbacks 3, Giants 4 - The Last of Tucson

Share All sharing options for: Diamondbacks 3, Giants 4 - The Last of Tucson

Yep - that is almost certainly the last spring-training game we will attend in the old pueblo. Mixed feelings about that - certainly will not miss I-10 and the tailgating assholes in their SUVs who inhabit it - but if there were a game to go out on, today's was as good as any. Marvelous fun tailgating in the parking lot beforehand, to the extent that it seemed a shame to have to stop it for baseball; many memorable snarky comments during the game itself; perfect weather for it; the only thing missing was a Diamondbacks' win.

Details after the jump. Oh, and pictures. Lots of pictures. 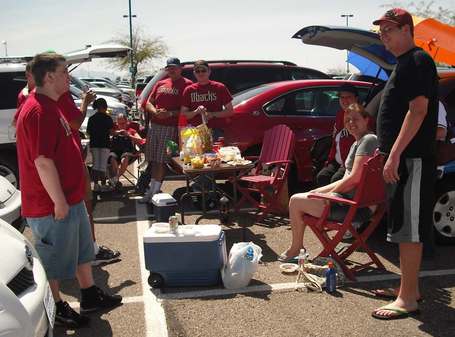 Pre-game in the parking lot. Another beer? Don't mind if I do...

The chances of extending our SnakePitFest victory streak pretty much evaporated after Edwin Jackson went walk, hit batter, homer to start off the game, giving the San Francisco Giants, in effect, a three-run head start, and bringing back memories of Thursday's debacle. However, the Diamondbacks kept things almost entirely in check from that point on, allowing only one more run while the next 27 visiting batters were retired. Meanwhile the offense chipped away at the lead, with one run scoring in the first, albeit Upton hitting into a double-play, and Jeff Bailey's solo homer in the seventh.

Ryan Roberts then drove in the third run with a double off the wall in the right-field corner, but was thrown out trying to stretch it into a triple, thereby ending the game - a somewhat pointless decision, given he'd almost certainly have scored on any hit with two outs, if he'd stayed at second-base. That was a somewhat damp squib of a way to end the day, and it was particularly disappointing for an almost full-strength Diamondbacks team to lose to a Giants one without almost all their everyday players, against a starter (Kevin Pucetas) who had an ERA over five in 28 Triple-A starts last year. [Tim Lincecum pitched in a minor-league game in Scottsdale instead; hard to say whether this was to avoid the trip to Tucson, or to avoid facing a divisional rival]

Last week, the DIamondbacks were unbeatable - it seemed they could score runs almost at will. But over the past few days, they've seemed particularly mortal, the offense going stone-cold, and the pitching blowing hot and luke-warm. I wonder if the team will be this streaky during the regular season. Anyway, rather than doing anything more in the way of a traditional recap, I think it's probably best if I just do random notes of things that I noticed over the course of the afternoon, which will reflect the fact that my attention was drifting in a somewhat random fashion on and off the game, depending on what the alternative entertainments were. 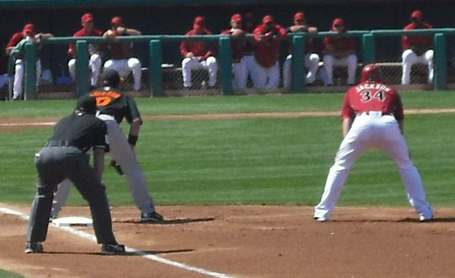 I know there's a certain Cubs fan who will appreciate the shirt. Anyway, thanks again to everyone who showed up and made it a great success, in every way bar the final score. It's been suggested we might try and put something together for an ASU baseball game, probably on a Sunday. We'll work out the details in due course, but it's probably going to be a few weeks before anything happens there. Stay tuned...