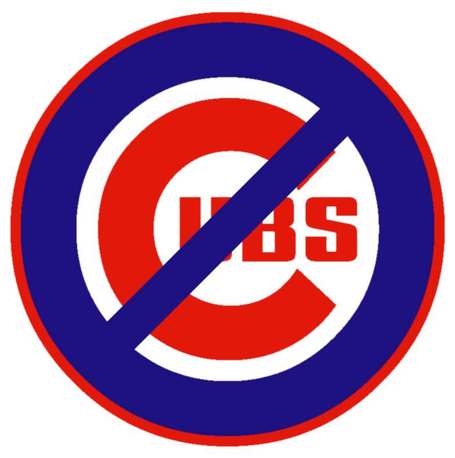 "We would love for the Cubs to stay - just not at the expense of our fans. The other 13 teams in the Cactus League feel the same way."
-- Derrick Hall

Been a while since we've done one of these, and there are a good number of things worth mentioning. There's discussion of a contract extension for Mark Reynolds, Webb feeling better, news of a couple of potentially-interesting events as we head towards next weekend's Fan Fest, Derrick Hall's digestive tract, and a disturbing, if Photoshopped picture of Randy Johnson.

Details of all these can be found after the jump. Warning: if you couldn't tell from the logo on the left, it's probably going to get a bit ranty. Get a coffee and a sandwich, there's a lot to read - and not all about the Cubs!

Details of the plan to finance the Cubs new palace in Mesa have come out. And the plan put forward is, it appears largely to let us baseball fans in Arizona foot the bill. According to a bill introduced in the Arizona Legislature this wee,  $59 million - more than two-thirds of the estimated cost - would be funded by increased taxation statewide, both on car rentals, and a surcharge on all Cactus League tickets. Yes, folks: it's not enough that the Cubs used extortion with menaces to bludgeon the Mesa lackies into this deal, by threatening to move to Florida. But as soon as next season, the tickets you buy to a Diamondbacks-Rockies game at their new, entirely privately-funded complex in Scottsdale, could be helping to pay for the Cubs' new facility.

Ah, but a report - commissioned by Mesa, so in no way likely to be prejudiced or biased, of course - claims that the departure of the Cubs would cost the state "over $137.8 million dollars" and 1,581 jobs. The report, however, does not say how many of those jobs involve serving alcoholic beverage to the Cubs fans. Probably around 1,570 or so. I'm also not quite sure how they leap to the conclusion that Cubs fans alone spend $75 million here annually. Even charitably assuming that every single person in attendance at HoHoKam - avg. attendance last year, 10,690 - would simply evaporate if the Cubs left, that works out at more than $7,000 per fan, purely on in-state spending, excluding things like flights. It doesn't add up.

The study also conveniently forgets how many Cubs fans already live here. As anyone who has been to Chase for their visits can attest, for such a rabid fan-base, it's amusing how many of them abandoned the city they supposedly hold so dear. The report contains no evidence at all on the number of attendees who actually come in from out of state. Nor does it take into consideration those who would come anyway, to see relatives, say, or simply to escape the shitty Chicago weather. The potential loss of a few hundred minimum wage McJobs is hardly good enough reason to start gouging everyone who attends Spring Training.

But even if we accept the questionable numbers here, there is absolutely no justification given for why we should have to pay, in order to keep the Cubs in Mesa. Going by the bevy of suitors for the AZ/COL facility, and if it actually is the cash-cow its proponents claim, there would surely be no shortage of alternative locations elsewhere in Maricopa County. These would a) give the Cubs the new facilities they apparently desperately need, b) keep their fans (and more importantly, their dollars) here in the state of Arizona, and c) not require one cent to come out of the taxpayer's pocket.

For what was the shortfall in our state budget last year? $2.43 billion, projected to rise to $3 billion in 2011. And yet idiots like House leader John McComish are proposing to raise taxes to fund a practice park for a professional sports team, when we can't even keep open our state parks? You can understand why fiscally-responsible franchises are unimpressed. It's almost enough to make me wish I could vote, simply so that I could recall the jackass. And never mind the irony that a team playing in a ballpark which was built before the Great War, regards the 12-year old facilities at HoHoKam as 'outdated'.

Hey, Cubs! Let's make a deal. Prove you deserve public funding, because otherwise you're just acting like a bratty kid, demanding a new car, when their report card is full of D's and F's. So, win the NL pennant. It's not so hard. That's something 14 of the other 15 clubs in the league have done since the last time you managed it - including seven that didn't even exist the last time the Cubs went to the World Series. I'm not even asking you win there (you haven't managed that in the entire lifetime of Arizona as a state, so let's not expect too much), just get to the final showdown  and then we can talk about us funding your shiny new stadium.

And moving on, appropriately, from the Cubs to bleeding ulcers. For club president Derrick Hall made an appearance on local cooking show segment, 12 News Valley Dish last week, and announced that about 18 months ago, he'd been diagnosed with no less than ten of the pesky critters, and had given up eating red meat as a result. Hmmm... 18 months ago? I suspect the cause of the ulcers was perhaps less the diet, than the 52 one-run games in which his team were involved that year. While it's great that he's now healthy, I suspect that more important than forgoing steak, was the decision to trade Jose Valverde at the end of that season. I think this move saved everyone who watched the team a few ulcers...

Is Mark Reynolds going to be the next player the D-backs lock up long-term? He said on Friday that talks are underway: "There are talks. There's years being thrown back and forth right now. No money yet, but it could be anywhere from a two- to three-year deal with a couple of options is what I hear. I think the week of the 15th, there's going to be some formal offers made." Reynolds missed being eligible for arbitration tis year by about a long weekend of service time, so his arb years will be 2011-13. Nick Piecoro doodles numbers on a beer-mat and speculates we could be looking at "a three-year deal in the $14 million-$15 million range." Here's hoping Mark doesn't fall victim to the Curse of the Contract Extension, whose victims include Chris Young, Chad Tracy, Eric Byrnes and Chris Snyder. 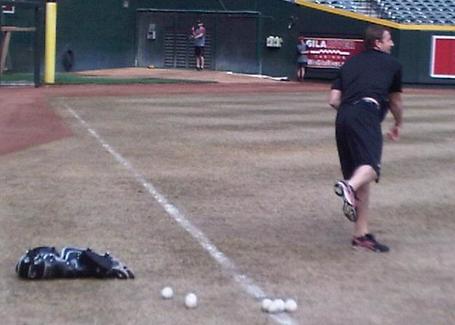 The above pic of Brandon Webb playing long-toss, is courtesy of Steve Gilbert, taken with his Blackberry at yesterday's open practice session at Chase Field. He reports Webb reckons he'll be ready for Opening Day, and also has some other interesting tidbits, such as the off-season arrivals in both the Reynolds and Haren families. Also worth a read is his interview with Ken Kendrick, which by coincidence appeared on the same day as the first part of my discussion with Josh Byrnes, so sheds another bit of light on the Diamondbacks' front-office. In particular, he explained the funding for LaRoche. "We thought it was worth making the stretch and spending the extra money. There were a couple of other possibilities, and we were going to be able to do one of them. The LaRoche thing came, and we liked it, and Josh wanted to do it, so we did."

Nick Piecoro also chips in on Webb, our hopeful #1 telling him yesterday that he's looking forward to the bullpen session on Tuesday - even if it's only going to be five minutes or so in length, he'll be throwing off a mound for the first time in about ten months. "I’m excited to get back on the bump... I’m ready to go... It’s going to be a gradual thing still. Today was really good. I feel like I’m building up every day. I haven’t really thrown for a whole year. Even if somebody didn’t have surgery, if you lay off for a whole year it’s going to take a little bit to get your arm strength back and stuff." He hasn't yet broken out the curveball, but has thrown some change-ups.

FanFest next week, which reminds me, must put in my request for a day off for that. However, it is not the only change for fans to meet major-leaguers this month. The night before FanFest, next Friday, Wild Horse Pass Hotel & Casino are hosting an autograph event inside the Ocotillo Ballroom from 6:00 p.m. to 7:00 p.m. Those taking part will include Mark Reynolds, Miguel Montero, Ian Kennedy, A.J. Hinch and Daron Sutton. There's no admission charge, but you do have to be 21 or over to attend. You can bring one item per person for the participants to sign, but photography will not be permitted

And the Saturday after FanFest (Feb. 20th), the inaugural Spirit of the Game event takes place at Surprise Stadium from 5-8pm. There'll be more than twenty players from 13 clubs present - Diamondbacks, past and present, include Blaine Boyer, Micah Owings, Damion Easley...and Russ Ortiz. I guess the last-named hopes the statute of limitations has expired on his Arizona contract. Instructional clinics will be offered, and  open to kids of all ages and available on a first come, first serve basis. Other activities include autograph stations and a kid’s zone with interactive games . Food will be available for purchase. It's free, but bring a non-perishable food item to be donated to St. Mary’s Food Bank, and you'll have a chance to win one of the door prizes. Bring two, and you'll have something to throw at Russ Ortiz. May I suggest a can of tomatos? Anyway, visit the website for more information.

Fangraphs.com had a couple of interesting pieces. One reviews our 2006-09 drafts, and the other talks about our top 10 prospects - though the latter list deliberately does not include any of the 2009 draft picks, presumably due to the shortage of minor-league data on them. However, that does also leave our farm system looking perilously thin in that report, though they acknowledge that eight of this year's picks could be in the current top ten. And in ex-AZ player news, Yusmeiro Petit was DFA'd by Seattle, as a result of their signing of Erik Bedard.

And, as we are almost approaching 2,000 words for this piece,  I think that just about wra... Ah, you thought I'd forgotten, didn't you? The Seattle Times has a piece where it uses the Sorting Hat from Harry Potter to decide which cap certain players should wear into Cooperstown. It's quite an amusing bit of writing - and also good to see someone from that corner who does agree that Johnson should go into the Hall of Fame as a Diamondback [regardless of him throwing out the first pitch in Seattle on Opening Day] However...I could certainly have done without the Photoshopped atrocity of the Big Unit in a wizard's hat that accompanied the piece. It's gonna take a great deal of mental bleach to wash that image from my mind.

Have a good weekend. Back Monday with the bullpen preview, and Wednesday with part two of the JB interview.