Luis Gonzalez: should we retire his number?

Share All sharing options for: Luis Gonzalez: should we retire his number? 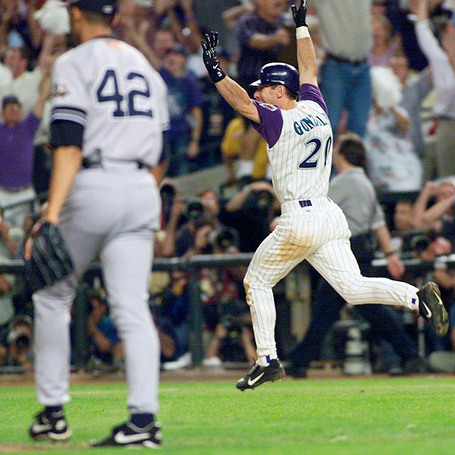 Are we going to see Gonzo's number get retired this year? Seems it's more of a possibility now: as Wailord pointed out in a Fanshot, Derrick Hall said today that the tram is reconsidering their policy of only retiring numbers for players who are in the Hall of Fame. He says, "It's limiting and restrictive for a franchise that is so young and successful. We have some players who deserve consideration for their numbers to be retired, whether or not their names are ever enshrined in the Hall of Fame." It's fairly obvious whose name will be top of that particuylar list: Luis Gonzalez.

It'd certainly be a memorable occasion, especially if combined with the no-doubt retirement of Randy Johnson's #51. After the jump, we'll dig a bit more into this interesting topic, and give the case, both for and against retiring #20.

The case for.
There's no denying Luis's place in team history, he leads the franchise in just about every offensive career category (min. 1500 PAs with the Diamondbacks) - and, in a lot of cases, it's not even close. The chart below shows the categories, together with the numbers posted by the #2 for Arizona.

Most of those records seem secure for the foreseeable future. In games, for example, the current leader on the active roster is Stephen Drew, all the way back at 496 - he'd need to play every day until about the end of May 2014 to catch up with Gonzo. Similarly, Reynolds is about five full years behind Gonzalez in terms of RBI production. Outside those raw numbers, there are what you might call "the intangibles" - not least of which would be some bloop single or other in November 2001... Even though he hit only .246 during that post-season, the memory of him skipping to first-base like a Little Leaguer is indelibly ingrained on the synapses of every Diamondbacks fan.

If you're looking for precedent, there's plenty. Of the nine numbers which have been retired by the Houston Astros [excluding Jackie Robinson's], only one belongs to a player that is currently in the Hall of Fame, Nolan Ryan - though a couple of those in question (Jeff Bagwell and Craig Biggio) are not yet eligible for election to Cooperstown. But that still works out at about one player for every five years of their existence. On that basis, the Diamondbacks retiring two in the first dozen years - for we'd assume Randy Johnson's #51 is not long in usage - isn't excessive.

There have been many, far less deserving candidates who have had this honor. Find a Pirates fan and ask them why manager Billy Meyer - career record 317-452 - had his number retired. Or the Padres' Randy Jones, who went 92-105 for them, with an ERA+ of 104. But as Joe Posnanski points out, there are three kinds of retired jerseys in baseball: the Greatness, the Emotional and the Importance to the Team. Whatever Gonzalez may lack in the first category, he more than makes up for in the second and third areas.

No player in franchise history has been as universally-adored by the Phoenix public as Gonzalez, and for good reason. He was the Dr. Jekyll to Randy Johnson's Mister Hyde: it was as if all the approachability from both players had been condensed into Luis: if this town has had a more fan-friendly athlete, I can't think of him. I don't think I ever heard of any fan who was ever refused an autograph, or treated with less than absolute politeness, regardless of the location or occasion :it was never too much trouble for Luis. While better players may come along in the future, he was the first "face of the franchise," and a better ambassador for the team is hard to imagine.

The case against
Of the other recent expansion franchises, the Rockies and Marlins have yet to retire any of their own player numbers (Florida retired #5 for executive Carl Barger before their first-ever game), while the Rays came in for a lot of derision for their decision to retire Wade Boggs' #12, since he played only two seasons in Tampa. That's the only player number which has been put away on a team founded in the last forty years. Neither the Blue Jays nor the Mariners have done it, though the former do have a 'Level of Excellence' in the Rogers Center, to honor notable individuals in club history. But should the Diamondbacks retire more player numbers than the last five expansion teams put together?

On some other teams, there would be no argument: Gonzalez's number simply would not be eligible to be retired. Take the policy of, say, Boston, which states: "The Red Sox' policy on retiring uniform numbers is based on the following criteria: Election to the National Baseball Hall of Fame, at least 10 years played with the Red Sox [and] finish his career with the club." Gonzalez would be batting 0-for-3 there, if he'd been playing for Boston. Even Curt Schilling, bloody sock and all, wouldn't qualify for that honor, Cooperstown or not. And that's the way it should be. Getting your number retired should be as hard, if not more so, than election to the Hall of Fame.

It's not even as if Gonzalez would be a borderline inductee into the HoF - for example, like Ron Santo, who had his number retired by the Cubs. Luis was a solid player, whose career was elevated by a single monstrous season in 2001 - the only time he finished higher than 18th in the NL Most Valuable Player voting. While there's no denying his his near-impeccable appeal to fans, should this factor into the decision? Will the Diamondbacks, on similar criteria, retire the numbers of Craig Counsell, Augie Ojeda and Trent Oelltjen? But even that aspect was tarnished by an unpleasant spat which led to an unhappy departure - not quite the way players who get their numbers retired are supposed to end their tenure with the team.

And finally, there's the inevitable question, which cannot be ignored. Gonzalez's amazing power surge in 2001 has led to some pointed questions: Luis is the only one of the four men who hit 50 homers that season (Bonds, Sosa, Gonzo, A-Rod) that has not failed a drugs test at some point in their career, according to media reports. While I certainly hope that remains the case, it would be a nightmare scenario for his number to be retired, among huge fanfare, only for evidence to come out down the line which tarnishes his reputation. Derrick Hall had better be very sure there are no skeletons in the closet, before making his decision. It's pretty hard to un-retire a number...