Share All sharing options for: North by North-Fest: The 2010 D-backs Fan Event 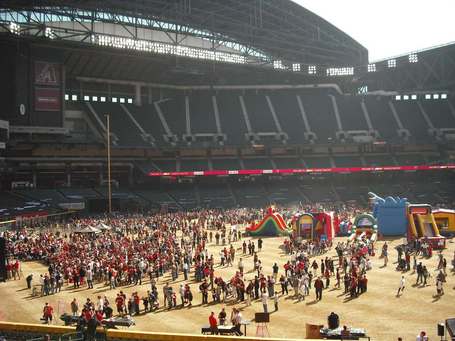 The past week has given me a palpable sense that the season is finally approaching. Fox Sports announced their TV schedule, the team came out with their list of 2010 promotions and, this afternoon at Chase, the annual Fanstravaganza marked another milestone passed on the road to Opening Day. Walking into the concourse, and hearing Bobby Freeman blasting out baseball tunes was like mainlining pure epinephrine, a jolt to the system signaling it was time to wake-up from the winter slumber. Pitchers and catchers report next week, folks! After the jump, there's more details from today's extravaganza. 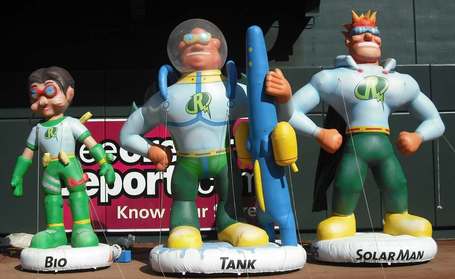 If these are the Struttin' Suttons and Racin' Gracies we were promised,
I am really not  impressed... :-)

Gates opened at ten a.m, though early admission was offered to season-ticket holders and, it seems, people that bought a Subway sandwich, who got a voucher entitling them to a Dan Haren autograph. From what I heard, the line for that was long enough that I suspect Subway will likely have been happier with the results of their promotion than Dan Haren's wrist. My first impression was that there were more people present than last year, though this is clearly utterly unscientific, and a wild stab in the dark.

Mrs. SnakePit had dropped me off, refusing to do anything until she had been properly caffeinated, so headed off with Mrs.Snakepit-in-Law to First Watch to take care of that particular need. This freed me up to start browsing the Yard Sale, a popular haunt, as in previous years, due mostly to the "weird stuff" you could pick up there. A lot of this was related to players who were no longer with the team - my heart still gave a token nod towards my boots on seeing the Carlos Quentin bobbleheads - but there was also a large selection of D-backs game-used caps, from both spring training and the regular season, available at the very reasonable price of $10-15. [Heck, that's what you'd pay for a new cap] 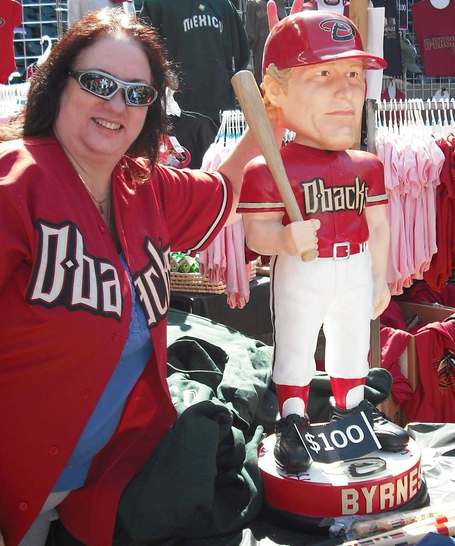 Mrs. SnakePit tries to decide if our cat needs a new scratching post.

It was a question of going through the available selection, trying to find someone whose a) hat you wouldn't mind wearing, and b) head was about the same size as yours, for these were not adjustable. I finally settled on an authentic Chris Young hat, complete with authentic Chris Young perspiration encrusted underneath it's bill. So, if anything happens to the real Chris Young, we can clone another Chris Young from the DNA I now possess. [And if genetic science has progressed to the point where we can eliminate the infield pop-ups, so much the better] At least, I hoped it was the Chris Young: all it said was "Young" with the number #24, so I spent most of my time in the queue to pay, trying to work out if there was some non-roster call-up called Young that I'd forgotten about.

Other cool stuff acquired included Juan Cruz's locker name tag, and the official line-up card for last year's came between the Diamondbacks and Rangers at Chase on June 25. That was the longest home game of the season for Arizona, as we fell 9-8 to Texas in twelve innings. That was in part because of three D-backs errors, leading to two unearned runs, but Mark Reynolds went yard, hitting home-runs #20 and #21. Somehow, that defeat felt like an appropriate summary of the 2009 season as a whole. It took about twenty-five minutes to check-out, thanks to me having forgotten last year's lesson and not remembered to bring cash, so being condemned to the credit-card line. 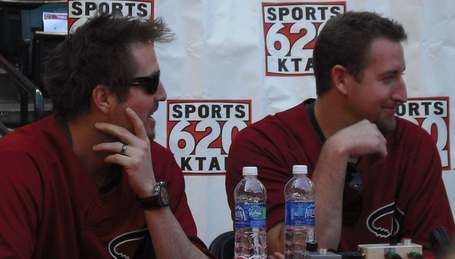 By the time I escaped, Mrs. SnakePit had returned, and had been kind enough to bring me an omelette, so we sat in the stands for a bit, while I munched on this. Bumped into qudjy1 from DBBP while we were there, one of several familiar or new faces encountered over the course of the day. Dirtygary was also met, as was our ticket guru Mike Dellosa, and KTAR's Tyler Bassett - the SnakePit jersey did its job there, attracting his attention. Fortified by cholesterol and caffeine, we headed back down to the park, and meandered about for a while. There were various panels going on, with players, coaches, commentators and front-office staff being quizzed on all aspects of the team, but tempting though those were, we preferred to keep circulating.

There was certainly no shortage of things for fans to do, with the "spin a wheel and maybe win something" stalls being particularly favored with long queues. Hey, something for nothing appeals to all of us, though the one I watched for a moment.I must admit, I noticed there appeared to be significantly weighted not to go to the good stuff. Fox Sports Arizona were again doing their Be a Fan promo shoots, inviting families to yell, scream, and act like complete lunatics in front of a green screen, to be used in adverts for the upcoming season. Of course, you'd never catch us doing anything like that. 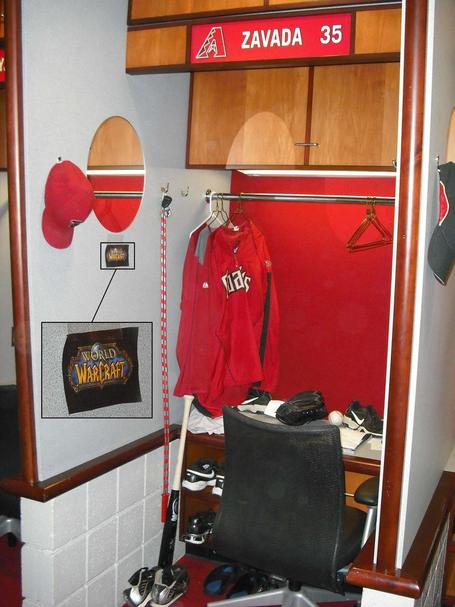 Finally, we went on a quick tour through the Diamondbacks locker-room, joining a line which snaked through the dugout seats, down past the Sedona Club (noting the groundskeeper's room on the way) , and round via the batting cages into the holy of holies. It's always fascinating to peer at the player's lockers and try to work out from the contents what they say about their owner's personality. However, our Holmesian deductions needed to be tempered with caution.  For instance, is the picture of a half-naked man taped above Blaine Boyer's space significant, or some team-mate's idea of a joke, knowing ten thousand fans would be filing past said picture, and wondering? Dan Haren: card-carrying Republican or not? Why does Miguel Montero - shoe-size 10 1/2, apparently - have a Chris Snyder bobblehead in his space? And Chad Qualls bobblers of both Augie Ojeda and Brad Lidge in his locker?

We pondered such mysteries as we left the dugout and made our way up the steps from the park to the concourse once again - to the inexpressable non-delight of Mrs. SnakePit-in-Law, whose 80-year old knees were unimpressed by the lack of elevators. Time to go home, clearly. So, we departed, clutching the day's acquired goodies and with a sense that the 2010 season is now virtually upon us... What? It's still another seven weeks until Opening Day? Curses. Oh, well: like I said, pitchers and catchers report on Friday! 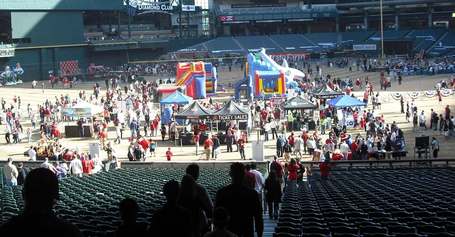