Share All sharing options for: Winners and Losers, compared to last year 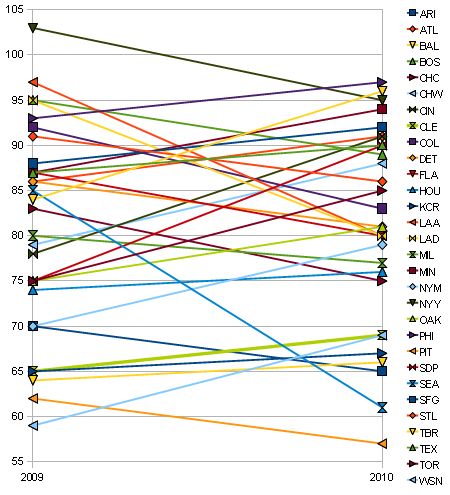 The chart above shows the number of wins obtained by each team in the majors last season and this, giving a nice visual representation of which teams did better or worse over the course of the year. More thoughts - and what it means for the 2011 Diamondbacks - after the jump.

Between Seattle and the two LA teams, not a good year on the West coast, save for the Padres. In particular, the AL West as a whole managed 32 less victories than last season; the NL West were at -10 overall. Somewhat surprised to see the Rockies among the biggest losers, but it was the brutal final stretch ("Sucktober") which sunk them - after 148 games, they were only one behind last season's pace, then they lost 13 of their last 14. It also says a lot about the Yankees' total domination in the NL East last year, that they can appear on the "biggest loser" lists and still make the post-season.

This chart shows what a tough job the D-backs are going to have in 2011. If they were to match the best turnaround in the majors this season, that would only take them to 82 wins, likely well out of contention, even for the wild-card - this year, the Padres won 90, and are now sitting at home. It's also worth noting that all the teams below 70 wins in 2009...were also below 70 wins in 2010. Chalk up more reasons why we should keep our expectations lowered for next year, taking all pronouncements from management to the contrary, with a pinch of salt.