Typically, when you realize halfway through a game that you have to recap it, there'd be a scrambling to the various news outlets and such to catch up on everything that went down. Though, when I flipped on FSN West in the bottom half of the fifth inning, I apparently hadn't missed a lot: Joe Saunders had held the Dodgers scoreless, and more interestingly, Chad Billingsley had held the Diamondbacks hitless (a single walk separating him and a perfecto). Though, such are the magical ways of myself baseball, the first Diamondback I had the privilege of seeing at the plate - God-emperor of Suck Gerardo Parra - singled to left, breaking up the last hopes of a Dodger no-no.

That's really the only highlight you need. Like, the entire recap could be "we were no-hit for five, then we got a hit, then we lost". But there's no fun in that, is there? Of course not. Details of the lead-up to the season finale after the jump (and you'll get to see me say it's my last recap... again).

How much would you really like to know about the first five innings, in which the Dodgers managed six hits against Joe Saunders, and Arizona managed none? The Dodgers threatened in the first, putting runners on the corners with two down, but a backwards-k from Casey Blake put the flame out on the scoring opp. Rod Barajas singled in the second (and never advanced), Theriot singled and later made it to third in the following inning (nothing became of it), and Reed Johnson doubled in the fourth (the score remained zero). LA can't complain about not getting any chances to score - they had a runner in scoring position in each of the first four innings, yet pulled an Arizona in each frame, putting up a goose egg to show for it. As I couldn't watch the game, I'm not at liberty to make the call as to whether the Dodgers simply couldn't do anything when they had the shot, or if Saunders just shut them down when he needed to. Going by my gut instinct, I'm gonna say it was the first thing.

If you were wondering why I was so strictly adhering to those first 4½ innings - ones that should be the worst of the night, as we were held hitless - it's because they were, in fact, the only innings in which we weren't trailing. After Saunders struck out Chad Billingsley on a foul tip in the bottom of the fifth, Los Angeles finally got to Saunders, as an Andre Ethier single set up Matt Kemp (who had been greenlighted on 3-0 by guest manager Jamey Carroll) to drill a two-run blast to left, putting the Dodgers up two runs (two runs that would prove to be huge later). James Loney grounded out to put an end to the inning, but the damage had already been done. Some nights a two-run deficit wouldn't even deserve a scoff, as the offense would be rolling on all cylinders; this was one of those Arizona dark days where the offense sucked. Gerardo Parra did come through, as I said earlier, in the top half of the sixth, singling past a diving Chin-lung Hu to break up Chad Billingsley's attempt at his first career no-hitter, so at least we have that to be happy about. Needless to say, Parra was stranded, as Joe Saunders, Stephen Drew, and Tony Abreu were set down in order by Billingsley to maintain the LA lead.

The Dodgers tacked on another in the sixth, when Rod Barajas hit a ball to Chris Young that CY simply couldn't handle; it wasn't a particularly difficult catch to make, but he moved far enough that he couldn't set up how I'd imagine he wanted to. It bounced off of his glove and rolled a few away from him, enabling Rod Barajas to leg out a three bagger (at Dodger Stadium, not Coors Field, so an error was ruled on the play). A routing flyout from Reed Johnson scored a tagging Barajas, putting LA up 3-0. We made a game of it in the bottom half of the eighth on a single from Brandon Allen, who moved to second on a hit-by-pitch from Ryan Church (following a Gerardo Parra strikeout). Droo scored Allen from second with a single of his own, moving Church to third and ending Billingsley's night in the process. Abreu sacrificed to left to make it a one-run game, but a strikeout from Kelly Johnson quashed the threat. It proved to be our last hope, too, as Adam LaRoche was the only one to manage a hit in the ninth (a single to center), sending us into the final game of the season. Any surprise that all three of our final outs were on K's? 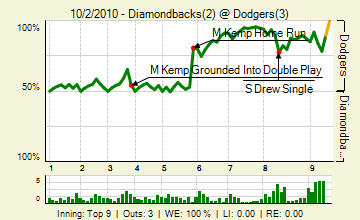 You can tell from the win expectancies that it was pretty much an ugly night all-around, especially considering that our second-highest player WPA-wise stole a base and did nothing more. The moderately-active GDT tonight was mostly padded by non-baseball comments (a rarity when Jim is in attendance. Justin1985 led the way with 85 comments, with DbacksSkins reversing it in second, tallying just 58. Also in on the conversation: kishi, Jim McLennan, snakecharmer, Azreous, hotclaws, Clefo, 4 Corners Fan, Rockkstarr12, morineko, brian custer, and xmet. Comment of the Night goes to morineko for her observation during a discussion about Aaron Heilman:

I'm honestly not being sarcastic

the Diamondbacks bullpen: where aesthetic appreciation is the only thing it’s got going for it

So, I swear this is my last recap of the season, barring any sort of extraordinary circumstance tomorrow; we'll head into Game #162 looking to end the season with series victory against the Dodgers. As far as I know, this is the final recap for any of the Pit writers, as unnameddbacksfan picks up the recapping pen to cap off the season. And, hey, don't look now, but if the Orioles win tomorrow (or we lose), we've got the #3 pick locked up. TankapaloozaWIN?