The Diamondbacks offense provided him with plenty of run support, but it wouldn't be a game in Los Angeles without an Esmerling Vasquez meltdown. More details of the win (yes, really) after the jump.

Things started of well for Arizona. Back-to-back doubles by Stephen Drew and Chris Young gave the Diamondbacks an early 1-0 lead against John Ely, and Kelly Johnson singled to make it 2-0. After LaRoche ground into a double play and Mark Reynolds struck out for the 17,842nd time (or maybe it was only 209th), Zach Kroenke went to work with a lead.

In his two relief appearances with the Diamondbacks this month, Kroenke had terrible outings, but his ERA from AAA was a solid 3.51. Which pitcher would show up tonight in Chavez Ravine? The GOOD Kroenke, the one we've heard is a strong pitching prospect. Kroenke allowed only one hit and one walk until he gave up Matt Kemp's solo home run in the 4th inning. But he didn't let that bother him; he struck out James Loney after that. A second walk "helped" Kroenke get a double play in the 5th inning, and a liner to Johnson ended his night. Five of his outs were on fly balls, and he had great the infielders on their toes and turning in some great defensive plays behind him. The final line for Kroenke's first major league start looked like this: 5 innings, 2 hits, 1 run, 2 walks, and 1 strikeout on 71 pitches. His ERA is now 6.75; only 31% of what it was to start the day.

The Diamondbacks had extended their lead to 5-0 with a three-run 3rd inning. Adam LaRoche barely missed a home run to right field to drive in Chris Young (he'd walked and stolen second base, his 28th of the year). Mark Reynolds got a "Texas leaguer" single to right to snap an 0-for-19 streak dating back to September 19th in Pittsburgh; and Brandon Allen's sacrifice fly scored LaRoche (although had the throw gone home and not been cut off, he may have been out). In the 5th inning, LaRoche hit a 2-run home run to right to reach 100 RBIs. (If you weren't watching on TV, you should know Tom Candiotti totally called this.) That extends LaRoche's career high in RBIs (his previous high was 90 in 2006), and he becomes the first Diamondback 1st baseman to reach triple digits. He received a little water poured on his head in the dugout in celebration, the Diamondbacks had a 7-1 lead, and John Ely was out of the game.

Kroenke would earn the "W" to go next to that nice line of his, but not without some drama. Because what else would you expect letting the bullpen pitch for 4 innings? Esmerling Vasquez came in and started the 6th inning. Daron Sutton pointed out he just needed to throw strikes. And yet he couldn't do it. He walked Ryan Theriot and Casey Blake, allowed a single to Andre Ethier, and then hit Matt Kemp with the bases loaded to force in a run. (It was the 6th time a Diamondback pitcher has hit the batter with the bases loaded; not surprisingly, this leads the major leagues.) Vasquez threw 13 pitches to 4 batters, and only 3 of them were strikes. Carlos Rosa came in and gave up a single to James Loney and a sacrifice fly (thanks to a beautiful running catch by Young) to Rod Barajas, and the 6th inning ended with the Dodgers back in "grand slam" range.

Sam Demel did only a little better in his inning of work, the 7th. He hit the first batter he faced, and then a fielder's choice, walk, and a wild pitch put runners on 2nd and 3rd with one out. Ethier ground out to score the runner Reed Johnson to cut the lead to 7-5, but Demel struck out Kemp to end the inning. Aaron Heilman showed the young kids how it's done with a 1-2-3 8th inning, and then it was Gut Check time in the 9th inning with Juan Gutierrez in for the save. Daron was giving us good numbers to open the frame - he's 13/13 saves in his last 35 appearances with a 2.54 ERA. Indeed, he was pretty solid again tonight; he only walked Theriot after two relatively easy outs, and then Casey Blake struck out to end the game.

Notes: The Diamondbacks passed 1,500 strikeouts for the season when Stephen Drew struck out against George Sherrill in the 7th inning; Gerardo Parra was the only starting position player with an oh-fer line (0-for-4); Konrad Schmidt, also in his first major league start, got his first hit, a single, in the 2nd inning. 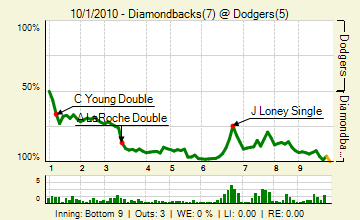 It was a very quiet gameday thread tonight. What, do people have lives with activities that force them to leave the house on a Friday night?? It was so quiet that I led the comments, although I didn't get to 100. Jack Cromwell returned and made it to 2nd place, and hotclaws came in 3rd. There were only 15 of us tonight: snakecharmer, Jim McLennan, Rockkstarr12, frubio, Bcawz, kishi, hotclaws, asteroid, Azreous, themysticalone, 4 Corners Fan, Jack Cromwell, blue bulldog, zzzzzzz, and Muu and his vuvuzela.

There were several worthy candidates for Comment of the Day, including one about Trent Oeltjen........ sorry, was off in dreamland momentarily... anyway, I chose this one by hotclaws:

A rather tumultuous game for my last recap of the season, but happy to have a win. 'Tis not my last story of the year, no way - check in on Monday for a nice treat. No TV tomorrow as Saunders heads to the hill against Chad Billingsly, but check out Greg Schulte and Candi on KTAR 620 tomorrow at 7pm.