Share All sharing options for: Diamondbacks 4, Dodgers 5: The Eighth Inning

The Diamondbacks got to Chad Billingsley early, scoring three times in the first two innings but it was the eighth inning that did the D'Backs in again. A very impressive game by Billy Buckner was wasted and the team has now lost six consecutive games to fellow West rivals Colorado and Los Angeles. If you want them, (and I strongly encourage you to think about this before you delve into it) details are after the bounce.

If you're a tl;dr kind of guy then here you go:

I had a hard time figuring out how to start this recap. In fact I even took a spaghetti break to try and help ease in ideas. Simply put, this game needs no introduction. It needs no description. It needs no recap. We've seen this happen enough times this year that we can probably make a pretty educated guess as to how we lost this game. A quick glance at the box score and WHAM, our brains immediately process the play-by-play from the eighth inning on. Here it is though, here is game #140.

Both teams started the game with a spark. Los Angeles scored a run on an Andre Ethier double while the D'Backs scored two runs on back-to-back sacrifice fly's by Justin Upton and Mark Reynolds. Then a little bit of fundamental baseball showed up in the second, something the D'Backs haven't had much luck with this year. A leadoff double by Brandon Allen and a productive groundout by Augie Ojeda and we were in business again. Billy Buckner decided to break the trend of sacrifice fly's and hit a groundball single to score the third run. We left the inning with a 3-1 lead along the warm fuzzy feeling you get when your pitcher brings in the first RBI hit of the game. Another note to take down from the second inning was the double play of Russell Martin and Orlando Hudson. Why is it worth mentioning? It marked the first of five double plays dished by D'Back infielders, tying a franchise record.

You can draw a line from there to the bottom of the sixth as neither team managed to get much going. There were four double plays between the two teams and only one hit for each squad. Back-to-back doubles by Augie Ojeda and, you guessed it, Billy Buckner broke the drought in the sixth inning and the D'Backs grabbed a 4-1 lead heading into the top of the seventh. Buckner wasted no time returning to the mound and capped off the seventh with the fifth double play of the game for Arizona. Optimism was at its peak. Eyes were as glossy as ever. Hopes were... hopeful.

Then it happened - the dreaded eighth inning:

It all comes crashing down so suddenly. It's abrupt, it's maddening, it's mind-boggling and error inducing, it's the eighth inning. Orlando Hudson showed some Arizona pride and accounted for two of the outs in the inning. In fact, Hudson's feat is all that there is to talk about when referring to something positive about the inning. The meltdown and the errors, it's all too familiar to us.

Gerardo Parra hit a two out single in the bottom of the ninth to give us all one last glimmer of hope. Justin Upton came into the box representing the winning run but could only muster a groundball to the pitcher. As was stated in the introduction, the team has now lost six consecutive games and is now in last place once again. That's right, our record is worse than the San Diego Padres. Rough stuff. 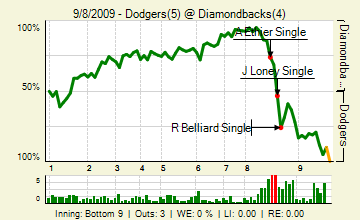 No surprise on the graph. Just your common case of a 95.3% win expectancy blown.


An iiinnnssaanne Gameday thread tonight with over 1,500 comments. Jim will have to tell us where that ranks in Snakepit history. 'Skins reclaimed his spot as alpha dog with 213 posts. Not far behind him was dima1109 who finished just ten posts shy of a tie with 203. skoormit takes the final platform spot and is the only other user with a triple digit post count. Others present were, pierzynskirules, katers, mrssoco, kishi, 4 Corners Fan, soco, snakecharmer, Azreous, pygalgia, SaveUsY2J, hotclaws, emilylovesthedbacks, NASCARbernet, Wailord, RockiesMagicNumber, Jim McLennan, TuLoRocks2008, ShadowPenguin, Duncan1800, txzona, befizzle, Turambar, and the always nice visit from victor frankenstein.

We look to try and break the losing streak as another thunderstorm passes through the city. We get to see our old friend Jon Garland (9-11, 4.23) once again as he squares off against Dan Haren (13-8, 2.78). Arizona had won six of seven prior to its loss to Garland, but hasn’t won since. For all of you out of towners, this one will be on ESPN so get your gear ready and make sure to tune in at 7:10.