Diamondbacks 2, Dodgers 7: Another day, another defeat

Share All sharing options for: Diamondbacks 2, Dodgers 7: Another day, another defeat

If you'd told me before the game started that Mandy would get ejected from the game in the third inning, I'd probably have taken that as a good omen for today's contest. However, a little more thought would have had me realize that it probably wasn't a good thing, as the only way this could happen is if the Dodgers had previously sent 12 men to the plate - if that's happening in the third inning... Not so good. And this was indeed the case: the Dodgers were already 3-0 up at that point, and the Diamondbacks never got closer than two runs behind the rest of the way, though the score was padded against the B-bullpen.

Still, seeing Her Dreadlocked Highness get her ass handed to her by the home-plate umpire was fun - It seems to happen almost on a monthly cycle. Hmm... We should perhaps check and see if there's a delivery to the Dodgers' hotel tonight of a quart of Ben and Jerry's and a copy of Made of Honor. Pre-menstrual details after the jump.

Five defeats in a row for Arizona, outscored 33-14 in that time, and having gone 3-for-34 with runners in scoring position in those five games. We're not pitching, we're not hitting, and we're not even capable of running the bases without the Benny Hill theme starting up. Witness today's amusing little disaster, summed up in the box-score as, "J Upton grounded into a fielder's choice double play, shortstop to third to second to first, S Drew out at third, J Upton out at second." Yes: we manage to ground into a double-play, even without a runner on first, thanks to Stephen Drew going on contact and Upton getting caught rounding first too far. Yuk.

When you start off with the above, which ended the first inning, you might as well reach for the alcoholic beverage of your choice, because it's clearly going to be a long day. Those of us at work... Well, let's just say, it's amazin what you can hide in a 32oz. Thirstbuster or travel coffee-mug. Just remember not to exhale anywhere near your boss. Certainly, some kind of analgesic was necessary to numb the pain of this one. And it skidded further downhill immediately, as Ramirez and Loney went yard back-to-back to open the visitors' second - another run was added before the frame was over.

Further suckage ensued in our half of the second, with Mark Reynolds being thrown out trying to steal second-base - that makes him 0-2 in September, and he's going to have to do a lot better if he wants to reach thirty. The gloom lifted slightly in the third, with Mandy taking exception to a pitch against him being called a strike by home-plate umpire Doug Eddings, saying "I told him I thought it was a ball. Then I threw my helmet, and he threw me out. It's OK. He's human. He's not a machine." How very kind of you, Mr. Ramirez. I'm sure Doug will sleep better for knowing that.

Yet another homer followed for the Dodgers in the fourth, and the Chase Field crowd started a chant aimed at Max: "Are you Petit in disguise?" Well, actually, they didn't, but could hardly be blamed if they did so. Furcal managed to bunt for a clean double, leading off the LA fifth, sending it over the head of the onrushing Reynolds, but was held there thanks in part to Max Scherzer's butt, which blocked a liner back up the middle. Things then got about as good as they were going to get in the fourth, as Chris Young unleashed another home-run, a two-run shot, the day after becoming the first man ever to hit three in a game while batting below .200 [with 300+ PAs].

Scherzer ended up going seven innings, a feat which seemed pretty unlikely early on in the game. Obviously not a quality start, with four runs allowed, but his first-pitch strike rate was up at 66%, and he only walked one while scattering seven hits. He only struck out three, his lowest number since June and third-lowest of the season - on the other hand, it is the first time in his career that he has gone seven or more innings in consecutive games. I think he may be eased off down the stretch, with word of him being skipped for his last start entirely. Certainly, no point overtaxing anyone, be it Scherzer, Dan Haren or anyone else.

It all got a bit tense in the fourth inning. Scherzer hit Russell Martin with a pitch on the left shoulder: some discussion ensued as to whether this might have been retaliation for showboating on an earlier Dodger homer, or for pitches up and in to Reynolds. Both benches were officially warned, and Martin and Scherzer exchanged words as the former was escorted to first by the home-plate umpire. They exchanged words after the end of the inning too, but in post-game comments, both seemed conciliatory, Martin saying, "Looking at his body language, I don't think he tried to hit me. But it still hurt." Fair enough.

Seemed a bit of a curious decision to make Zavada the first man out of the bullpen and send him in for the eighth, since he pitched two innings as recently as Saturday - admittedly, we burned more arms in yesterday's Coors incinerator than a mortuary technician probably gets through in a month. A single, two stolen bases and a walk followed; Bryan Augenstein returned, slotting easily into the role expected by a Diamondbacks reliever, allowing both inherited runners to score. Juan Gutierrez allowed a run in the ninth with the help of another LA stolen-base.

Two hits for Drew, a pair for Gerardo Parra. Young's home-run was somewhat undone by his other three at-bats, so he is still just below .200. He is, however, now ahead of Brandon Allen, who has had three hits in his last 30 at-bats - although all of them are for extra-bases, and two of them have left the park. Allen's season, and indeed, career average is down to .196. I know the Reno effect inflates numbers there a good deal, but at this point, after Josh Whitesell, Trent Oeltjen and now, apparently, Allen, we may simply have to start halving the batting averages there, to get a major-league equivalent. 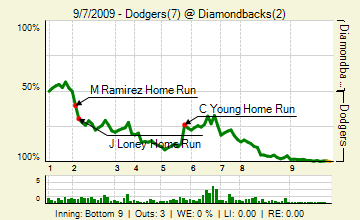 I'm tempted to declare a mis-trial for this afternoon's Gameday Thread, given the amount of utterly shameless post-count padding that went on. Really. You people. Still, especially today, labor deserves to be recognized, and on that basis, all hail dimah1109, who pipped Wailord 385-357. Yes, you read that right: over 740 comments between the two of them alone. 'Skins was (a very long way) back in third. Also present, and deserving credit for showing up in the teeth of the tidal wave, were sayheyupton, RockiesMagicNumber, pygalgia, hotclaws, victor frankenstein, ZonaBacks10, txzona, Diamondhacks, snakecharmer, kishi, IHateSouthBend, NASCARbernet, jazzbo13, katers, 4 Corners Fan, Giannaros, Tripon, edbigghead, befizzle and pierzynskirules. Combined, they were responsible for less than either of the top two.

Something that might have been lost in the thread, but worth mentioning. With their defeat today, the Pittsburgh Pirates have now guaranteed themselves a seventeenth consecutive losing season. And it hasn't even been close of late - the last time they had more than 75 wins was a decade ago. Think about that one the next time you bemoan the fate of our team this season...