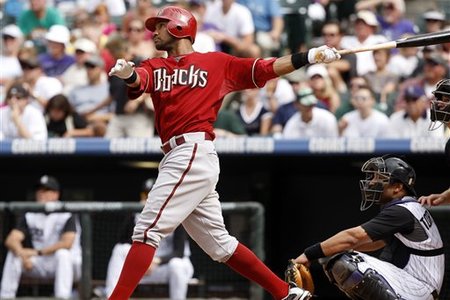 Chris Young suddenly remembers how to hit. "OOOOH! So THAT'S how you do it."
CY later remarked that he felt like he'd been living in a dream this entire season.

In what seems to be only fitting for a Diamondbacks blog, I was seemingly called up to guest recap (alright, so I offered- big deal) and I can surely say that I own the title for the youngest recapper evar. Any criticism will be met with that as an excuse, so please, be prepared. Anyway, I'll get on to the recap of a game that was definitely forgettable (in multiple ways), but showed promise for a certain sub-Mendozan centerfielder… details after the jump (oh, I feel so cool typing that!)…

Another Petit start, another game lost earlier than it should have been. On days in which he pitches, it's really sort of a flip of a coin; you're either going to see a nice, quality start, or a start that makes you wonder why he continues to pitch every fifth day. This, quite clearly, was the latter, as Petit turned in an outing that was obviously done to make up for the previous un-Petitish three that he has thrown. It seems every inning had something that needs to be recounted, so excuse me for that I used.

I will give him credit when it's due. Yusmeiro was nice enough to meltdown earlier in the game, so as to allow me to get started on this recap earlier in the game and not be so focused on such a close game. The game began pretty well for Arizona, despite not getting a hit- after a leadoff popup by RyRo, Byrnes walked and later stole after an Upton flyout. Mark then walked, bringing up Rusty Ryal with runners on first and second. De La Rosa delivered a pitch that got by Rockies catcher Ian Stewart, advancing both Byrnsie and Mark- of course, being the Diamondbacks, Ryal fouled the next pitch off and managed whiff at strike three, ending the inning and stranding two runners.

The real fun, though, began in the bottom of the first. The Petit Unit started the game by walking leadoff man Carlos Gonzalez on four pitches, then getting ahead on the next batter, Seth Smith, 0-2. Smith, however, would have none of it, taking the next slider for a ball and taking the next pitch he saw into the right field stands, giving Colorado a 2-0 lead. But hey, why stop there? After falling behind Giami 3-0, Petit got him to ground out to first and struck out Troy Toolowitzki looking (the lone highlight of the first inning) on a fastball that may have been a bit low. Looks like the USS Petit has been righted, right? No, not really. Yusmeiro walked Brad Hawpe on five pitches, bringing up Ian Stewart, he of the 21 home runs, and after seeing a fastball down the gut, he of the 22. After a Torrealba strike out, Petit finished the inning, giving up a very Petit-esque four runs on two dingers.

The second inning went much quicker, and had a very promising sign for Arizona. Since returning the Majors, Chris Young had been 1-17 (a .058 BA) in five games back. In the previous two games against Colorado, Young had gone 3-8 (which is still a clear improvement) and began today's game by sending a full-count fastball over the left field fence for his eighth homer of the year. Could CY be turning the corner? Only time will tell, but we can only hope. In the bottom hall of the inning, Petit struck out the side, but not before allowing a two-out single to CarGo. Maybe the USS Petit had righted its path *this* time…

The Diamondbacks had a relatively quiet third inning that was marked by not something that happened, but rather by something that didn't happen. Upton smashed a two-out fastball to the deepest part in left-center, a ball that could have very well left the park if it had a little more on it. Regardless, it was an easy extra-base hit… if Upton ran. Assuming that he had secured his 23rd shot of the year, Upton jogged towards first. Immediately after realizing the ball had, in fact, stayed in the park, he very carelessly jogged back to first. No thought at even stretching it into a double, a clearly disappointed Justin took a guaranteed double and made it into a single due to a simple lack of effort. He was stranded by a Reynolds K, and AJ made it clear that no player, regardless of talent, can give a half-hearted effort for Arizona and expect to play. Alex Romero subbed in right and Upton was pulled.

Petit continued to do terrible, walking two and allowing a two-run double by Yorvit Torrealba., bringing the Rockies lead to 6-1. He finished what would be his last inning with a very Petit-worthy 3IP, 4H, 4BB, a surprising 6K's, all with the cherry on top of 2HR. One would begin to wonder how much longer he'll be starting for this team, regardless of our position in the division. Even hovering around 20 games back, we'd like to stay competitive, and even if we can't, at least give some of our other hurlers some playing time.

The fourth was quiet for Arizona and began the onslaught of pitchers; Mulvey came in for only his second appearance as a Diamondback and promptly gave up a shot to CarGo. The rest of the inning went smoothly, however, as Mulvey is still learning the ropes. Colorado managed to walk the bases loaded, but true Diamondbacks fans would know that it doesn't mean anything, as Ryal grounded out to second on a FC to show that we don't know how to hit with RISP. Mulvey pitched through the next inning much better, allowing only a walk in its duration.

The main highlight of the sixth was Young's second homer of the day, this time off of Juan Rincon. Yes, Chris Young, he of the sub-.200 batting average, managed to bring himself up to 2-2 on the day with two jacks, a very promising sign that could show that, hey, maybe that contract may be worth it at some point. Aside from that, the inning was quiet, and Stink Jr. came in to pitch the sixth, something he did very respectably, setting down the side with only a walk against him. Two more Diamondbacks walked in the seventh, but Brandon Allen pinch-hit for Ryal and K'd, yet again, stranding runners at first and second.

Daniel Cabrera appeared for his first time as a Diamondback, replacing Mulvey to face the middle of the order. To make it clear, I'll just let the p-b-p summarize it: walk, walk, RBI double, single, HBP. Quite deservingly, Cabrera was yanked and Rosales entered the game, who let Official Snake-Murderer Seth Smith bomb one into right for two runs, then allowing Omar Quintanilla, pinch-hitting for Toolo, to nab a ground-rule double. CarGo and Hawpe flew out to stop the bleeding, but regardless, Colorado batted around, and we trailed 13-2.

Who cares, though? Mark Reynolds eHero-in-Training Chris Young promptly began the eighth with … yes, another home run. At that point, he was 3-3 with 3HR on the day, scoring all of Arizona'a runs. The rest of the order went down, but you really just have to look for bright spots at this point. CY's tenth jack of the year. Stat courtesy of Jim, CY matched his home run total from the previous three months and 202 plate appearances since June 6th. After Tracy was hit and took second, RyRo managed to actually get a hit with RISP, which is no small feat for these Diamondbacks. EB struck out to end the inning, going 0-3 on the day with two walks, a flyout, a groundout, and a K. The bottom half was fairly silent, after Rosales gave up a single, double play, single, and eventually a flyout to Ianetta. The ninth trudged on, with Young due up fourth… Romero flew out, but The Sheriff decided to send #41 into the outfield, allowing CY to bat. In a very drama-laden at bat, Young took a 3-2 pitch inside to get on for the fifth time, finishing his day. Hester promptly K'd, ending the game.

A very, very strange game overall; a combined 20 walks between the two teams and our bullpen finishing with 5IP, 13ER, 6BB, and all of 3K's- that's an ERA of 23.4, and Cabrera, managing to give up 5ER without getting an out, took second in Arizona history for the worst relief appearance… ever. Mark hit #41. Most importantly, though, was Chris Young's fantastic return. As I said earlier, he began 1-17 since returning from AAA; in the first two games against Colorado, he went 3-8; however, he had a career game today, going 3-3 with 3HR and 2 walks, managing to reach base all five times he was up. It definitely makes one think that his time is now and that he may in fact return to the CY of old with many improvements. We can only hope. We went 1-8 with RISP, continuing our terrible streak, but the bats aren't to blame tonight. 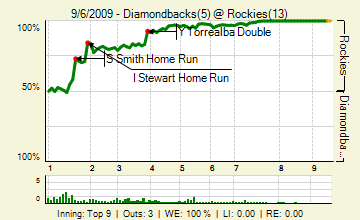 A fairly active (and seemingly flame-riddled) GDT, with who-else-but-'Skins, the only one to break triple digits, followed by SaveUsY2J, friendly visiting fan RockiesMagicNumber, and 'Charmer. Total roll call included SaveUsY2J, pygalgia, kishi, snakecharmer, Jim McLennan, hotclaws, njjohn, unnamedDBacksfan, RockiesMagicNumber, DbacksSkins, ELGee, 4 Corners Fan, Clefo, Diamondhacks, eel, Wailord, edbigghead, katers, NASCARbernet, and txzona; nearly 620 comments were tallied. You guys can bet that I'd be up there, had I not been posed with the task of taking a game with so many things to be talked about and keep it below 100,000 words. Definitely had fun writing this extremely-long recap, and hope to do it in the future sometimes… most attention I've paid to any baseball game in a long while. We begin a three-game set with the Dodgers tomorrow with the most intriguing matchup of the three being the finale: Garland vs Haren. With that, I'm off to do some shopping. I appreciate the opportunity to do this, Jim & Co., and while it may not be up to normal standards (I gotta get this pithiness thing down), I still enjoyed it all. See you all there (well, here)!