Share All sharing options for: Diamondbacks 1, Rockies 4: The Loss That Didn't Exist

There was a game in Colorado today. The Arizona Diamondbacks got some hits. The Colorado Rockies got some too. Runs were scored. Batters struck out. And I'm fairly sure there was a Chris Young pop-up in there as well. However, it's kinda hard to get up any enthusiasm when your side goes 2-0 down as your starter retires his first batter, and the game isn't even on TV. Somehow, rushing home to boot up ESPN Gamecast hasn't got quite the same appeal. Hence, dinner was accompanied by Police Women of Broward County (above).

Somehow, I will cobble together something approximating the form of a shape after the jump. Or I'll just copy and paste the AP report, and see if anyone notices. I might add a pop-culture reference or two, because AP seems oblivious to the fact that sports reporting is much improved by South Park jokes...

So, we can't beat Colorado when they outhit us and, looking at tonight's box-score, we can beat Colorado when we outhit them. For the Diamondbacks actually had one more hit than the Rockies, but our only score came courtesy of Brandon Allen, who homered in the second inning. Indeed, that was also our only extra-base hit, and the team went hitless with men in scoring position - that's 1-for-16 in this series - just not getting the timely hits in this one which would have allowed us to get back on level terms.

Not that Colorado excelled in this area: they only had four at-bats with runners in scoring position all night and only managed one hit. However, they got a run in the first on a ground-out, and also saw our solo homer and raised us another one. Ex-Diamondback prospect Carlos Gonzalez went deep to lead off the game and Seth Smith started off the eighth by leaving the park off Clay Zavada. Smith appears to have been possessed by the spirit of Randy Winn this series, and is killing Arizona to the tune of 7-for-9 with four doubles and a home-run.

Doug Davis settled down admirably after going home-run, double (+ a Justin Upton error) to start the game, with only one run after retiring Helton for the first out in the opening frame. He went six innings, allowed seven hits and didn't walk a batter, striking out four hitters. However, another quality start wasn't enough to save his record from dropping to 7-12. I'm beginning to think there's a conspiracy at work, with the lack of run support being a cunning plot by AJ Hinch to drive down Davis's free-agent value and make sure he stays in Arizona. During those dozen defeats, his team has scored a total of only 28 runs, with two or less in eight of the games. Clay Zavada tidied up the last couple of innings after Davis left, should anyone still be watching at that point.

Chris Young celebrated his 26th birthday with a two-hit game, his first such since July 26, and was robbed of extra-bases in the ninth. He's 5-for-15 lifetime on his birthday, and is hitting .500 there over the past three seasons. I would recommend that his team-mates greet him at his locker tomorrow with a cake and ice-cream, see if they can somehow trick his subconscious into keeping this going. If that works, then Hinch will have to arrange something at Chuck E. Cheese tomorrow night, when the team returns to Phoenix. Perhaps involving a visit from a clown that makes amusing balloon animals. ["Go on, mate - do us a narwhal."]

That was pretty much the offensive highlight of the day, with no-one else reaching safely more than once. Both teams seemed keen to get away from this one: the Rockies 32 PAs took only 116 pitches, and our 35 PAs lasted a mere 120 pitches. Stephen Drew seemed in a particular hurry, our lead-off hitter's four trips to the plate lasting only nine pitches combined - not quite what you generally want from the top of your order. Eric Byrnes returned to the fold, pinch-hitting for Parra in the ninth, and singled.

The Diamondbacks ran themselves out of a possible big inning in the seventh. After Young's one-out single, pinch-hitter Alex Romero singled to center. Gonzalez threw to third to try to get Young but the third baseman instead threw to shortstop Troy 'Cartman' Tulowitzki to nail Romero at second base. "The throw by Gonzalez was a terrific throw," Jim Tracy said. "That was a huge defensive play." It summed up the night for the Diamondbacks. "We had momentum going in our direction twice with runners on tonight," Arizona manager A.J. Hinch said. "That will keep me up tonight. As soon as it happened, I thought, 'Oh my God: they nailed Alex. You bastards!'" 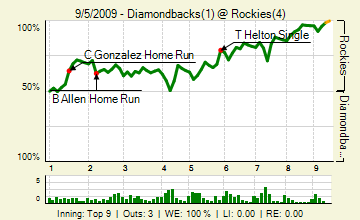 Can't say I'm too surprised by the lack of many comments in the Gameday Thread. And having contributed precisely three (3) of them myself, I am in no position to criticize. Should be better tomorrow, when we can actually - oh, I dunno - see the game. njjohn took the yellow jersey for the first time ever, being the only person to crack 50, with 'Skins in second place. Also present...well, not that many: snakecharmer, 4 Corners Fan, Wailord, katers, hotclaws, Diamondhacks, kishi, emilylovesthedbacks, txzona and unnamedDBacksfan.