Diamondbacks 4, Rockies 5: ...and then the bullpen's shoe fell off.

Share All sharing options for: Diamondbacks 4, Rockies 5: ...and then the bullpen's shoe fell off.

Let's start off by assigning the blame for this one where it belongs, and the red laser-dots are focused squarely on the chest of Wailord, who chose to tweak the nose of the baseball gods with the following proclamation:

And immediately after I had requested no such prediction too. The reality... Not so much. Five of the next six Colorado batters reached base safely, evaporating our two-run lead faster than you can, oh, light up a torch, reach for your pitchfork, and storm the gates of Castle Wailord.

A mob will be formed at 11pm. Meeting location and allocation of pointy implements after the jump.

I certainly imagine Dan Haren will be leading the charge, having seen his third straight solid outing completely undone before the bullpen retired its second batter. He does have to take some of the blame for not being there for the seventh, as his pitch-count ballooned into three figures after only five innings. He walked the first batter of the game, and especially early on, seemed to have problems locating his pitches. He threw strike one to only eleven of the 25 batters faced - that 44% rate is well off his 67% average this year - and consequently seemed to be behind in the count a lot. This helped lead to the Rockies go 2-0 up after two innings.

Interesting insight on the commentary tonight from Tom Candiotti, who reckons that Haren has been trying to pace himself through the season by using his split-fingered fastball less, due to the stress it puts on his arm. This might help to explain his recent relative lack of success, as it takes one weapon out of Dan's arsenal. Tonight, he seemed to improve as he went on: the leadoff walk was his only one of the game, and after a homer to lead off the second, only one man got past first the rest of the way. He ended with seven hits, eight K's and two earned runs in six IP.

The team did get back into the game, thanks to our sole hit with runners in scoring position for the night. Miguel Montero singled home two runs with two out in the third inning. We got a free bonus tally to take the lead the next time up, a Colorado error on a simple Stephen Drew groundball allowing a run to score, and Dan Haren - who also doubled - drove in our fourth with a sacrifice fly in the top of the sixth. But you won't win many games when your pitcher has your team's only extra-base knock of the night, and you are outhit by the opposition 13-5. Gerard Parra had two hits, Montero a hit and a walk, and Brandon Allen walked twice.

Of course, it helps that Chris Young followed Allen: it says something that opposing pitchers would rather pitch to him than a rookie with below fifty PA's in the majors. CY singled, yet is still batting .188: the lowest average by any player with 300+ at-bats since Rob Deer's amazing 1991 season, where he hit .179 with 25 homers. In his defense - and this cropped up in the comments - Young is probably not the worst hitting player in the majors, since he can at least take a walk. There are four players with 350 PAs and a lower OPS+ than his 62 in 2009: Yuniesky Betancourt (61), Dioner Navarro (55) and Willy Taveras (45).

The bullpen didn't do its job, Esmerling Vasquez, Daniel Schlereth and Blaine Boyer combining to allow six hits and two walks in only two innings, leading to three earned runs. Vasquez was particularly poor: his long run of success ended abruptly after getting the first out, the next three hitters faced getting a walk, single and two-RBI double. That sound you hear was the Diamondbacks' lead leaving. Schlereth came in, one batter too late, and prevented further damage. However, he seemed to have problems throwing his curve-ball for strikes - it was his first time playing at Coors, and conditions take a bit of adaptation [though he should just imagine he's pitching in Reno].

This was only a stay of execution. Boyer came in for the eighth: a single, bunt and RBI single by Jason Giambi delivered a crushing blow, and the Diamondbacks went down relatively meekly in the ninth. In contrast to their own relief corps, they mustered precisely zero hits in three innings by the Colorado bullpen. Mark Reynolds had a particularly rough night, going 0-for-3 with two strikeouts and a walk; he made a couple of nice defensive plays, but also committed an error which, inevitably, got changed into a Tulowitzki hit. What are the odds of that? Mark ran out of gas late last year too, hitting .208 with only four homers and a .644 OPS after game #116. 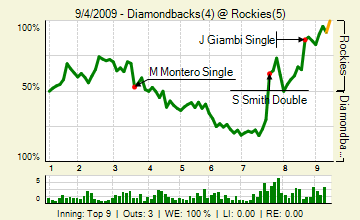 With a number of the regulars otherwise engaged e.g. at the Toros playoff game (I see they lost 6-3), or playing D&D, it was a relatively quiet, and somewhat grumpy Gameday Thread. Wailord was the most active commentor, though some of them would certainly not have been missed, shall we say. I ended up in second, which gives you an idea how quiet it was. Also present: emilylovesthedbacks, kishi, SaveUsY2J, hotclaws, snakecharmer, RockiesMagicNumber, pygalgia, NASCARbernet, ZonaBacks10, katers, txzona, Diamondhacks and befizzle.

Oh, well. At least the Dodgers lost... With the Giants, Rockies and Marlins all wiining, I guess it's nice to see the Diamondbacks are playing their part in helping to make the pennant race exciting. Don't look now, but we're only one game ahead of the Padres...