Diamondbacks 2, Dodgers 4: Garland Bites The Hand That Feeds Him

Share All sharing options for: Diamondbacks 2, Dodgers 4: Garland Bites The Hand That Feeds Him

Jon Garland apparently forgot that, while he may be wearing Dodger Blue, his checks for the remainder of the season are still being written in Sedona Red ink. Where's the gratitude there? After a wobbly start -and helped by some good defense and perhaps just a little home-town umpiring - he settled into a groove and ground the Diamondbacks down, allowing only two runs over seven innings of work and retiring the last fourteen batters. Meanwhile, Billy Buckner, he of the monstrous home/road ERA splits [Home: 14.34, Road: 2.33 coming in], was closer to the road version - while he took the loss, his new pitch certainly may be a promising sign for the future.

The series ends in a 2-2 split; as noted in the preview, that's not a bad result. However, each of the two losses remain irritants, as Arizona contributed to their own demise. Details after the jump.

It's still a work in progress, but if Billy Buckner ever makes it as a regular starter in the major-leagues, we might just look back at tonight, and mark it as the first day of the rest of his career. He had great success since his demotion to Reno, posting a 7-1 record and 2.27 ERA there, no mean feat given the altitude of Reno and hitter-friendly status of the PCL. He credits his good numbers there to developing a cut fastball: "That's been huge for me. When I got sent down I figured I had nothing to lose." Before the game tonight, he credited Dan Haren as one of those who had also helped him throw it.

Certainly, tonight, it proved a decent weapon in his armory, though on quite a few occasions, it didn't quite go where he was wanting it [or Miguel Montero expecting it!]. It seems to have good tilt on the ball, and provoked a good few swings and misses from the LA hitters. I also liked the fact that he generates a lot of ground-balls, though he needs to keep the ball down in the zone - otherwise, the likes of Mandy will happily dispatch it to the bleachers, as he did in the fourth. Otherwise, however, there weren't many hard-hit balls in the eight hits over six innings, and he was somewhat unluckly to give up four runs, all earned.

The Diamondbacks certainly helped contribute to the Dodgers cause themselves. Their first run moved into scoring position as the result of a Buckner wild-pitch and probably wouldn't hae scored otherwise. And their fourth occurred when Reynolds couldn't get the ball to second-base quickly enough, turning a potential inning-ending double-play into an RBI fielder's choice. Mark also made his 22nd error of the season, hurrying a throw to first that one-hopped past Brandon Allen.

It's worth taking a closer look at Reynolds' defense this season. While errors are a rough measure of fielding, his current pace (26) would be well short of the major-leading total of 34 in 2008. Even that number is misleading, since Reynolds has played significantly at 1B this year for the first time, and that's where five of the errors come. Purely at third, he has made one error per 52.8 innings, much better than last year, when it was one per 37.9. More advanced metrics like UZR/150 concur: he has improved at 3B from -3.7 in 2007, to -3.2 last year, and -2.0 this. He is getting better with the glove.

Our offense was largely impotent, not helped by the late scratch of Justin Upton from the line-up due to a contact issue. As I noted in the GDT, a contact issue hasn't stopped Chris Young any time this season... I also suspect a one-eyed Upton would be more potent than Young. CY went 0-for-3, is 1-for-17 with nine K's since his return, and is at .187 on the season, while Upton came in as a pinch-hitter for the eighth and promptly smacked a double. Did I say one-eyed? Sad to say, I suspect blindfolding Upton, giving him a piñata stick, and spinning him around before sending him to the plate would still be an improvement over Young.

It looked quite promising early on, with a walk, two hits and a run in the opening inning, courtesy of a single by Mark Reynolds. Even the outs were generally quite hard-hit, such as the laser down the first-base line by Alex Romero, that was somehow turned into a double-play. Unfortunately, after Stephen Drew homered, giving us back the lead with one out in the third inning, and Ryan Roberts then singled, we didn't get another base-runner against Garland. As noted, Upton doubled, and Montero singled to lead off the ninth, but that was it the rest of the way. Drew had a couple of hits, and Montero a hit and a walk.

We did get to see the Diamondbacks debut of Kevin Mulvey, the player no longer to be named later in the Rauch trade [ok, it was actually a bit more complex - let's not go there]. He came in and gave us a 1-2-3 inning, though it is generally thought he will be in the mix for a 2010 rotation spot, rather than operating out of the bullpen.  I hadn't realized he was part of the haul the Twins got from the Mets in the Johan Santana trade. We also saw Bryan Augenstein in the ninth - he gave up a hit and a couple of loud outs, but escaped without any damage. 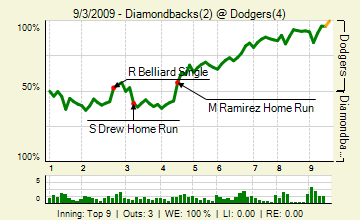 Hey, 'Skins! There's a new sheriff in town... Well, perhaps a little premature - he's got about 50,000 comments to go in total - but for tonight, Wailord was stylin', with over two hundred of the near 700 comments, no-one else reaching three figures. Such diligence can only be applauded. 'Skins and kishi filled up the podium, while the following were also present: Sprankton, justin1985, Diamondhacks, mrssoco, NASCARbernet, pygalgia, pierzynskirules, Surpriseman (welcome!), hotclaws, SaveUsY2J (who is the commentor previously known as BattleMoses), Muu, njjohn, RockiesMagicNumber, snakecharmer, txzona and mohavegreen.

Off to Colorado with this team, and I can't say I'll be sorry to see the back of these 7:10pm starts. Dan Haren takes the mound, and we'll see how we stand up against another playoff-contending team there.