A chilly night at the end of September by the bay. Not the kind of night where the ball carries at Twitter Park, the heavy sea-air holding it in like the blanket sported by many in the crowd. Well, the ball didn't seem to get the message: the teams combined to leave the yard six times - and there's a good case to be argued that it was actually seven. Unfortunately, the Diamondbacks only managed four hits that didn't lead to trotting round the basepaths. The Giants felt no such limitation, their last in the league offense pounding Doug Davis into an early departure, and knocking out a total of 22 baserunners.

Never a good sign when the bullpen is warming up in the first inning. But that's what happened tonight, Yusmeiro Petit sent jogging to the mound after Davis walked three consecutive batters - that and a wild pitch helped to give the Giants a 2-0 lead. Fortunately, former Diamondback-killer Randy Winn - a mantle now completey pwned, as the kids say, by Pablo 'Ninja Turtle' Sandoval - helped Doug out, swinging at the first pitch he saw, Doug's 38th, and flew out harmlessly to Justin Upton in right. Things didn't get much better for Davis in the second, as he hit the pitcher (hitting 2-for-38 with 26 Ks) and after a total of 60 pitches, had only got four outs. Fortunately, Michelangelo hit #61 into a double-play. Davis loaded the bases again in the third, and escape damage.

The Diamondbacks, however, tied things up at two in the fourth...then they didn't. Miguel Montero made it a one-run game with his 15th home-run of the year, and it looked like Ryan Roberts had gone back-to-back. Torres, in LF made a leaping grab, and lost his glove, but the ball somehow - the details remain vague even on multiple viewings - bounced back into play and into the grasp of a now-horizontal outfielder. Roberts, meanwhile, continued around the base-paths and crossed home. On video review - the fourth such in, what, barely a week for AZ - the official ruling was a ground-rule double. Note: not a double. And that doesn't make sense to me: if it didn't leave the park, then Roberts touched all four bases and scored on an inside-the-park homer, while Torres waved the ball about in the outfield.

Judging by the way the Gameday Thread completely imploded, from roughly that point on, I think the ruling was taken as proof that the baseball gods had abandoned us. We had rampant image posting, a discussion of Windows Vista, far too many bears and even a meta-discussion of off-topic discussions.  Doug Davis chipped in by letting the Giants take a 4-1 lead, allowing another home-run, and then leaving, haven taken 107 pitches to get through four innings, on seven hits and five walks. A WHIP of 3.000 is not exactly what we had hoped for - the Giants will be sorry to see the back of Davis, with a 5.11 ERA in his six starts against them this year.

Meanwhile, Montero was doing to the Giants what Raphael had done to us all season [his 7th-inning homer meant he is hitting .509 against the D-backs in 2009, 27-for-53. I blame, completely, all the bear talk in the thread. You know who you are]. Having narrowly missed a McCovey Cove homer in the fourth, he made no mistake in the sixth, getting the third multi-homer  game of his career, giving him 16 on the season [I was stunned to see former D-backs catcher Rod Barajas has hit 19 homers for Toronto? In five years here, his high was three] Augie Ojeda was the only other Arizona hitter to reach more than once, though Justin Upton launched his 26th long ball baywards in the eighth.

Stephen Drew continues to be a Gurgling Vortex of Suck when facing left-handed pitching. He was 0-for-4 tonight, making him 3-for-43 with a walk against LHP since August 17th. Batting .178 against them this year, it's proving a flaw in his game that's a lot harder to overlook when he's no longer hitting .300 off right-handed pitchers, like he did last season. If he's going to play next season, then we may need to find a platoon partner who can take some of the LHP AB's at shortstop. He's hardly alone in having had a poor September though: offensively, it's been the team's worst since April, and if we don't score three times tomorrow, our runs/game figure for the month will be the lowest of the year.

The bullpen didn't exactly help, matching Davis by allowing four runs over four innings of work, on a total of eight hits and two walks. Leo Rosales and Daniel Cabrera were the better half, each producing scoreless frames: Yusmeiro Petit managed that in the fifth, but then gave up a run without recording an out in the sixth. Most of the damage, however, was done in a three-run seventh against Clay Zavada, which included two home-runs. His ERA on the year is now a season-high 3.42, and his second-half number is a not-so impressive 4.81. The league seems to be adjusting better to Zavada, then Zavada is to the league. 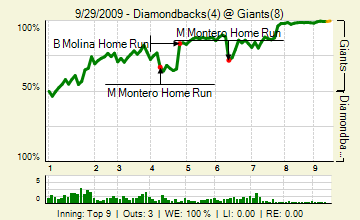 There was a Gameday Thread. That's all I want to say: it was like a bad day at GLB. Tomorrow, we send Kevin Mulvey to the mound against Brad Penny. Yeah: I'm really looking forward to that one. In one of the less-impressive scheduling decisions by Fox Sports Arizona, that game will be televised, but Thursday afternoon's contest between Tim Lincecum and Dan Haren is not going to be screened at all in Arizona, not even on delay. I know these things are arranged in advance - but I also know they can be changed. Shame they weren't, and so we won't get to see our ace's last start of the season.