Diamondbacks 4, Dodgers 1: ...And Then, the Deluge

Share All sharing options for: Diamondbacks 4, Dodgers 1: ...And Then, the Deluge

Max Scherzer took the mound against the Dodgers tonight, and the word of the day was consistency. In his past six starts, Max had a 6.47 ERA and only made it through the sixth inning once. Facing a potent offense on a team fighting for a postseason spot and the Dodgers' ace in Chad Billingsley, this had all the makings of a pitchers' duel...or a disaster. In a way, it ended up being both; the offense was missing for about eight innings, and the usual warning signs of a no decision for our starter were lit up in all their neon glory.

Sounds like the rest of the season, right? Except this one actually worked out in the Diamondbacks' favor. Stunning, I know.

Ten minutes of offense and another promising start from our young fireballer after the jump.

First, let's talk about Scherzer's outing today. Simply put, he was rock solid. He matched the longest outing of his career (Jun 11 against the Giants) by going 7 2/3 innings, finally getting chased by a ManRam RBI single. He was efficient, needing just five pitches to get through one frame and sitting at 102 total when he got the hook. Part of that was helped by a greater reliance on his defense -- Scherzer only struck out four, but was still dominant.

You wanna talk about dichotomy? I'll show you a dichotomy. The Diamondbacks looked dazed and confused against Billingsley in the first four innings. In fact, nobody reached base at all -- Billingsley racked up three strikeouts and a slew of poorly-hit balls and the D-backs found themselves with nothing in the hit or walk column through four. A Reynolds groundout to start the fifth seemed like more of the same, but baseball has a way of taking funny, abrupt turns.

Miguel Montero started things off by slicing an opposite-field double, and Brandon Allen promptly followed that by pulling a no-doubter to right to make it 2-0. Shutout, no-hitter, perfect game -- all gone in the span of about a minute. But the offensive faucet hadn't been turned off yet. Alex Romero laced a single up the middle to keep things going. After an Augie Ojeda strikeout, the Diamondbacks got three consecutive hits with two outs to bring in a couple more runs. Scherzer helped his cause with a knock that put runners on the corners; Stephen Drew hit a grounder deep enough for an infield hit, scoring Scherzer and Furcal threw the ball away to allow both runners to move into scoring position. That gaffe allowed another run to score, as Drew came home on another infield hit by Gerardo Parra.

After the shellacking in the fifth, Arizona racked up four walks, a hit, and had a runner reach on an error by the pitcher, but that was it. Usually this season, when the Diamondbacks have piled all their runs into one inning and then rested on their laurels, they've lost miserably. Tonight was not the case.

Credit for preserving the lead goes mostly to Scherzer, with an assist from Esmerling Vasquez (who got the final out in the eighth after Manny's single chased Mad Max) and Juan Gutierrez getting his first save in his new role as closer, however long that lasts. He last had a save on May 26.

Outside of the fifth, the Diamondbacks had just one hit, and still won this game. Maybe this is the baseball gods making things even from the night before when it seemed like we gave a game away. Or maybe this season is just really freaking strange. 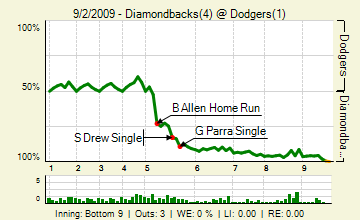 Since the offense was so sporadic, only three Diamondbacks reached base more than once. Scherzer and Allen both had a hit and a walk (Allen's hit, of course, being particularly important), and Reynolds got a hit and reached on an error -- but still got stuck with GEoS "honors." For the Dodgers, only Ethier got on base multiple times (three hits). Elbert, McDonald and Haeger all turned in solid innings out of the pen.

Tomorrow's pitching matchup would've been very confusing a few days ago. It's Billy Buckner against Jon Garland in the series finale, with the Diamondbacks guaranteed at least a split against the division leaders. Considering the past few days, there's no telling what will happen.