Share All sharing options for: Diamondbacks 8, Padres 5: A Tale of Two Cities

That whirring sound you hear, is Charles Dickens spinning in his grave like a gyroscope. Details after the jump - but I promise to ease off on murdering any more works of great literature.

Two great innings, one that was really crappy, and six which were forgettable. Ladies and gentlemen: your 2009 Arizona Diamondbacks, who demonstrated once again why, to them, "consistency" is just the art of swindling a sibling. If this team could just master and harness that, they would be unstoppable. Instead, being a fan is like walking on razor-blades; there's rarely any sense of comfort, and instead, a permanent feeling that you are teetering on the edge of disaster.

Witness tonight, where the team started off as if intent on wiping out the sour taste of last night's game [Kevin freakin' Correia!], scoring three runs in the first inning before they made two outs, thanks to RBI hits from Stephen Drew, Justin Upton and Ryan Roberts. Just what the crowd, clutching their Mark Reynolds bobble-heads, wanted to see - 39,222 through the gates for this one, the third-largest crowd of the season [random attendance note: even though they're the reigning AL champions, I note we are still outdrawing our expansion brothers in Tampa by about 2,500 per game this season]. We settled down, anticipating the blowout win which was sure to follow.

However, our offense didn't get the memo, apparently believing that three runs was more than enough run support for Dan Haren, and the nearest we got to scoring for the next three innings was actually Haren himself, who was held at third - to the boos of the crowd - after he singled and Chris Young doubled with two outs in the fourth. Drew then struck out looking to end that, but hey, Haren was cruising, mowing down Padres like King Henry VIII - what, too soon? He'd allowed only two singles and a walk through four shutout innings, so business as usual there. What can possible go wrong?

Answer: the top of the fifth. Six hits totaling ten bases, two wild pitches, five runs for San Diego - and it could have been worse, since the outs included one failed bunt attempt and one made on the basepaths. Haren has had fourteen games this year with fewer hits than he allowed in this inning, and only twice has he had more than one wild pitch in any start. Admittedly, he wasn't helped by Upton misplaying a one-out fly-ball into a triple [Keep telling yourself, "his peers are in Double-A"], but it seemed to unsettle Haren. His final line: five runs in six innings, on nine hits and three walks, though did strike out eight.

By the middle of the fifth inning, that 83.3% Win Probability had slumped more than fifty percent, all the way down to 29.3%, with the Padres having a 5-3 lead. We got one run back immediately, Reynolds hammering his 44th homer of the season with one out in the bottom of the fifth. However, we wasted what seemed like a golden opportunity in the sixth. Eric Byrnes hit a leadoff double, yet this remarkable effort was wasted as the next three batters made outs. It seemed like that would be it; late-inning heroics had not been the stock in trade of this team recently.

Even after Daniel Schlereth walked the first two batters he faced, and managed to escape the jam in the top of the seventh, it didn't feel like we could come back. Not even when we loaded the bases in the bottom of the seventh, putting the tying run on third-base. For it was Chad Tracy who came up to pinch-hit. Tracy hadn't had a hit in more than a month - since August 23rd, in fact. His last home-run? Another month prior to that, on July 23rd, exactly one hundred plate-appearances previously. And when he fell behind 0-2, the specter of FAIL loomed large over Chase, like.... like... like a large, FAIL-shaped spectral thing.

Naturally, Tracy than smacked the next pitch approximately 432 feet into the pool area for the Diamondbacks third grand-slam of the year, and the team's first come-from-behind slam since Byrnes hit one off Tom Glavine in Atlanta, on May 25th, 2008.  That gave Arizona an 8-5 lead, which they managed to hold onto - though Juan Gutierrez made things a little interesting, hitting consecutive batters with two outs in the ninth [maybe retribution for Reynolds and Miguel Montero getting hit earlier?], to bring the tying run to the plate. But a harmless groundout ended the game, and gave the Diamondbacks a victory which really seemed pretty unlikely in the middle innings. Let the Fangraph tell the story: 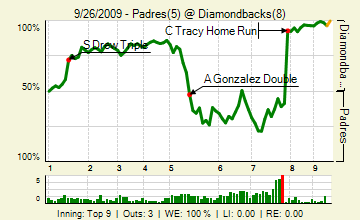 Very light Gameday Thread, what with the game not being on TV - and, let's be honest, the alternative leisure pursuits available on a Saturday night, compared to watching a game between a pair of sub-.500 teams. Nobody hit even fifty, and only four of us reached double figures; myself, hotclaws, NASCARbernet and 'skins, who didn't let actually being at the game stop him from meeting his usual daily quota. Also present: katers, mrssoco, Wailord, GuruB, gasgarza, kishi and the late-arriving Fiona.

She brought news that USA Today's Bob Nightengale is saying, "The Dbacks, searching for pitching help, plan to listen to offers for SS Stephen Drew this winter. The Red Sox likely will make contact." Not yet had any kind of independent confirmation of this, and it seems a curious decision - it's not like we have any hot-shot prospect being blocked by Drew. Unless this is tied in some way to the Jon Garland trade? That's the only thing that would perhaps make some sense. It's not the first time Nightengale has come out with something no-one else has been able to verify, such as his claim the D-backs don't plan to pick up Webb's option. We'll see.

Last home game of the year tomorrow, and we'll be going to Chase. Here's to the end result being as satisfactory as tonight, though if the performance is a little less like a work of classic fiction, I won't mind too much.