It would be nice for the Diamondbacks to finish the year strong, something to hold onto over the winter, and a glimmer of hope, looking forward into next spring. "2010 Opening Day Lineup, maybe?" said Muu before the first pitch of tonight's contest. Well, if that is indeed the case, and they play like they did tonight...boy, next year looks like it's going to be another long, painful season. Arizona lost for the sixth time in the last eight contests, largely because Kevin Correia - yes, Kevin freakin' Correia - became the first opposing starter this year to throw a complete-game shutout in Chase.

Let's just put that into context, shall we. Nobody did it in 2004, when we lost 111 times. Never mind a shut-out, Correia hadn't even gone past eight innings in his career. I don't think I've seen a team more obviously ready for the end of the season - frankly, any kind of "recap" is more than this deserves. Oh, alright. If you absolutely insist...

Tonight was the eightieth time an opposing pitcher against the Diamondbacks this season has gone six or more innings, with three or less earned runs. Now, some times, you just have to accept it - you're facing a good arm, say someone like Lincecum or Jimenez. However, the striking thing is how often Arizona have made mediocre pitchers look far more impressive. Kevin Correia has a career ERA+ of only 94 before tonight, but you wouldn't know it from the way he shut the Diamondbacks down tonight. And this was his fourth quality start of the year against us, in five attempts. Here are the journeymen who have managed multiple quality outings against Arizona this season

I won't go into all of those who have managed it once, but here are some "highlights": Jason Vargas (77), Manny Parra (83), Garrett Mock (82), Kevin Hart (82) and Wade LeBlanc, whose career ERA+ is 69. It seems to have been a far too common occurrence this season. Tonight, we managed only six hits and one walk. Justin Upton had two of them, and was about the sole participant in the evening's entertainment who did not appear to be in a hurry for another appointment, somewhere beyond the post-game buffet.

Everyone else was intent on hacking at whatever slop was thrown up there. You can see this from the total pitches by each side: the Padres made us throw 165, while Correia took only 109, despite facing just five fewer hitters. It wasn't like he was getting ahead early either, with first-pitch strikes to only half the 32 batters. But the Diamondbacks were just awful at choosing when to swing, and when they did, the results were lousy: Correia had 17 called strikes, 16 swinging strikes and only ten foul-balls. A mere five of 27 Arizona outs left the infield.

On the pitching side, it was a typical Max Scherzer outing: averaging higher than 20 pitches per inning, but with more than a strikeout per frame. He allowed three runs on five hits in five innings, but it was really the three walks that hurt Scherzer, with two of them coming around to score. He did strike out six in five innings,  giving him 174 for the season, in 170.1 innings. Among pitchers his age, only Felix Hernandex and Yovani Gallardo have more K's this year. Tonight, he wasn't helped by his and Miguel Montero's inability to control the running-game, the Padres going 3-for-3 in attempts while Scherzer was on the mound.

Speaking of which, where has Arizona's running-game gone? We're a young team, with plenty of speed: yet it's something we don't seem to be using. Now, in meaningless late-season games, would seem the ideal opportunity to be stretching out the legs and testing our skills. Yet, in the past fifteen games, we have only two stolen-bases. While overall, our "extra-base taken" percentage - going first-to-third on a single, say - is a little higher than league average this year [42%-39%], it's something I think should be better. Same with infield hits: we have 23 fewer than the NL mean, not what I'd expect. We need to cut back on pickoffs too - our figure of 21 is beaten only by the Rockies in the NL. More fundamentals... 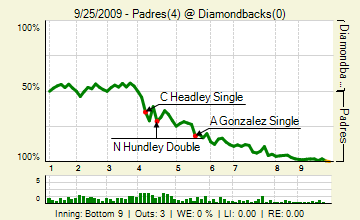 Truly a collective vortex of gurgling suck, with our starting pitcher the most productive hitter on the team - Upton was the only other batter to make a positive contribution. One of the questions I asked Daron Sutton was how hard it was to keep enthusiastic for meaningless games like this at the end of a disappointing season. He said he had not trouble, but I think even this one would have been taxing. So a herd of kudos to those who showed up in the thread tonight, led by DbacksSkins, the only man to crack fifty Also present though, were soco, Muu, hotclaws, emilylovesthedbacks, AcucracK, Azreous, katers, Wailord, Zephon, pierzynskirules, NASCARbernet, RockiesMagicNumber, kishi and victor frankenstein.

Here's to better tomorrow. Seems a safe assumption, since it can't get much worse than being shut out by Kevin Correia. Oh, crap: just realized who it is we're facing tomorrow. Yep: Wade LeBlanc... I think I may be digging a bomb-shelter in the back-yard.