You’d be forgiven if after looked at the box score for tonight’s game you believed it had been a good game, one featuring excellent pitching and timely hitting. Sadly, with Johnathan Sanchez squaring off against Kevin Mulvey, this probably is not be the case.

The two front runners for the NL Cy Young traded empty frames to start the game, but the Diamondbacks were first on base with ChrisYoung and Ryan Roberts drawing early walks. A Justin Upton strikeout, a fielder’s choice from Miguel Montero, starring a slide and roll straight from Slip-n-Slide by Roberts, and a Mark Reynolds strikeout quickly extinguished any threat.

Mulvey refused to be outdone by his counterpart in black and orange. After issuing a walk to Pablo “Panda Express” Sandoval, Juan Uribe cracked a crippling blow of a double in between Eric Byrnes and Young that allowed the Express to huff and puff his way home. Not quite on an egg roll, but it would be enough offense to keep the Diamondbacks at bay.

For a time, it would seem Sandoval’s gasping run would be the only run. The next three innings would fly by with only the occasional base runner to spice up the night. The best chance came in the fourth when the Diamondbacks managed to Reynolds and Byrnes singled to get two on with one out. Augie Ojeda would promptly pop-out after looking a couple strikes, and Mulvey attempted a battle before striking out with a tepid swing.

The sixth inning would provide the most offense between the two sides all night, as Sandoval walked again to set-up Uribe. The former White Sock took one ball and then hammered a home run to left. 3-0, Giants. Mulvey would get the last two batters of the inning fairly easy, but that would be it for the young man.

The Diamondbacks, or more specifically Montero, would mount a response in the bottom of the sixth, however. Montero led off with a single, waiting for a partner to bring him home. Reynolds would battle hard, but after five strikes he would go down with another K to add to his baking sheet. Rusty Ryal luckily was up to the challenge, and he would scorch a ball to center, scoring Montero and ending up with a triple. Facing an opportunity to reduce the lead further, AJ Hinch wisely chose to pinch-hit the woeful Byrnes with Gerardo Parra, who played the part of a big-leaguer and sac-flied Ryal in.

With the score now 3-2 going into the top of the seventh, a comeback seemed attainable. The Giants, Blaine Boyer, and Ryal all had different plans, however. Boyer would trade two outs with a single to Fred Lewis, and a single to Andres Torres, putting men on the corners for the Dreaded Randy Winn. Arizona’s least favorite nemesis got a little help from his “friend,” Rusty Ryal, who booted a more than routine dribbler to first base and run would score to bring the game to 4-2. The Panda Express would be next, and he quickly snapped the first pitch he saw into a single, scoring Torres. Although he would be caught in a run-down after trying to sneak to second during the confusion, the damage was done.

It would be disingenuous to suggest that the Diamondbacks were close to winning after this point; in fact, they never probably threatened, only getting a single base runner on in the seventh and ninth. Daniel Schlereth looked good in his inning of work, however, making an appearance that started with a walk but ended with three quick outs including a strikeout.

And that’s the way it was. A game certainly winnable for the home team, but as is often the case this season there was very rarely anything prolific strung together. The Diamondbacks out-hit the Giants 8-4, but a defensive blunder by Ryal and a timely home run is truly the difference. The starting defensive eight for the Diamondbacks would all get hits except for Young and Upton, but they were doing it at all the wrong times.

So if you were deceived and thought you missed a pitcher’s duel, you’d be half right. One can’t help but wonder, though, if it wasn’t just two inept offenses clashing instead. 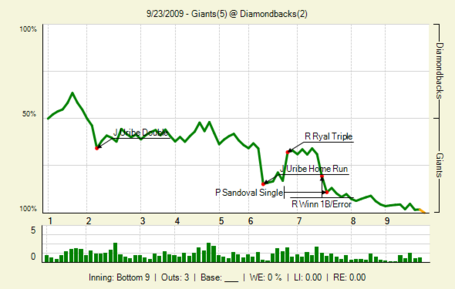 Bit of a scary game for the home plate umpire Marty Foster.  He took a couple baseballs to the forearm and one to the facemask and was a little shook-up.  Hopefully everything is fine for him, and nothing more than a little bruising to nurse in the morning.

I suppose you qualify the game thread as "interesting."  With revelations about Wailord's schoolmates, the apparent Soco-demic taking Azreous (whose dying breath was for me to take tonight's recap), kishi, katers, and 'Skins all hostage, there was never a dull moment and clocking in at a very Pablo Sandoval like 697.  I led the way somehow with 164, holding of a sick DbacksSkins and a late Wailord, both with triple digits as well.  Also included: kishi, AcucracK, NASCARbernet, Our Holy Jim-ship, hotclaws, piratedan7, pygalgia, victor frankenstein, Azreous, SaveUsY2J, katers, and pierzynskirules.