Here's a collection of semi-random stuff from the past few days, that I never quite got round to posting, what with one thing or another. Given it's an off day on Thursday, might as well have something to talk about. We discuss the rumblings concerning the future - or otherwise - of Eric Byrnes,;the latest word from Brandon Webb on what he wants from the Diamondbacks [a clue: it's green and has pictures of American presidents on it]; we look at the latest Diamondback to go under the knife; and we hear the latest from manager AJ Hinch, courtesy of KTAR. All that and more (if I can find it!), after the jump.

D-Backs could cut ties with Eric Byrnes - Scott Bordow of the Tribune says, "Don’t be surprised if the Arizona Diamondbacks eat the final year of Eric Byrnes’ three-year, $30 million deal and release him in the offseason... The Diamondbacks will take a lot of grief if they release Byrnes. But it would be the right thing to do." A lot of grief? From who, exactly? Fans of The Eric Byrnes Show? Mrs. Byrnes? I think even Eric would probably have to admit that, at this point, the justification for keeping him on the roster in 2010 is hard to find, even for the most ardent supporter.

Rob Neyer also covers the topic of Byrnes, saying "While $30 million might have been a bit much, considering Byrnes' age, it was not outrageous. The Diamondbacks might reasonably have expected $25 million of performance, and another $5 million of goodwill." Just for the record, fangraphs.com has Byrnes at a value of $12.4m in 2006 and $16.7m, so on that basis, $30m for three years indeed doesn't seem exorbitant. Just a shame that his total value since is minus $3.2 million.

Webb not interested in taking pay cut - The Republic reports that Brandon Webb is not interested in restructuring a deal or reducing his team option for 2010. "I'm not interested in doing that. If it comes down to that and they ask me to do something like that, I would have to - just for myself - see what else is out there and see if there's something better." So much for Nick Piecoro's carefully-crafted alternative, involving innings-based incentives. It looks like we will either have to pay or watch him walk. The timing is unfortunate: we have to pay him $2m anyway, and have no chance to see him pitch before we have to decide. I've a feeling we will end up biting, and 2010 will be his free-agency audition.

Chris Snyder had surgery on his back yesterday. The process, known as microdisectom, is to relieve pressure caused by a bulging disk in his spine on a nerve, and involves the removal of a small portion of bone over the nerve root. It's regarded as a fairly simple procedure. "The success rate for a microdiscectomy spine surgery is approximately 90% to 95%, although 5% to 10% of patients will develop a recurrent disc herniation at some point in the future." It also says, "Post-operatively, patients may return to a normal level of daily activity quickly." but I doubt that applies to major-league catchers to quite the same extent!

As Piecoro points out, this probably does put the end to any chance of trading Snyder over the winter; no-one will give us much for a catcher with a poor 2009 season, coming off back surgery, even of the most trivial kind. Looks like it'll be Snyder and Miguel Montero on Opening Day 2010, which has got to be annoying for John Hester - he has looked not bad at all, albeit in very limited playing time. He's gone 7-for-20 with three extra-base hits. I think we could do much worse as a backup next season. However, he only just turned 26 last week, so it's not like this will be his last opportunity.

Here's a somewhat-poorly AJ Hinch, chatting with Gambo and Ash on Tuesday. It's okay, we have checked the sound file does not have any nasty viruses... He discusses the recent malaise as the team goes through the last few weeks of the year, the defensive miscues and how fixing them is one of his (many) top priorities during the upcoming off-season. 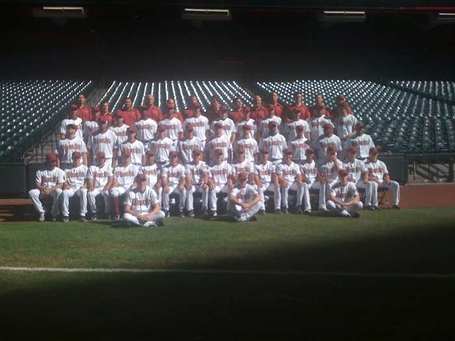 Wednesday was team photo day at Chase [pic via Dbacksinsider]