Share All sharing options for: Diamondbacks 10, Giants 8: Cain is Un-Abel to restrain Arizona

Sprankton was working till 1am and then his home internet went out, so apologies for the delay in the recap - it did, however, allow me to use one of the crap puns we came up with in the thread. The Diamondbacks pounded Matt Cain for seven runs in 2.1 innings, and it's a good thing too, because we needed every one of them and more. For Doug Davis didn't have one of his better outings, and a wobbly ninth inning brought the Giants rather closer than we'd have liked.

Even though any chance of the Diamondbacks making the playoffs evaporated a long time ago, it's still nice to be able to play spoiler, and hurt someone else's chances. Last night, we hit the Giants' hopes hard, halving their chances as a result of the defeat. Almost all of the damage occurring in the third, as their Win Probability slumped from 64.4% when they took a 4-3 lead, to only 7.7%, after Chris Young walked to load the bases with one out, part of a six-run Arizona inning. Surprisingly, we have scored five-plus runs in a frame more often (16 times) than we've had it inflicted on us (15). Doesn't feel like that.

Good to inflict the shortest start in Matt Cain's career, not caused by a line drive. Didn't seem like that in the first, as we went down in order on a dozen pitches, but after being staked to a 3-0 lead by the second, he coughed it up on RBIs from Reynolds, Gerardo Parra and Brandon Allen. The first-named became the ninth Diamondbacks in franchise history, and the first since Luis Gonzalez in 2003, to drive in a hundred runs during a season. He needs four more to end the year in the top six, which is quite plausible with ten games to go.

Things got a lot better for the Diamondbacks in the third, though not until after the Giants had retaken the lead. We sent 12 men to the plate and eight of the first nine reached safely, on six hits and two walks. Miguel Montero turned the deficit around with a two-run single, and further runs were then driven in by Parra, Allen, a wild pitch and Stephen Drew. The most unusual was Parra, who hit a ball off the outfield fence with a loud clang, which was originally called a home-run. However, it was reversed (correctly) on appeal, and turned into an RBI double - during the review, Cain was spirited off the mound by his manager,

His replacement failed to retire any of the four batters faced, as well as throwing the wild-pitch. Finally, the amusingly-named Bumgarner ended things, probably because the Diamondbacks' hitters were distracted by sniggering at his name. That was the end of the scoring until the seventh-inning stretch: Doug Davis had settled down after a wobbly start, posting zeros from the fourth through the seventh, and ended with a line of five runs on ten hits and four walks in 7.1 innings, though he still got the W

The bottom of the seventh saw Randy Johnson take the field, in his first relief appearance in our park since Game 7 of the 2001 World Series. He got a warm reaction from the crowd, perhaps sensing that it might be the last appearance ever in Phoenix for the 46-year old. He struck out the side, albeit around a home-run by Rusty Ryal, who finished the night. a double short of the cycle and walked. Every starter got a hit for us, as we had sixteen in total: Montero also had a three-hit game, while Allen, Justin Upton and Davis each got a pair, Upton getting a BB too.

Turns out we needed almost all the hits. Davis loaded the bases with one out in the eight before being relieved by Juan Gutierrez. With the aid of a fine grab by Allen, damage was limited to one run, but the ninth began for Gutierrez with the Giants going single, single, triple, and the tying run was suddenly on-deck, with nobody out. While we fans began to look around for things to throw, our reliever buckled down to retire the next three hitters, though a line of three runs in 1.2 innings of work is not one of which to be proud. Still, we won - it was the fourth victory this year while allowing eight or more runs, something we didn't do at all in 2008.

Audio from a number of sources. I've got AJ Hinch talking before the game about how defense will be a focus between now and next Opening Day, Doug Davis discussing his outing, and Mark Reynolds taking "Things that don't start with a K for $200, please, Alex." 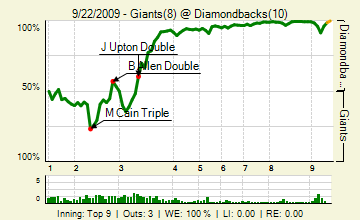