Diamondbacks 4, Giants 5: Another One Gets Thrown Away

Share All sharing options for: Diamondbacks 4, Giants 5: Another One Gets Thrown Away

Speaking to Mark Grace before the game - yeah, I'm namedropping, for reasons I'll mention later - I asked him what one thing the club needed to do over the off-season. His answer was blunt and to the point: get nine guys who can catch the ball. The Diamondbacks' performance tonight could hardly have been better crafted to make Grace look like a genius. Three errors by Arizona gave the Giants extra outs, bonus bases, helped remove Ryan Roberts from the game with an injury, and in the final analysis, certainly played a crucial role in condemning the team to a one-run defeat against the Giants.

Details - and more namedropping, I imagine - after the jump.

The defensive indifference started in the top of an interesting first inning. The first batter reached when Brandon Allen clanked a fairly-routine looking ground-ball. However, that particular error was undone by Billy Buckner picking the speedy Velez off, much to the latter's disgust. That looked like a crucial play, as an infield single and walk then put the next two batters on. However, Buckner rolled up a nice ground-ball directly to Ryan Roberts, and it looked like the inning would be over. CLANK. The ball went right through Roberts, and the runner scored from second, giving the Giants a one-run lead.

Credit to Buckner for getting out of that mess - first and third, one out - without further damage, though the additional outs basically wrecked his pitch-count. He didn't look bad at all after that, and had allowed only one earned run through four innings, but his pitch count was at fifty after only two frames. His stamina does seem to be an issue, and after the second go through the order on, opposing hitters are a lot better at dealing with Buckner. The Giants  batters were 3-for-6 the third time they faced Buckner tonight, and the opposition have now hit .435 (27-for-62) when they see him for the third or fourth occasion this season. That will need to be addressed if he's to become a permanent member of the rotation next season.

However, the Diamondbacks hit back almost immediately. Chris Young walked, and with two outs, Mark Reynolds smacked what I think was one of the highest fly-balls I've ever seen. The only way I could tell where it was going was seeing the Giants outfielder going back, back, back to the wall and then just watching as it landed back in the seats. That's home-run #43, and gives him 99 RBI on the season. He almost got number 100 - and been the first Diamondback since Gonzo in 2003 to do so - with a laser-beam in the fifth, but the Giants had him played perfectly. And needed to be: if the shortstop had been two feet to either side, it would have been a hit.

Mark had broken one of the unwritten rules in the fourth, making the first out at third, as he tried to reach there from first on a single by Roberts. However, he was gunned down by a perfect throw from left-fielder Velez; it was close, and one can hardly blame him for trying. Especially with Eric Byrnes on deck: he had a woeful evening, with three infield pop-ups and a strikeout. EB couldn't even get a bunt down, after Augie Ojeda walked to lead-off the eighth, putting the tying run on base. Almost as bad was Stephen Drew, who was bullied mercilessly by the Giants lefties, going 0-for-4, before singling with two outs in the ninth - off a righty, natch. He's now hitting .181 against LHP this year.

The Giants retook the lead, tying things up in the fourth, then chasing Buckner with three consecutive one-out hits in the fifth - he threw 104 pitches to get through 4.1 innings, on six hits and three walks, and was charged with four runs, three earned. Leo Rosales walked the first batter he faced, then allowed a sacrifice fly that went about as deep as possible in Chase, sending Chris Young right to the track. That made the score 4-2, but Justin Upton tied things back up with a bases-loaded single in the bottom of the fifth, chasing Zito from the game. The sides then exchanged zeros in the sixth and seventh.

The Diamondbacks then lost the game in the eighth. I imagine your reaction to this will be a rolling of the eyes and perhaps a slight sigh of resignation. Esmerling Vasquez was the villain of the piece tonight. He walked the first batter, and the next Giant put down a bunt that got past the pitcher. He charged back to retrieve it, but Ryan Roberts was also intent on fielding the ball, and Vasquez executed the sort of cross-check on our 2B that'd have merited a stay in the penalty-box, had it been seen on an ice-rink. Vasquez then threw the ball past first, putting men on second and third. He got the next out, then intentionally walked the bases loaded; a ground-ball was delivered, but we couldn't quite double-up the speedy Lewis and the Giants scored what proved to be the winning run.

That was the only run charged to the bullpen in 4.2 innings of work. Again, I am somewhat surprised by the pitching choices made by AJ Hinch, putting first Yusmeiro Petit and then Daniel Schlereth into tied games. However, tonight, his confidence in both men proved justified: they posted scoreless sixth and seventh innings, and were joined on the zero front by Blaine Boyer's ninth. Young had two hits and a walk from the leadoff spot, while Roberts had a pair of hits before his unfortunate departure from the game [fortunately, it's only a mild ankle-sprain, and he's day-to-day]. Reynolds had a walk in addition to his homer, and John Hester looked good at the plate, with a double and a single.

Audio clippage from Hinch on the errors which cost the team heavily tonight, Buckner on escaping the early jams, and Reynolds on his home-run: 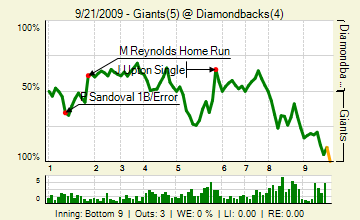 Massive Gameday Threadishness going on, though rather a lot of it seemed only tangentially connected to the game - and that's probably being kind. Still, 929 comments is not to be sneezed at, with 'Skins responsible for more than a quarter, and three-digit contributions from soco and Wailord. Down in eighth, we find, for the first time ever in the top ten...Mrs. SnakePit, thanks to her new phone. Ok, some of her comments were here re-posting my sardonic comments - two minds, but with one single wireless device! - but still, nice to see. Also present: snakecharmer, emilylovesthedbacks, kishi, 4 Corners Fan, piratedan7, NASCARbernet, AcucracK, hotclaws, AJforAZ, edbigghead, Charlie77, katers, RdRnnr, SeanMillerSavior, Azreous, victor frankenstein, PinchHitLancePainter and jazzbo13.

I guess my big surprise kinda seeped out tonight, but in case you missed the GDT - and, actually, missed the mention of it on the broadcast - before the game, I got to interview Daron Sutton and (somewhat) Mark Grace, as well as see a bit of the 'behind the scenes' of the press area at Chase. It was a highly interesting glimpse behind the televisual curtain, and I'll be posting the interviews and report when I get everything transcribed, which I hope will be later this week.