While many of the local SnakePitters gathered at Chez Soco for the Second Annual Socofest, the rest of us... had to watch the Diamondbacks lose. Again. At least they all got to hang out with each other, the rest of us just had to suffer on our own.

The game featured a pair of aces, Dan Haren against Ubaldo Jimenez, and both lived up to their hype through the first 6 innings. Jimenez's fastball was wildly effective, and Haren was working the slider for 7 strikeouts. But Haren couldn't hold a tenuous 1-0 lead, and the Rockies came from behind to win the game and the weekend series. (And no, there's nobody named Jack on either team, but I wanted the card theme, so Jason Giambi's nickname is now Jack.)

After winning with free tacos on Friday and failing in spectacular fashion last night, the Diamondbacks sent ace Dan Haren to the mound for the rubber match. Haren was solid, retiring the first 12 Rockies he faced and facing the minimum through 5 innings (courtesy of a double-play ball induced by Joe Garagiola Sr. talking about double plays in the booth). He struck out the side in the 2nd inning on his way to 7 Ks on the night. It was looking like vintage Dan Haren!

Unfortunately, it was also looking like vintage lack-of-offense from the Diamondbacks. They had opportunities to score early - two men on in the 1st and 2nd - but the only run was driven in by Dan Haren, scoring Gerardo Parra who had lead off the inning with a single. That was it for any sort of interesting game action for the next hour or so, as Jimenez settled down and both teams pretty much went down in order.

The action picked up again in the Colorado half of the 7th inning, right after NASCARburnet said: "This is a great game today." On cue, Stephen Drew booted a ball (that may have been a single anyway) and rushed to Brandon Allen who couldn't come up with the throw, and Toolo ended up at second base to start the inning. It looked like we might catch a break when the Toolo stopped at third later on, in deference to Parra's strong arm in left. This kept the double play intact, but Yorvit Torrealba tied the game with a single. Colorado took the lead on another single by Ian Stewart and a third run scored on a suicide squeeze by Clint Barmes (who was eventually thrown out at first, after he just stood at home plate for like 2 minutes). The Rockies would add two more runs in the 8th off of a Jason Giambi monster home run to right. Haren's final line - 8 innings, 5 earned runs, 2 walks, and 7 strikeouts.

The Diamondbacks "threatened" in the bottom half of the 7th with runners on the corners and two out, but Drew's little flare to right was caught. Mercifully, Daniel Cabrera pitched a scoreless inning (though allowed two hits) and the team went down in order in the 8th and 9th innings. Thus endeth the game and the season series with the Colorado Rockies. 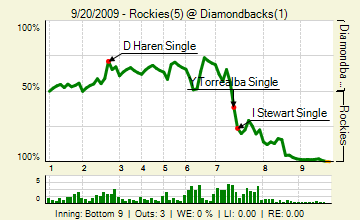 Everybody is their own Emperor of Suck today. Prepare for the rebellion.
Dan Haren (batting) was the only player above 1%.
Yes, really.

When Mark Reynolds and Justin Upton both go 0 for 4, you know it isn't going to be a high scoring game. Chris Young and Miguel Montero both went 0 for 3 as well. In fact, the only hit from the top half of the lineup was a Stephen Drew single in the 1st inning.

Pretty quiet gameday thread today, with fewer than 400 comments. Most people's focus seemed to be elsewhere. (The partygoers - each other. Me - my code.) NASCAR led the way with 64 posts, and kishi and 'Skins both topping 50. All present: soco, edbigghead, snakecharmer, Jim McLennan, AJforAZ, NASCARbernet, katers, kishi, piratedan7, DbacksSkins, 4 Corners Fan, hotclaws, Giannaros, mrssoco, emilylovesthedbacks, victor frankenstein, Wailord, and jazzbo13. We should also probably add Azreous, luckycc, mrskishi, Mrs. SnakePit, and Mr. edbigghead since they were all present at SocoFest.

Only 12 more games till the end of the season, 6 home and 6 away. Rockies fans now become Diamondbacks fans as the San Francisco Giants come to town for 3 games, and then the Padres. Let's see if we can't dash San Francisco's playoff hopes this week!