It may have been Talk Like a Pirate Day, but it was the Diamondbacks who got their timbers well and truly shivered, as the Rockies used a mix of long-ball (three homers, responsible for five runs) and plate discipline (seven walks) to leave X marking the spot at Chase. X being the Roman numeral for ten, which is the number of runs Colorado scored, y'see... Whaddya mean, it's not funny if you have to explain it?

The win gave the Rockies an additional game atop the NL wild-card standings which they gratefully accepted, and meant Max Scherzer hit double-digits in losses. Justin Upton drove in all four runs for Arizona. Details after the jump, as we ponder the great question, "Why are the tacos gone?"

We were hoping for better things out of Max Scherzer on the mound tonight, than were provided by Kevin Mulvey on Friday night. Such foolish aspiration lasted exactly three pitches, as the Rockies' leadoff hitter homered to left-center, giving Colorado a lead they would, unlike yesterday, never relinquish. Another home-run followed with two outs, insult added to injury in that it came off the bat of the near-unanimous winner of the 2009 'Pittie for "Least Liked Rockie", on the first pitch he saw. 2-0 down after the first inning? Even though the prequel ended up okay, it's not the way I like games to start.

The SS Diamondback righted itself in the bottom of the third, first-mate Justin Upton crushing a ball for his 25th home-run. It was a shot that might have challenged the laughably small and distant "Hit and Win" sign, had it been delivered an inning later - with two men aboard, thanks to singles by Scherzer and Chris Young, Arizona had the lead. It didn't last. With the bases loaded and no-one out, a sacrifice fly drove in two, thanks to Gerardo unleashing the Parrazooka from right, and throwing the ball into the Rockies dugout. The second tally went as an unearned run against Scherzer - though questions should be asked about why he wasn't apparently backing up the play.

The Rockies added an insurance run in the seventh, making the score 5-3 to them, but Arizona hit back in the eighth, Upton getting his fourth RBI of the night, when his sacrifice fly drove in Stephen Drew, who had tripled to lead off the inning - his eleventh, tying him for the NL lead. Was there to be another brave comeback win by our Diamondbacks? I trust it hardly counts as a spoiler if I say, "No." Any potential for the bottom of the ninth at least being interesting vanished in the wake of a five-run Colorado top of the inning. Four of the runs were charged to Esmerling Vasquez, but the damage was mostly done off Scott Schoeneweis, who allowed a three-run homer to Jason Giambi.

On and off the pitch, Schoeneweis has had a season he'd certainly like to forget. While one has to sympathize with him, on a cold, hard level, he's been a dismal failure as a pitcher: Six home-runs in 23 innings is positively Petitesque, with almost as many walks as strikeout (13:14) and a 7.43 ERA. The left-handed reliever has been a bit of a black hole for the Diamondbacks over the past few seasons. Since 2003, we've only had two who have thrown twenty innings with an ERA+ above leave average: Doug Slaten in 2007 and Clay Zavada this year. Daniel Schlereth seems to be the most-likely candidate for 2010, but reliability is not his middle name [actually, it's "Robert"].

Not much offense outside of Upton. Ryan Roberts and Drew each had a hit and a walk. Mark Reynolds fanned twice, bringing him to 202 on the season - second all-time, a couple behind his own mark record. I know we really don't care - and, it appears, Mark certainly doesn't. However, to put into perspective, the next highest in the majors is Ryan Howard, more than thirty back. Kinda fun to speculate where he might end up on the all-time list: through his current age, he's well down the list, not even in the top 25 (though those ahead obviously started their careers earlier). Comforting to look higher up on the list and see some awesome sluggers: it's headed by A-Rod, with Reggie Jackson and Mickey Mantle also at 650+ [Reynolds has 533 to date] 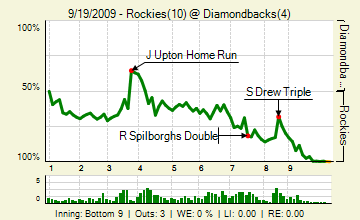 Again, a Saturday afternoon game wasn't televised here in Arizona, being supplanted on Fox Sports by the tedious endeavor of jock sports. [I'm working on an article why college sports suck. That should be fun...] Given that, 285 comments isn't bad, especially with the team again apparently doing their damnedest to suck enthusiasm for the game out of the audience by falling behind early. NASCARbernet led the way, with 'Skins and hotclaws also cracking the fifty mark. Others taking part: 4 Corners Fan, kishi, piratedan7, victor frankenstein, snakecharmer, soco, Wailord, katers, emilylovesthedbacks and txzona.

Tomorrow is Soco-Fest, so am looking forward to that enormously. Food has been prepared by Mrs. SnakePit, and I will even be pursuing the long-needed and equally-long postponed haircut before the event. I trust everyone else will be making similar efforts...