Diamondbacks 3, Dodgers 4: More an AZ loss than an LA win

Share All sharing options for: Diamondbacks 3, Dodgers 4: More an AZ loss than an LA win

Memo to Fox Sports Arizona.
a) Please do not interview opposing players after a loss. We do not care what they have to say.
b) The Batting Stance Guy is no longer amusing and should be DFA'd immediately. Show the actual winning hit in the 2001 World Series, not some imbecilic re-enactment of it.
c) When Eric Byrnes is not on the active roster, The Eric Byrnes Show should not be on the schedule.
Thank you for your co-operation in this matter.

Yeah, so I'm grumpy. This just didn't feel like it was going to the Diamondbacks' night, from the time in the first inning when they loaded the bases with no-one out, and failed to get the ball out of the infield. A couple of poor defensive plays in which Ryan Roberts was involved helped the Dodgers to score two runs, and the bullpen then walked three batters in the Apocalyptic Eighth inning, including one by Clay Zavada with the bases loaded which gave the Dodgers the lead. All this and the first ever delay of game due to a remote-controlled airplane. Well, at least it wasn't an avalanche of beach-balls, i suppse... Details after the jump.

It took Vincente Padilla 37 pitches to get through the first , and while Arizona did get the lead, we should have buried the home team. Stephen Drew and Ryan Roberts each walked; Justin Upton then spotted the third-baseman playing back, and dropped down a bunt, just good enough for his blazing speed to let him reach first. With the heart of the order up, runs were in order, but Arizona fans will be demanding a refund for tickets to the M&M Show, with both Mark Reynolds and Miguel Montero going down swinging. Gerardo Parra bounced one off the pitcher to score a run, but that was followed by the inevitable Chris Young out - one of four on the night, collect the set!

The Dodgers immediately hit back, with the inevitable event in almost any Yusmeiro Petit start - a home-run. At least it was a solo shot, and the only one in his five-inning stint, slightly below the average rate this season. Probably more irritating were how Los Angeles scored in the next two frames. A couple of bloopers to right were instrumental in the second, with the key blow - though hardly deserving the name - one by Padilla. We still might have escaped , except for Ryan Roberts triple-pumping the ball rather than getting it back in,. This let Russell Martin motor all the way from second, by the time Roberts stopped looking like he was conducting the Boston Pops and threw home.

A bunt single led off the third, and the runner then stole second. A fly-ball to right was just snagged by Upton at the fence, and he fired the Jupzooka to second to try and get the runner as he headed back. Unfortunately, there was no-one present there - it looked like Ryan Roberts should have been the man there too,since he certainly wasn't doing anything between first and second. The throw pinged off the runner into foul ground down the third-base line, and the man got back to his feet and crossed home before the Diamondbacks could regroup. It was the kind of embarrassingly-bad baseball I thought we'd left behind.

The Diamondbacks wasted opportunities in the third and fourth, in each case having a man in scoring position with one out. They finally broke through, as last night, against the LA bullpen. Pinch-hitters Rusty Ryal and John Hester  delivered RBI hits, after Montero and Parra had hung in and reached base against the lefty specialist.  There were no more runs for AZ: hope died in the eighth on a webgem by Ethier right at the top of the fence in left-center, likely robbing Brandon Allen of tying the game. And Reynolds completed a miserable 0-for-5 night, popping out in the ninth with the tying run on second.

Petit got through five innings, allowing three runs, two earned, on six hits, with no walks and a pair of strikeouts. He was actually very efficient, taking only 66 pitches to get that far, and probably could have gone another inning - yet we can hardly argue the decision to go for offence and pull him for a pinch-hitter in the sixth. Leo Rosales motored through his first four outs with gleeful abandon, then hit trouble, allowing a walk, double and intentional walk, to load the bases with one out.

Enter Clay Zavada, who walked in the go-ahead run. Aargh. that's been his Achilles heel all year, with 19 walks in 39.2 innings. However, Blaine Boyer continued his impressive run: coming in with the bases still loaded, he struck out Mandy on three straight fastballs [we enjoyed that!], and got a fly-ball for the final out. In 30.2 innings, his ERA is down to 2.05, and one wonders why the Cardinals let him go. I'm beginning to think Arizona pitching coach Mel Stottlemyre deserves some credit: it's not just Boyer who has turned around, but Jon Rauch, Esmerling Vasquez and Juan Gutierrez all appear to have improved under his tutelage. Bryan who?

However, on this night, the bullpen proved just not quite good enough, though one run in four innings is pretty effective. It was really the offense who didn't get it done tonight. They had plenty of chances, and were 4-for-14 with RISP, though two of those hits were infield ones. Upton had another three-hit night; Parra two hits and a walk; Ryal a walk in addition to his late pinch-hit; Drew, a pair of walks. For the rest, there seemed too much misplaced aggression, when taking a pitch or two would have seemed the better option. I don't want to seem like I'm picking on Roberts, yet in four PAs, he saw only nine pitches - and that included a walk.

Oh, yeah: I almost forgot to mention the small, remote-controlled airplane which buzzed around the outfield in the top of the sixth. I was quite surprised they showed it on television, because it's the kind of thing they usually don't cover, for fear of encouraging copycats. It buzzed over the outfield for several minutes, doing acrobatics and causing Mark Reynolds to step out of the batter's box. In the end, it appeared to be headed on a kamikaze mission to the D-bacs dugout; it fell just short, and Augie Ojeda pounced on it, ripped the wings off it and disposed of it. Daron Sutton was very peeved in the commentary box; Mark Grace was more amused, and I'm probably with him there, though if it becomes as omniprescent as the beach-balls, it will pose a problem... 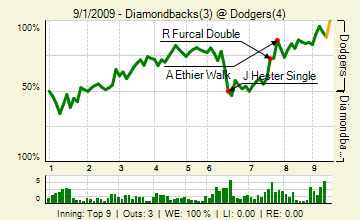 There endeth the winning streak, and the irritating thing is, as noted, how we gave this one away more than being actively beaten by the better team. We'll reconvene tomorrow and see what that brings. Perhaps some word on who the Diamondbacks will be bringing up now that rosters have expanded to 40. Mind you, it may be the case that with all the recent injuries and trades, there isn't anyone left in the minor-league system to bring up...