Share All sharing options for: Diamondbacks 5, Padres 6: J-Up in Smoke

As a baseball fan, aren't these the kind of September games you root for? Afternoon baseball between two teams fighting for superiority in their division, with the road team going for a series sweep against the team with a one-game lead on them.

All right, all right. By superiority I mean "worst superiority," as the Diamondbacks and Padres battled each other in their race for the cellar. Today's matchup featured Doug Davis against little-known Edward Mujica. Davis was looking to overcome a terrible start his last time out, and Mujica was looking to maybe make it into the fifth inning or something. But it was a certain young outfielder who stole the show, at least until an epic collapse in the ninth inning when the D-backs were just two strikes from a victory. And then...some things happened. But those and other descriptions...

From the start, this looked like standard D-backs fare. They spent the better part of the first four innings against a young, unheralded pitcher getting slapped around. Any significant threats the offense managed to mount were erased quickly: a two-out Justin Upton double in the first, a leadoff single by Upton in the fourth (popout, strikeout, caught stealing), etc. The Diamondbacks (and the Padres, for that matter) weren't helped much by a strike zone that could be described as sporadic at best, or spasmodic at worst.

Meanwhile, Doug Davis was pulling his usual vanishing act, continuing his quest to replace Houdini (or Criss Angel for you damn youngsters) as the world's top illusionist. He worked around a leadoff single in the first by striking out a couple of batters. He danced around danger in the second, when his own error put runners on second and third with two out. The slew of baserunners caught up to him in the third, though, when Everth Cabrera and Tony Gwynn reached on consecutive hits. After a flyout advanced Cabrera to third, he scored on a routine grounder by Chase Headley to make it 1-0 Padres.

The Diamondbacks finally broke through against Mujica in the fifth to take the lead. Brandon Allen slapped a base hit to right with one out, and scored on an Augie Ojeda triple (it should be noted that it was Augie's first-ever career hit at Petco Park; he'd been 0-for-34 to that point) that probably raised his slugging about 900 points. With one out and a runner at third, Davis did what he usually does when I recap his starts and he's up with RISP -- fail miserably. But Chris Young stepped up and delivered a huge two-out double to plate Ojeda and give the Diamondbacks a 2-0 lead. That chased Mujica after just 73 pitches, right about where he was supposed to be. Arizona tacked on one more run in the sixth after Upton (notice a trend?) tripled to start off the inning, and scored on Miguel Montero's little groundout that Webb -- no, not that one -- threw away.

Davis continued his roller coaster ride by walking the leadoff man in each of his next three innings. The first two times he got away unscathed (a bunt moved the runner over in the fourth, but he got two quick outs to get out of it, and a double play erased the leadoff man in the fifth), but again he got caught trying to get through the sixth. After a free pass to Henry Blanco, Davis plunked Macias with a pitch, and Durango reached on what appeared to be an attempt at a sac bunt. Just like that, bases loaded and nobody out. This time, Davis gave up a base knock to left that was hit sharply enough to only score one run, and though he got Cabrera to groundout into a force at home, Gwynn slapped a sac fly into right that even Upton couldn't do enough with to keep the tying run from scoring.

With a fresh start for both teams and just three innings to go, the Diamondbacks answered back in a hurry, starting with the top of the order. Young reached on an error by Cabrera, and Stephen Drew followed him with a base on balls. Justin "F'in" Upton drove in the go-ahead run with an opposite-field base hit, his fourth of the game. After Montero reached on a little base hit up the middle, Reynolds grounded out deep enough to score Drew from third, and it was 5-3 Arizona just like that.

Of course, the problem with insurance runs is that sometimes you can't afford enough insurance (insert health care debate joke here). After a couple of uneventful frames, Esmerling Vasquez came in to close things out in the ninth with a two-run lead. Nerves were frayed a bit after a leadoff single, but he got two pretty quick outs from the 3-4 hitters (granted, the Padres' 3-4 hitters) and it looked like things were under control. And then Adrian Gonzalez happened. He roped an 0-1 fastball down the opposite-field line for a two-run shot that tied up the game and gave the Fangraph a small heart attack.

From there, it seemed like our fate was inevitable. The D-backs went down in order in the top of the 10th, and Yusmeiro Petit was brought in for the bottom half -- no, I don't understand it either. Petit labored through just three hitters -- a leadoff single, a 50-pitch at-bat by David Eckstein that ended in a flyout, a stolen base, and a base hit that finally ended it. And yet, I felt nothing. Such are the doldrums of 20-games-under-.500 September baseball. 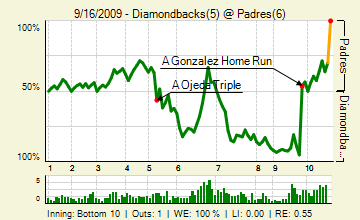 This is one of the cases where the Fangraph (and the contributions of those involved) makes perfect sense. Upton was a perfect 5-5 on the day, just a homer short of the cycle. Young .drove in the go-ahead run at the time and had another solid game. Meanwhile, Vasquez's spot should come as a surprise to no one, and Petit -- well, he's Petit. End of story.

For the Diamondbacks, Upton's success has already been well documented. Young had a couple of hits and a walk; Allen added a couple of walks and a hit. Ojeda finally broke out of his slump at Petco and added a free pass of his own. It should also be noted that although Reynolds was 0-for-5 with 4 Ks (reaching the 200 strikeout plateau), he did manage to drive in a run and steal his 24th bag of the year. He's on the cusp of the 45-25 club, which is pretty exclusive territory. Zavada and Rosales each picked up holds for solid work in the innings before Vasquez's meltdown, and Schoeneweis lowered his ERA 11 points for retiring the one batter he faced.

It's an off day tomorrow, which should give ample time to drink away this loss. Or at least forget about through other more natural means (like head trauma?). Next up, it's a three-game set at home against the Colorado Rockies; maybe this awful loss is just to make us winning the weekend series that much more heart-breaking for them. Yeah, that's it.