Much like last night, through eight innings of this game, the entire Diamondbacks' offense was from a highly-surprising source. Tonight, it was Eric Byrnes, who jacked one out of Petco in the third and then drove in Brandon Allen with a double of the wall in the seventh - which ended up being one of the more bizarre plays you'll see all season. With Dan Haren keeping San Diego in check, that was enough to keep us in the game until the ninth. Then, Mark Reynolds clubbed his 42nd home-run of the year, a two-run shot, and "closer even though we don't have one," Juan Gutierrez mopped up in the ninth, around a two-out double.

Yeah, I was tempted to go for a cheesy headline like "Eric Byrnes the Padres". I trust my restraint in this matter is appreciated. Details of the win, which guarantees us at least a split of the season series against San Diego, with four left to play, after the jump.

No free tacos - or, as we Arizona fans say, business as usual. The team racked up their sixteenth straight game scoring five runs or less tonight: that streaj now trails only the Royals' run of 17 in the majors this season. The last time Taco Bell were trouble by the Diamondbacks was all the way back at SnakePitFest, on August 29th [which, I just realized, was also Jon Garland's last start for the team]. Never mind getting hits with runners in scoring position, they only had one at-bat with a man in scoring position tonight, Chris Young flying out to deep center, ending the fifth inning on a 3-0 pitch.

Given that, scoring four runs is quite an impressive achievement. Things started quietly: our first seven batters were retired in order before Byrnes connected and drove it off the face of the third-floor balcony in left - his first home-run, and also his first RBI, since June 18th. The Padres took the lead back in the bottom of the fourth, on a combination of timely hitting and aggressive base-running, using three hits, a sacrifice from 37-HR man Adrian Gonzalez and a sacrifice fly to score two runs. The score stayed that way through six innings, Arizona making another left-hander look like Cy Young [if Cy Young had been a left-hander. Playing for San Diego. And still alive. Oh, whatever....]

With two outs in the seventh, Allen just beat out an infield hit on a high chopper, and Byrnes then scalded the ball off the wall in deep left-center. Allen scored fairly easily, but the throw caromed off the Padres' catcher and ricocheted away to near the visitor's dugout. Byrnes advanced to third, and as the catcher made a heroic effort to stop the ball going down the steps, tried to get home. The catcher short-hopped the ball back to the plate, where Gonzalez somehow fielded it and tagged one of the mass of flailing limbs which was Byrnes arriving at home. Really: mere words can't do it justice. I'm sure it'll be on all the highlight reels.

I can't blame Byrnes for trying to score from third, with Haren due up at the plate and two out. However, at the time, it had the feeling of a game-changing play, with momentum updating its Facebook and proclaiming its undying love for Shamu and Tawny Kitaen. However, out starter continued to lock down San Diego, retiring their batters in order, for both the seventh and eighth inning, until Reynolds gave us the lead for good.  [He seems to like Petco - he has more HR there than any other road park bar Coors] That helped Haren's own cause, giving him his 14th win of the season - the first W for a starter in almost two weeks. He reduced his season ERA to 2.79, allowing five hits and a walk in eight innings, striking out four batters, and outside of the fourth was imperial.

Not much doing offensively, especially while Wade LeBlanc was in the game. Byrnes and Allen were the only Arizona batters to do much, each getting a pair of hits. Young had the only walk, while there were ten strikeouts for the Diamondbacks. Stephen Drew did extend his hitting streak to eight games with an eighth-inning single, but the someone appears to have flicked the switch on the uber-streaky Ryan Roberts. His September average is down to .152 - his monthly numbers this year have been anywhere from .098 to .396. Miguel Montero had a single just before Reynolds' homer, which kept his average above .300 and also ahead of Justin Upton.

And if anyone thinks the Diamondbacks have attendance problems... The game tonight was watched by just 14,790  - it's the 29th home-game this season at Petco where the crowd has been below twenty thousand, including seven of the last eight. I dread to think what tomorrow's day-game will bring, but the stadium low of 13,646, set on May 5th this year against the Rockies, could be threatened. 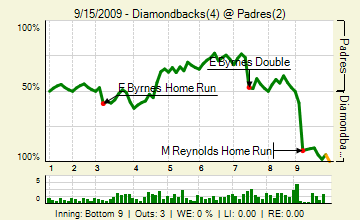 A light Gameday Thread, just shy of 200 comments. My participation was limited by the arrival of SnakePit Jr - so I knew that if I left the room for more than ten seconds, the remote-control would be snatched with a cry of "You're not watching it!" pygalgia topped the charts, just ahead of NASCARbernet: also present were ol Pete, jobu doll, DbacksSkins, kishi, hotclaws, snakecharmer, katers, marionette, soco, GuruB, SaveUsY2J and Azreous, as we locked down our first series victory of the month, at the fifth attempt. Now, let's go for the sweep tomorrow - as noted above, it's a day-game, first pitch at 12:35pm Arizona time.

One tidbit of note. It seems the Diamondbacks are favoring the Giants in the wild-card race. Dan Haren is being kept on his usual schedule, and so will face the Rockies at Coors on Sunday - Thursday's off-day means that would normally be Billy Buckner's day to pitch, but he is being bumped to Monday's game...against the Giants. Think the Rockies will be pleased by this tidbit? Especially after losing another game to San Francisco tonight, meaning they are only 2.5 ahead now. If the Giants were to take tomorrow's finale, then the gap would be only 1.5 for the weekend series, where we play Colorado and San Francisco travel to Los Angeles.

We may not be the central characters in this drama as it unfolds, but we still have a pivotal role  to play - hero's best friend, or maybe villainous associate with a deeply-buried conscience...