Share All sharing options for: Diamondbacks 4, Padres 2: Same old Diamondba... What? We won?

Jean-Paul Sartre said, "Once you hear the details of victory, it is hard to distinguish it from a defeat." I think he must have been at tonight's game, where the details certainly matched those from our recent streak of futility: Arizona's offense continued to struggle, and the bullpen blew another lead. However, there was a happier ending for the Diamondbacks this time, as we scored two runs in the tenth, and held on to win.

Yes: "win". I don't quite know what to do: it's the first time this month that I've got to write the recap for a victory, because the previous two (count 'em: 2) wins in September both came on Azreous nights. I may have to turn my thesaurus away from the pages marked "futile" and "embarrassing," though this performance was hardly an overpowering display of baseball awesome. Still, it beats the alternative. Details of the victory [accomplishment, achievement, conquest, success, triumph] after the jump.

Based on his outings since Billy Buckner added the cut-fastball to his repertoire and returned to the majors at the start of September, it seems like he might be a decent candidate for the back-end of the rotation in 2010. Over those three starts, here's his combined line:

The hits are a little high, but that may just be down to his stamina needing to be worked on a bit - of tonight's nine allowed, for example, the majority came over the final three outs, as he obviously flagged atfer his pitch-count started getting up to 90 or so [I was surprised how long AJ Hinch left it before getting someone up in the bullpen and, as you'll see, how long he was left in]

Up until that sixth, the Padres had only one man get past second, but they strung together four singles, albeit nothing particularly hard-hit. That ended Buckner's shutout and loaded the bases, putting the tying run on third with one out. Truth be told, it should have been a tied game but the runner on second badly misread a bloop to single, which Chris Young missed catching by, oh, 30-40 feet. San Diego were made to pay for that gaffe, as the next hitter popped out to shallow right on the first pitch, and Buckner fielded a comebacker himself to escape the inning. A great night's work: take a seat, Billy, the bullpen will take it from here.

Apparently not. I was frankly astonished to see Billy come out for the seventh, but what undid us was less his arm [even if he delivered two pitches and two men reached], more other issues. First pitch, grounder to third - Special K threw up the line, and the hitter avoided the tag. Next one, a bunt - Buckner short-hopped Brandon Allen and everyone was safe there. After Scott Schoeneweis hit a Padre to load the bases, Reynolds tried to go round the horn on a ground-ball, when he might have been better-off stepping on the bag at third and throwing to first. The batter beat the throw to first, the run scored, ensuring for the eleventh straight game, there'd be no W for an Arizona starter.

I have to say, Hinch's recent bullpen decisions seem to make it look like Tankapalooza 2009 is in full effect. Defending a one-run lead yesterday, he sent in Daniel Schlereth; today, he opted for Scott Schoeneweis, who hasn't got people out since before the All-Star break - a second-half ERA of 14.29, with an opponents' OBP of .500 over that time. Not really the person you want to defend a one-run lead, when there are no outs and the tying run in scoring position. A walk and a hit batter followed, maintaining that average, and he was helped by a BuntFAIL strikeout (one of two by Tony Gwynn Jr), before Esmerling Vasquez was summoned and got the next four outs.

However, keeping the offense to two runs in nine innings should win most games. Just not when matched by the ongoing Diamondbacks' streak of non-fast food producing (free variety) offense. It's now been 15 games since we scored six runs - a tacoless spell surpassed only once in franchise history, over the first sixteen contests in May 2007. Up until Allen singled to center in the tenth, the only hit Arizona had with runners in scoring position came from Buckner, who drove in all/both of our regular-inning runs with a single in the second. Overall, the visiting team were 2-for-13 with RISP.

Which is odd, as the team hit a respectable .279 overall, ending with a dozen hits. After a wobbly couple of bats at the top of the order, Chris Young seemed to settle down, getting two hits and a walk. Reynolds had a pair of hits and Gerardo Parra got three, while Justin Upton and Allen each had a hit and a walk. Credit also Alex Romero, who drove in a welcome insurance run in the tenth, grounding out nicely to get the runner home from third with one out. Juan Gutierrez then closed out the game with no problem, retiring the Padres in order. 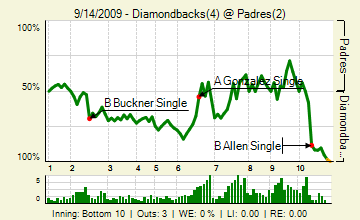 More of a grind than anything else, but a victory nonetheless, and it can only be appreciated as such. The focus of the world [at least, the baseball-playing part of it. That doesn't watch ESPN], anyway may be on the Dodgers-Rockies-Giants thing - but what we care about is passing the Padres and getting the respectability that can only come with having someone in your division that has a worse record. Tonight helped, mostly thanks to solid pitching from Buckner and the bullpen not named "Scott". Tomorrow, hopefully the offense will take over.