Diamondbacks 3, Brewers 5: In which Daniel Schlereth lives up to his family nickname

Share All sharing options for: Diamondbacks 3, Brewers 5: In which Daniel Schlereth lives up to his family nickname

Is the season over yet? I'll tell you how bad this was. I found myself turning over to the Cardinals game during the commercials, a decision which has Chris sarcastically asking, "Are you going to start an AZ CardinalsPit?" I was happy to assure her this wasn't the case - I leave such things to the far-better qualified Revenge of the Birds - but it shows you how difficult this baseball team is making it to sustain enthusiasm.

With a couple of honorable exceptions - today, led by Max Scherzer, who gave the team six very solid innings - the Diamondbacks appear to have booked their tee times and are barely doing any more than showing up. The team dropped their ninth game in the last ten contests, this time undone by a disastrous seventh inning from Daniel Schlereth - son of former NFL player, Mark 'Stink' Schlereth - which turned the slimmest of Arizona leads into a three-run advantage for Milwaukee.

The offense turned in another lackluster performance - although they managed three hits with runners in scoring position, they wasted a number of opportunities to post big innings, and paid for it. The sweep means the team are now twenty games below .500 for the first time since the end of the 2004 season. Details? If you must.

I have been severely underwhelmed by Schlereth and his performances in the major-leagues this season. While his curve-ball has the potential to be devastating - just ask Manny Ramirez - he seems to lack any semblance of control, with eleven walks in only 12.1 innings, a completely unacceptable rate. Today, while he was the victim of some seeing-eye singles, the bottom line is, he retired only two of eight batters faced - five hits and a walk, led to four earned runs and a season ERA of 8.76. Putting him into close games has backfired on multiple occasions: he's now the first reliever since Vic Darensbourg in 1998 to get four losses in his first sixteen career appearances.

However, the Diamondbacks offense has to accept its fair share of responsibility, squandering not one or two, but three bases-loaded situations, two of them presenting themselves with only one down. Scherzer grounded out in the second - somewhat understandable, being the pitcher, so we can cut him some slack. Not so much for Ryan Roberts, who hit into an easy double-play to end the fourth; then, in the seventh, with bags again juiced and one out, Reynolds popped up to the infield, and Chris Young stared at strike three, though the pitcher might have got the benefit of some doubt there.

This has been an issue for Arizona all season, a subset of their league-worst average .238 when hitting with men in scoring position. The Diamondbacks' line with the bases loaded in 2009 is now .215/.288/.347, an OPS of only .635, which is almost a hundred points below the National League average. Young and Reynolds - the culprits in the seventh - have combined to go 1-for-18, and have struggled almost as much in such situations, over their entire career. Mark is hitting .154 and Chris  .158, though we are talking a small sample size, fractionally below forty at-bats for each player.

About the best thing to come out of the game was a solid-enough outing from Max Scherzer, despite a slider which resembled a hovercraft more than anything else. There were some hard-hit balls, but the final line was six innings of three-hit ball, with the only damage a solo homer to the heavily-tofu'd one - and that hardly puts him into disgraced company. It brings Max to a total of exactly 160 innings for the year; having thrown 133 last season (56 majors; 54 minors; 24 Arizona Fall League), that may be it. Generally, you don't increase young pitchers' workload by more than thirty innings

Max's 160 IP should probably be seen as 'more' than that in terms of stress, because he throws more pitches per opposing hitter than just about anyone else. He came into today's start with a number of 4.08 per PA, trailing only Clayton Kershaw (a monstrous 4.28) in the majors. Overall, he has thrown a total of 2,845 pitches, which would be the equivalent of almost 173 innings, at the league average of 16.5 pitches per frame. Absolutely no point in risking him in meaningless games down the stretch, so if I were AJ Hinch, I'd shake Max (gently) by the hand, and send him off home to rest up for 2010.

Seven hits and six walks scattered among the Diamondbacks - no-one had more than one of each. Reynolds, Rusty Ryal and John Hester had a hit and a walk. Young did the early damage, his two-run homer in the fourth quickly countering the Brewers' long-ball - if he can rediscover and keep his power-stroke for next year, we can probably cope with him hitting .230 or so. Interesting note on the broadcast, where they pointed out that Mike Cameron, often compared to Young, struggled even more badly in his age 25 season. Cameron's OPS+ that year was just 63, well below CY (76 coming into today) - however, he has been above 100, every one of the eleven seasons since. 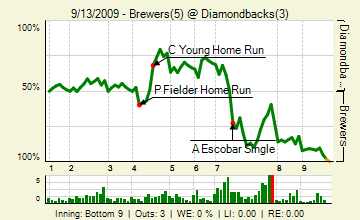 We have a tie at the top of the commentors charts today, myself and NASCARbernet both posting exactly 60. Mind you, a bunch of his/her comments were about the Cardinals, so I'm disqualifying those and claiming victory. Woo-hoo! It's good to be the King... :-) Also present(ish): emilylovesthedbacks, hotclaws, kishi, katers, unnamedDBacksfan, ol Pete, snakecharmer, Wailord, Counsellmember, SaveUsY2J, AcucracK and 4 Corners Fan. Frankly, as the run of Arizona futility continued, I'm surprised anyone showed up at all - and the same goes for the ballpark, where only 21,453 were there. I suspect the debut of the NFC champion Cardinals affected that, but they lost, so I expect the local bandwagoners to be leaping off post-haste.