The ongoing series of open tryouts for the fourth and fifth spot in the Diamondbacks' rotation continued today, as we saw prospective candidates Kevin Mulvey, Bryan Augestein and Daniel Cabrera. However, going by the overall results tonight, one wonders whether their best bet for 2010 might be a new reality show on Fox Sports Arizona, entitled America's Got Pitching Talent. Eric Byrnes could host it, from shopping malls all across the United States: a man, a radar-gun and a contract.

Hey, it worked in India. More PitchingFAIL can be found after the jump. I blame Wailord:

excited to see how Mulvey will do in his debut today? I’m feeling a perfect game with 22K’s.

Saturday was also Hispanic Heritage Night at Chase Field, going by the "Los Dbacks" jerseys - but I think the the team got them from Washington's supplier, and there was simply a letter missing. Because, for the second consecutive night, the Arizona starter got shelled, allowing the Brewers to take a 5-0 lead after three innings. And stop me if you've also heard this one before, but when the starter finally got yanked off the mound, his replacement managed to wriggle out of a bases-loaded, no outs jam without anyone else scoring.

However, the three runs allowed by Bryan Augenstein next inning kinda destroyed any illusion of competency there. Indeed, the only one to come out with any credibility was Daniel Cabrera - yes, he of the infamous "0 IP, 5 ER" debut for the Diamondbacks. This time, he was better, albeit in mop-up work, with three scoreless innings, on two hits and a wild-pitch - reducing his ERA with us from infinity to just 15.00. With the game not televised here in Arizona (frankly, this probably prevented a number of calls to 911, from fans who had jabbed red-hot objects into their eyes), hard to say if he was doing anything different, or the Brewers' hitters were just tired from running the bases.

Similarly, hard to say much about Mulvey's starting debut: according to ol Pete in the comments, "A lot of soft stuff - loved the 2 seamer that broke in on RHers. Could be a bottom of the rotation guy with a bit more control and just a better night." The box-score, however, is not one Mrs. Mulvey will cut out, place in an attractive frame, and hang over the fire-place. Before this weekend, Arizona starters had allowed 11+ hits over four or less innings, three times in franchise history [Omar Daal in 1998, Robert Ellis in 2001 and Livan Hernandez in 2007]. But it's now happened twice in a row; Milwaukee went 11-for-23 off Mulvey, with six earned runs in four IP tonight.

The offense didn't make any real effort to dig the team out of the hole in which Mulvey and Augenstein had placed them. The Diamondbacks came within one out of going another game hitless with runners in scoring position, before Chris Young singled home Luke Carlin in the bottom of the ninth. That was one of two hits for Young, who could quite conceivably be the best player in the National League over the past week, having gone 8-for-21 with five home-runs. It also gets his season average up to .202 - it's been any higher after only six games since April.

Stephen Drew and Miguel Montero also had a pair of hits each, the former finally getting Arizona on the scoreboard in the sixth inning. He got his tenth triple of the year, and is the only player in the majors to reach double-figures there in both of the past two years [Carl Crawford and Curtis Granderson need three more triples to join Drew]. Montero's two hits raised his 2009 average to .306, which is the best on the Diamondbacks - something I think I can safely say no-one saw coming. He's the sole catcher in the NL with 400+ PAs who's hitting above .300. Slim comfort on a day like today, yet you take it where you can. 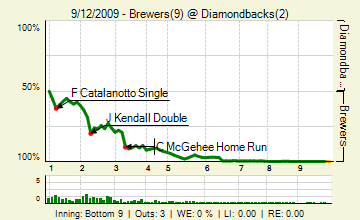 That graph looks distressingly similar to last night's, with the flat-line in bold for added emphasis. It's perhaps the closest I've seen to no Diamondback being in positive territory - the only other one save Young was Cabrera, at a monstrous +0.2%. However, oddly - or perhaps not - this did not stop a lively and varied Gameday Thread, where the game was more one of the side features, again, not helped by its unavailability to anyone in Arizona.

Finally, a random aside. While looking up a link, I found this paragraph from the New York Times of October 1905: "Ostensibly because the grounds were wet, but in reality because the gate receipts did not look large enough to the contending baseball players, the third contest of the world's championship series between the Giants and the Athletics, which was to have been decided in Philadelphia to-day, was postponed until to-morrow." Wow. And we accuse moden players of being mercenary...