U.S. Army Staff Sgt. Jacquelyn Smith stands on the pitcher's mound for a ceremonial silent first pitch to commemorate those lost in the 9/11 terrorist attack before the start of tonight's game.  Sgt. Smith was stationed at the Pentagon on 9/11 when the plane struck the building.

Gee, thanks for nothing, Diamondbacks. I finally get my life aligned with the schedule, and how do you repay me? With the Brewers hitting Doug Davis at a .579 clip. That's really all you need to know about tonight's contest: only once in the past 20 years, has a team won after their starter has been yanked after allowing 11 hits in three innings. Tonight, was not #2 Even a miraculous escape by Leo Rosales - he came in with no-out in the third, the bases loaded, and refused to surrender a run - couldn't help Arizona. We did get the tying run on base on the sixth, but couldn't get the big two-out hit when we needed it.

Doug Davis tied a season-worst performance in the National League, becoming the third starting pitcher this year to allow eleven hits while retiring only nine batters. The last to accomplish this anti-feat was Pittsburgh's Zach Duke, who did it less than two weeks ago, curiously, against these self-same Brewers. Never a good sign when the opposition starts by getting more hits than they make outs, and Milwaukee jumped ahead 2-0 in the first on a Braun homer, one of four hits in the opening frame.

A 1-2-3 second for Davis gave cause for optimism that he might have settled down. Such hopes were cruelly dashed by three hits and two runs in the third, and four straight singles to open the fourth inning saw manager AJ Hinch make the call to the bullpen, with his team now down 5-0. Much credit to Rosales, who stopped the game from becoming a complete blow-out, keeping the ball in the infieled, by getting the next three hitters to deliver a pair of come-backers to the mound and a line-out.

He allowed a run in the next, but the bullpen certainly did their part, allowing only that one run in six innings of work, on two hits and a walk. Nice to see Scott Schoeneweis back on the mound and pitching effectively, allowing a walk in an otherwise clean ninth. Yusmeiro Petit and Daniel Schlereth were the other standouts, each retiring the three batters they faced in the sixth and seventh. Esmerling Vasquez was the beneficiary of a smart play by Brandon Allen in the eighth. After a lead-off double, the runner tried for third on a grounder in front of him to short, but after Allen got the throw at first, he fired a strike to Mark Reynolds for the double-play.

Meanwhile, the Diamondbacks were having difficulty solving Brandon Looper, who fired first-pitch strikes to 21 of the 25 batters he faced. We had our opportunities, but our ineffectiveness with runners in scoring position continued - we were hitless in four such chances while Looper was in the game, and all we had to show for the first five innings was a single run, on an RBI double from Parra. Coming in to the bottom of the sixth 6-1 down, we finally broke through: Justin Upton homered to lead things off, we added another run against the Reds bullpen, then loaded the bases, but Ryan Roberts grounded out. He went 0-for-5, and is 5-for-35 since the last game in August.

He was the only starting position player without a hit, and we did reach eleven in total, a healthy .306 clip on the night. There was a pair each for Upton, Reynolds, Parra and Allen, while Chris Young had a hit and a walk. He inched ever so minutely closer to the Uecker Line, where he hasn't been since July - his season average is now .1989. Yep, I'm including four decimal points there. Going the other way is Eric Byrnes, who popped out as a pinch-hitter, and is 1-for-11 since his return. His season average of .210 is now the lowest it's been since May 27.

Arizona still persists in helping the opposition out, by making stupid mistakes. In the seventh, Upton hit one into the hole at shortstop, and the throw to first short-hopped Fielder, getting past him. Upton headed for second, and got there - but then overslid the bag by about three feet, giving the Brewers an out they didn't deserve - instead of a man on second (or, at least, first) with one out, the bases were empty with two out. Of course,  Reynolds, next  man up, hits a double which would have scored Upton. 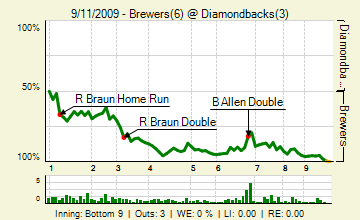 Pretty laid-back as Gameday Threads go, the early struggles of our starter sapping a lot of enthusiasm from the participants, for obvious reasons. Missing a few of the usual regulars too, who made the wise decision to do something else on a Friday - frankly, anything, short of setting animals on fire, would have made sense. You know it's a bad game when I lead the comment totals: it's been a while, but I just pipped pygalgia and hotclaws 49-48-46. Also present: snakecharmer, NotGuilty, ol Pete, Muu, Clefo, IHateSouthBend, Wailord, kishi, katers and NASCARbernet.

One thing worth mentioning was the presence of Luis Gonzalez in the commentary booth, replacing Mark Grace as he did his usual weekend stint with Fox. It seemed at times like he had to be prodded into speaking by Daron Sutton, but he offered some useful insights into the game - however, I'm sure he'll get more polished with practice, and he has a relaxed approach which is pretty soothing.