The Diamondbacks headed into tonight's matchup with the Dodgers looking for something, anything to take as a positive. Six straight losses (including a particularly bad one last night, with a three-run lead in the eighth) had the D-backs in sole possession of last place. Just to add to the confusion, their old buddy Jon Garland toed the rubber against Dan Haren in tonight's series finale. Neither starter ended up being a factor in the decision, and a closely contested game ended with perhaps the most anticlimactic way possible (unless you like waiting two seconds to see if an overweight guy raises his arm or not).

Dreadlocks and base knocks after the jump...

Haren got into trouble in the first inning, and paid the price. Rafael Furcal slapped a leadoff triple to right to put the pressure on from the start. Haren came back to strike out Matt Kemp and Andre Ethier, but couldn't get around Manny Ramirez, who drove Furcal in with a base hit (really, more of a grounder that took a bad bounce). It seemed like one of those hard-luck runs that Haren eats sometimes -- he stopped the Dodgers from getting a runner on third in with less than two outs (twice), but ended up getting charged with a run.

The Diamondbacks didn't waste much time erasing that small deficit. After a Justin Upton walk was the lone highlight of the first, Miguel Montero and Chris Young started the second by smacking homers into the right-field seats. Montero's was a no-doubter, and Young continued his recent power surge with an opposite-field bomb of his own. Of course, this was business as usual for Garland at Chase Field, but this time he was wearing somebody else's uniform instead.

Haren settled in for the next two frames, setting down the side in order both times and striking out three in the process. But the Dodgers answered with back-to-back jacks of their own in the fourth. Manny crushed a ball to opposite field, and James Loney followed with a no-doubter into right center that quickly gave L.A. a 3-2 lead. The solo shot has been a bit of an anathema for Haren this year:

Arizona tied the game up in the fifth thanks to back-to-back singles and a rare success getting a runner in from scoring position. Ryan Roberts and Stephen Drew used those consecutive hits to put runners on the corners with nobody out, and Justin Upton grounded out deep enough to let Roberts score from third and make it a 3-3 game.

Meanwhile, Haren went right back to work. He set down the side in order in the fifth (striking out two), worked around a Manny walk in the sixth (striking out two more), and an Orlando Hudson bloop single was his only blemish in the seventh. Sitting at 105 pitches, Haren came back out for the eighth and got a Ronnie Belliard groundout to start the inning, but back-to-back base hits by Kemp and Ethier chased Haren at the 119 mark. Juan Gutierrez came in faced with a bit of a situation: two on, one out, and the wrecking crew of Manny and Loney due up. But it didn't faze him -- he gave Manny four heaters, then threw three nasty breaking pitches to Loney to strike them both out and get Haren off the hook. The two starters ended up with lines that looked like this:

Seems like what we've come to expect from the two of them, right?

Heading into the ninth, the stage was set for a Diamondbacks walkoff, but the inning didn't look like it was going to start that way. Gerardo Parra hit a weak little grounder up the middle that pitcher Ramon Troncoso fielded, but threw away, allowing Parra to make it into second. Trent Oeltjen (pause for the ladies to sigh dreamily) came in to pinch run, and moved over to third on a sac bunt by Ryan Roberts. Because Joe Torre is weird, he intentionally walked both Drew and Upton to load the bases for Mark Reynolds (yes, this sets up the force at home as well as other double play options, but still). After having his pitcher throw eight straight BP fastballs outside, Troncoso labored through eight for-real-real fastballs in his battle with Reynolds. Reynolds laid off a 1-2 pitch that was just off the plate, and might've gotten lucky on the second 2-2 pitch (it was close, and he might've gone around checking his swing). Still, Special K fouled off one pitch with a full count, then watched one last fastball miss outside to get the infamous walkoff walk. Oeltjen trotted home, the losing streak was over, and a sweep at the hands of the dreaded Dodgers was averted. 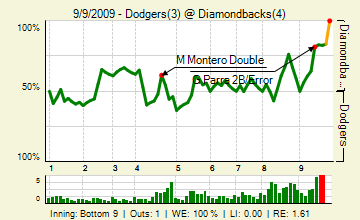 Montero set the pace again offensively, raising his average to .304 in the process. Gutierrez deserves solid marks for his work in the eighth, and Reynolds' positive ranking should come as no surprise given the outcome. On the flip side, Byrnes was terrible again (and was booed after his last at-bat), and Chris Young's at-bats where he didn't homer were largely unsuccessful.

For the Diamondbacks, Montero had a huge game: a triple short of the cycle, and he reached base all four times. Upton and Reynolds had a pair of walks, and Mark added a hit as well. Drew reached twice on a base knock and a base on balls. For the Dodgers, some douchebag in dreadlocks was the only batter to get on base more than once.

It's always fun getting a win against a divisional rival with a ninth-inning walkoff where you don't even get a hit. Error, walk, walk, walk -- maybe it's not how you dream it up in your backyard when you're a kid, but the win counts in the standings just the same.

Being the thorough journalist that I am, sources close to the team a couple of my friends who went to the game reported that a fight broke out between some Dodgers fans a few rows behind them -- a pair of couples who apparently couldn't get along. At one point, the females went after each other, and one got hit with a mini bat and bled so bad she had to be taken out of the section. Unfortunately, Dave and Andy wasn't able to get any pictures, but the mental image is good enough for me.

Off day tomorrow (get used to that line in these Wednesday recaps from this point on) before a three-game set at home against the Brewers, who still have an outside shot at the playoffs. The quest for .500 is still very much alive; sure, we have to finish 19-2, but if the Rockies can do something like that, anybody can.

[Edit: audio clippage from Dan on his outing and facing Manny, while Mark talks about what might be his most patient non-AB of the year]