This season, teams have a record of only 19-57 when their starting pitcher gives up three homers in a game. Well, guess you can make that 20-57 now. While Doug Davis didn't exactly pitch badly, and the three long balls he allowed were all solo shots, it looked likely that he would be on the hook for the loss, leaving the game after six innings with Los Angeles ahead of Arizona 3-2.

However, Justin Upton tied the game up, courtesy of a solo homer with one man down in the eighth, and Rusty Ryal then gave us the lead with another long-ball, leading off the tenth. But if I had to hazard a guess as to who would be the master of his domain, it'd be Augie Ojeda. He had three hits, including a two-run double in the second, and drove in a very welcome insurance run with a bases-loaded walk in the tenth.

Things were, inevitably, overshadowed by the trading of Jon Garland to Los Angeles. Details on that below - after the game, we'll stick to tonight's contest.

Where are your 2009 Diamondbacks, and what have you done with them? For that's only the second time this season we have won games on consecutive nights where the opposition has sent a left-hander out against us - the previous occasion was June 11-12, when we faced the greatest pitcher in the NL West (that'd be Jonathan Sanchez) and Mike Hampton. With all due respect to those two - and that'd be "not very much" - doing so against Wandy Rodriguez (season ERA+ 143) and Randy Wolf (129) is a bit more impressive.

Admittedly, today, the offense did most of the damage against the bullpen. Wolf restricted us to five singles and Augie's double in his six innings of work, striking out seven Diamondbacks. The only damage done was in the second, when Ojeda ruthlessly exposed the defensive inadequacies of the Dodgers' left-fielder - no-one you've ever heard of I'm sure. The route taken by said fielder toward Augie's liner was apparently plotted by a drunken gerbil with a sprained ankle, allowing Chris Young and Miguel Montero to score. We'd have one at-bat with a runner in scoring position the rest of the way against Wolf.

Fortunately, Davis was doing a fairly good job of keeping the Dodgers in check, at least through the earlier frames. Of course, there was the usual parade of base-runners for Doug to work with, such as a leadoff double in the third inning. However, he had allowed only three hits and a pair of walks over the front five innings, so traffic on the bags was relatively light by usual standards - normally, he'd allow 7.21 base-runners over that time. Thanks to Augie's offensive output we reached the middle of the sixth 2-1 up.

I did sense the inning could be trouble, with Mandy leading off and Kemp behind him - combined, they were 19-for-43 lifetime against Davis, a .442 clip, coming into tonight. That said, even I didn't expect them to deliver back-to-back homers, turning the Diamondbacks' lead into a deficit in just three pitches. Davis did retire the next three batters, giving him a quality start: six innings, three earned runs on five hits and two walks. That's his 19th QS in 28 outings, a 68% rate - pretty good, since league average is barely over 50/50.

It was around this point that the trade rumblings surrounding Garland began to surface, and I think most of our attention was focused on these through the seventh. It was until Upton got his 23rd home-run of the year, another no-doubter to left-center, that we noticed the game was still on. Fortunately, the bullpen had not been distracted by such trifles, with Blaine Boyer, Daniel Schlereth, Esmerling Vasquez and closer-for-today Juan Gutierrez retiring all 12 LA hitters faced. Schlereth had a particularly beautiful strikeout of Mandy. We all enjoyed that a lot.

After Ryal's solo shot gave Arizona the lead to start off the tenth, the Diamondbacks had a really good chance to pile on, loading up the bases with no-one out. The Dodgers intentionally walked Miguel Montero to get to Chris Young, and the results showed why that was a wise move, Young striking out and looking horrible doing it. While he got a hit his first time up, and did walk, he was also fanned three times - since his return, he's 1-for-10 with five strikeouts. Gerardo Parra popped up on the infield, going after the first pitch, but Ojeda completed a fine night, reaching base for the fourth time with an RBI walk.

Outside of Ojeda's three hits and a walk, Justin Upton had three hits and a walk. He's clearly fully recovered from his trip to the DL, being 12-for-25 with three home-runs after coming back on August 26th. The eighteen games lost as a result, have probably ended his shot at becoming a member of the .300/30 HR/100 RBI club in his age 21 season, but it's possible he'll end up only a few short in the runs driven in column. Montero had a solid night, hanging in well against the southpaw and getting a pair of hits off Wolf, in addition to the intentional walk. Ryan Roberts had a pair of walks. 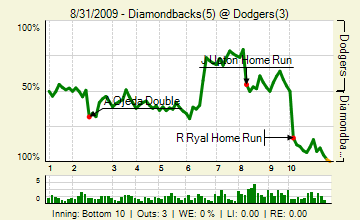 Five in a row for the Diamondbacks - and five recaps in a row from me. Coincidence? I guess we'll see tomorrow, when it's back to Chavez Ravine for more fun in Hollywood. I'd settle for more of the same, certainly.